Turkey a 'political war zone' on eve of elections

Turkey's leaders look to Syria as a distraction from the latest domestic political crisis; the US Congress considers new sanctions on Hezbollah; Al-Monitor expands coverage of Russia and the Middle East. 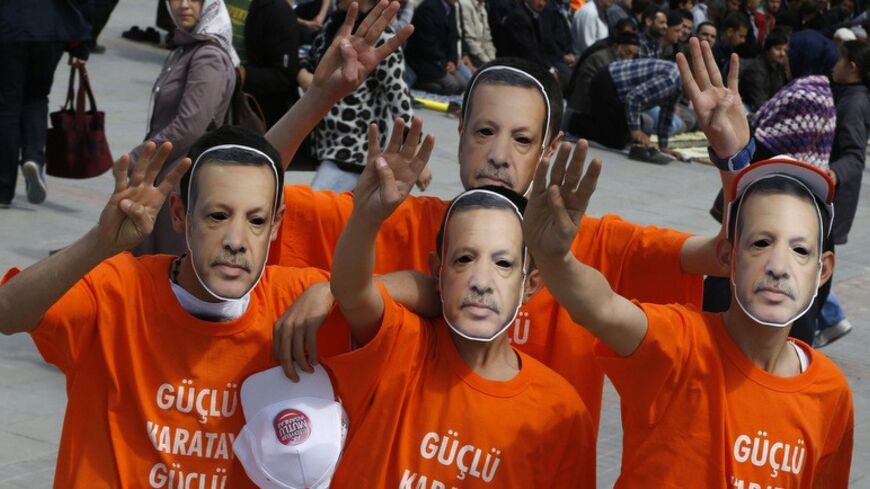 Turkey’s municipal elections campaign became consumed by the political crisis which swept the country and social media this week.

On March 27, an audio tape was posted on YouTube appearing to capture a conversation among four of Turkey’s top national security officials, including Foreign Minister Ahmet Davutoglu and intelligence chief Hakan Fidan, discussing orchestrating an attack on the Tomb of Suleiman Shah, the grandfather of the founder of the Ottoman Empire, which is just over the border in Syria but which Turkey considers its territory, as a pretext for a military action in Syria.

The leak led the government to deny Internet users access to YouTube just one day after a Turkish court overturned an earlier government ban on Twitter.

On March 23, a Turkish F-16 shot down a Syrian MiG-23, which Kadri Gursel suggested could have been a useful distraction to energize popular support for Prime Minister Recep Tayyip Erdogan as he rallies voters for his Justice and Development Party (AKP).

The preoccupation with a rationale for action in Syria was also evident in Turkish military preparations to defend the tomb following a threat from the Islamic State of Iraq and al-Sham (ISIS), as Fehim Tastekin reports. Davutoglu has alleged that ISIS is allied with the Syrian government.

Kemal Kilicdaroglu, the leader of Turkey’s opposition Republican People’s Party (CHP), told Amberin Zaman this week: "Erdogan recognizes that he is in trouble. That is why he wants to go to war with Syria. We raised the issue of the Tomb of Suleiman Shah [the grandfather of the founder of the Ottoman dynasty whose tomb is protected by Turkish troops]. They instantly shot down the Syrian plane. They are doing their best to go to war against Syria, to drag us into that quagmire. To this end, they are playing good cop, bad cop with al-Qaeda. They tell al-Qaeda, 'Go attack and tear down our [Turkish flag raised over Suleiman Shah’s tomb] so we have an excuse to go in.' Syria is no threat to Turkey. The whole world knows this. The Syrian plane was a reconnaissance plane that was seeking al-Qaeda targets. By shooting it down, they helped al-Qaeda."

The bans on Twitter and YouTube provoked criticism from European and US officials and, as Cengiz Candar writes, "Erdogan and associates continued with their established practice of blaming the Gulen movement for its troubles, accusing it of bugging the 'Syria war planning' meeting and for its disclosure via the Internet. They labeled the incident as an 'espionage offensive,' signaling the possibility of a witch hunt after the March 30 municipal elections."

Mustafa Akyol agrees "it is undeniable that Turkey is in a downward spiral toward authoritarianism, in part because the government feels threatened by hidden enemies using effective tactics — including wiretapping, hidden cameras and other forms of espionage — and is therefore responding with extreme measures, such as blocking Twitter and YouTube."

Akyol adds, “The March 30 elections are so significant, because they will show how popular the government’s alarmism is concerning its hidden enemies,” concluding, "If Erdogan wins big, a dark era will begin for all the 'traitors' at whom he has been pointing his finger. If he instead faces his first political setback, the war of attrition against him, especially by those veiled forces behind the wiretaps, will probably push for a bigger fall. In any case, Turkey is likely to continue to be a political war zone in the months to come, at least until the presidential elections scheduled for August 2014."

Henri Barkey describes Turkey as on "the road to Fahrenheit 451." He writes: "The lesson from Turkey is that a secretive and nontransparent government can easily be unhinged by the almost instant free flow of information. And when it becomes unhinged, it will resort to all possible means to contain the flow. When it undoubtedly fails, it will resort to increasingly more draconian measures."

UPDATE: Since this piece was published earlier today, March 29, a Turkish court banned media coverage of the leaked audio tapes. The question is whether the vote on March 30 will be marred by media controls and perhaps other improprieties, as Erdogan seems bent on winning at all costs. And then the question will be whether President Abdullah Gul, who has already gently yet clearly distanced himself from Erdogan on Syria, social media controls and other issues (as has been reported by Al-Monitor), may consider taking a stand on those actions of the prime minister which are dividing and destabilizing Turkey. If Gul takes such a stand, then attention will be on the reaction of the United States and Europe, which are seemingly running out of patience with the prime minister’s erosion of Turkey’s democratic institutions.

HFAC ranking member Rep. Eliot Engel, D-N.Y., who is leading this effort with chairman Ed Royce, R-Calif., told Al-Monitor that "at a time when we're sitting and negotiating with Iran over their nuclear program, they continue to do mischief with terrorist groups like Hezbollah. It irks me."

Iran and Hezbollah are already subject to myriad sanctions, so the question is what more can actually be done, and how to target Hezbollah without harming Lebanon’s banking sector, which could disrupt the country's fragile economy.

The general bipartisan consensus not to pursue further Iran sanctions while the nuclear negotiations are ongoing has troubled some members of Congress who argue that even more economic pressure on Iran is necessary if there is even the slightest chance for Iran to take the steps necessary to roll back its nuclear program.

"As I've always said, I hope these negotiations work — I hope they go well — that in six months we have a nice agreement," Engel said. "I have my doubts, but I hope I'm proven wrong. But I still don't trust the Iranians acting in good faith. If they were acting in good faith, they wouldn't be enriching while we're having negotiations and they wouldn't be siccing their terrorist organization Hezbollah on the rest of the world."

Engel and others who support this effort may view sanctions on Hezbollah as a means to weaken Iranian and Hezbollah support for Syrian President Bashar al-Assad.

This column has consistently argued that the United States should engage Iran about Syria, and that “a discussion with Iran about Syria is a prelude to a broader discussion about Hezbollah, which is at the crux of the US tagging Iran as a state sponsor of terrorism.” There will not be sanctions relief for Iran absent some shift in Hezbollah’s role. This is all of a piece with developments in Lebanon, Syria, Israel and Russia, as this column has laid out in detail.

Paul Saunders writes this week that Russia is not yet ready to "retaliate" or shift its Iran policy in response to Crimea, unless the crisis with the West deteriorates further.