Turkey’s main opposition leader, Kemal Kilicdaroglu of the Republican People’s Party, says that the Turkish prime minister is bent on provoking war with Syria to divert attention from government corruption. 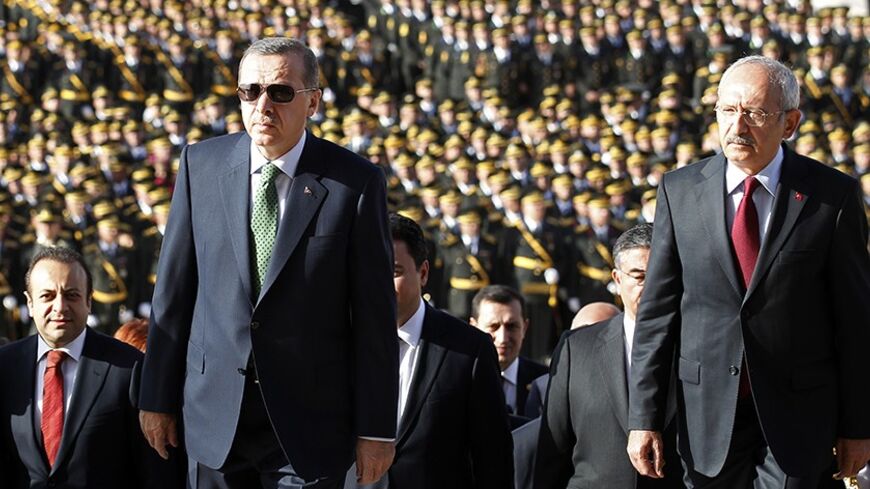 “The world’s most immoral man is currently occupying the Turkish prime minister’s seat. He wants to drag Turkey into a war against Syria.”

This was how the leader of Turkey’s secular main opposition Republican People’s Party (CHP), Kemal Kilicdaroglu, described Prime Minister Recep Tayyip Erdogan in an interview with Al-Monitor. Speaking en route to the western province of Manisa for a string of campaign rallies, Kilicdaroglu was uncharacteristically agitated. He had just listened to a taped conversation that allegedly took place between Erdogan and an unidentified aide. It was among the latest in a slew of leaked recordings linking the prime minister, his family and political allies to massive corruption charges.

In this instance, a man alleged to be Erdogan talks about disseminating incriminating videos of unnamed CHP officials. Kilicdaroglu insisted that Erdogan was referring to the leaked sex video of former CHP leader Deniz Baykal that prompted his resignation in 2010 after nearly two decades at the helm.

“We now know who was responsible for this plot: Erdogan,” Kilicdaroglu claimed. “This is worse than Watergate. He must resign.”

Yet, with only three days left before nationwide local elections on March 30, even Kilicdaroglu acknowledges that the tapes will have little if any impact on voters. Opinion polls continue to show Erdogan's Justice and Development Party (AKP) comfortably in the lead, though the gap is narrowing in the two biggest cities, Ankara and Istanbul. In a last-minute maneuver, however, Erdogan has lowered the bar for victory to the 38% the AKP won in the 2009 local elections instead of the 50% that swept it to power for a third consecutive term in the 2011 parliamentary race. This, in turn, has raised the bar for the CHP.

A senior CHP source told Al-Monitor, “Our success can no longer be measured by winning either Ankara or Istanbul while getting at least 30% of the vote, but by the extent to which the AKP falls below the 38% mark set by Erdogan.” And should the AKP get more than 40%, “Turkey will enter a dark and turbulent period in which personal liberties and the rule of law will be further eroded,” asserted Kilicdaroglu, whose own standing in the CHP is also at stake. A small but vocal group of militant Kemalists within the CHP resent his efforts to break their age-old grip and to reform the party by, among other things, wooing Kurds and liberals.

In November, Kilicdaroglu became the first CHP leader in 37 years to set foot in Washington. Yet he has not campaigned in any of the mainly Kurdish provinces, save his own native Tunceli, ahead of the elections, on the flimsy excuse that the Kurds only vote for their own Peace and Democracy Party. Well then, why not make an effort to win some over?

Indeed, Kilicdaroglu’s strategy of trying to strike a balance between the reformists and the old guard has left many wondering what the CHP really stands for. Yet the former bureaucrat has one attribute that is more prized than most these days: He has never been implicated in a corruption scandal.

Getting Turkey’s oldest political party to modernize is a must if the country's wobbly democracy is to take root, argues Aykan Erdemir, a young CHP lawmaker and a poster boy for change. The Harvard-trained anthropologist is an expert on Turkey’s minority Alevis, whose faith is an offshoot of Shiism and is practiced by Kilicdaroglu. If Erdemir is correct, more than the CHP’s future hinges on the outcome of the March 30 elections.

Al-Monitor:  What was your reaction to the new leaked recordings?

Kilicdaroglu:  That voice, it belongs to the prime minister. He talks about images and about Baykal and says they need to be disseminated. The truth has emerged. It is Erdogan who masterminded this plot. From here on, that man should no longer be occupying the seat of the prime minister. There can be no place for a prime minister who violates the privacy of people’s homes, who has made immorality his guiding principle.

Al-Monitor:  Were you surprised?

Kilicdaroglu:  We had heard similar allegations before, and what we now have matches the results of our own investigation [of the leaking of the Baykal sex tapes] 100%.

Al-Monitor:  Where did you hear the allegations?

Kilicdaroglu:  There is a group of people around the prime minister who feel guilty for letting themselves be used by him in these schemes. … I cannot reveal their names for obvious reasons. What I can tell you is that the prime minister has set up three different teams: one that does the recording, another that feeds the tapes to the media and then there is a third team. … I do not remember now what their job is. The Watergate scandal seems innocent in comparison.

Al-Monitor:  Various Nationalist Action Party lawmakers were forced out of politics because of similar tapes.

Kilicdaroglu:  Yes, it’s all part of the same scheme.

Al-Monitor:  But the prime minister blames Fethullah Gulen and his followers for all of this.

Kilicdaroglu:  It’s the prime minister who issued the orders [for the Baykal tapes to be released], and it’s the men closest to him who carried out his orders. Erdogan even said which Internet site the tapes should be posted on. Why were the perpetrators not apprehended? It's because the real perpetrator is sitting in the prime minister’s seat.

Al-Monitor:  Do you believe that the AKP can win around 40% of the vote, as it claims it can?

Kilicdaroglu:  No, I do not. But if they do, this means we will wake up to an even darker Turkey. But I do not believe that the people of this country will sanction such immoral behavior. [Erdogan] sees himself as the sole ruler. He sees himself as the embodiment of the Turkish state.

Al-Monitor:  But there are many who say, “Erdogan may be a thief, but he also gets things done.”

Kilicdaroglu:  To that I would say, “Would you entrust your shop, your home, to a thief?” No. Then why entrust your country to such a person? He builds a road that costs 100 liras for 500, and pockets the difference.

Al-Monitor:  The prime minister insists that the AKP is crucial to economic stability.

Al-Monitor:  How do you assess recent developments between Turkey and Syria?

Kilicdaroglu:  Erdogan recognizes that he is in trouble. That is why he wants to go to war with Syria. We raised the issue of the tomb of Suleiman Shah [the grandfather of the founder of the Ottoman dynasty whose tomb is protected by Turkish troops]. They instantly shot down the Syrian plane. They are doing their best to go to war against Syria, to drag us into that quagmire. To this end, they are playing good cop, bad cop with al-Qaeda. They tell al-Qaeda, “Go attack and tear down our [Turkish flag raised over Suleiman Shah’s tomb] so we have an excuse to go in.” Syria is no threat to Turkey. The whole world knows this. The Syrian plane was a reconnaissance plane that was seeking al-Qaeda targets. By shooting it down, they helped al-Qaeda.

Al-Monitor:  Has anyone from the Turkish armed forces approached you to voice concern about the government’s Syria policy?

Kilicdaroglu:  I do not wish to go into any details, but suffice it to say that everybody is concerned because a man who is in a poor mental state is running the country.

Al-Monitor:  Who do you believe is in charge of Turkey’s foreign policy?

Kilicdaroglu:  One of the basic characteristics of dictators is that they are cowards. When they get scared, they resort to repression.

Al-Monitor:  The prime minister attacked the European Union in his most recent speech.

Kilicdaroglu:  His state of mind is truly fragile. He is randomly attacking everyone. He is a bizarre man who has made this his ruling style. May Allah protect Turkey.

Al-Monitor:  Do you believe Erdogan still has a chance of becoming president?

Al-Monitor:  How would you asses the position of the current president, Abdullah Gul?

Kilicdaroglu:  After he approved the law that imposed new restrictions on the use of the Internet, he lost the trust of the people. He is now trying to make amends for this, but it's very tough.

Al-Monitor:  And the Kurdish peace process?

Kilicdaroglu:  The government cannot monopolize the peace process. In any case, someone who has made a principle of corruption, of immoral behavior, cannot solve this problem. Turkey has an Erdogan problem.

Kilicdaroglu:  Our proposal is clear. An interparliamentary commission, together with a council of wise men, needs to be established. They should be the interlocutors. But in the end, of course, it falls upon the state to solve the problem. When we come to power, we will find out from the national intelligence agency MIT [which has been holding talks with Ocalan] what has been done so far. We are not shutting the door to any formulas.