In an interview with Al-Monitor, Turkey’s main opposition leader, Kemal Kilicdaroglu, said it is unlikely the AKP will be able to form a coalition government and expressed the urgent need to turn the economy around. 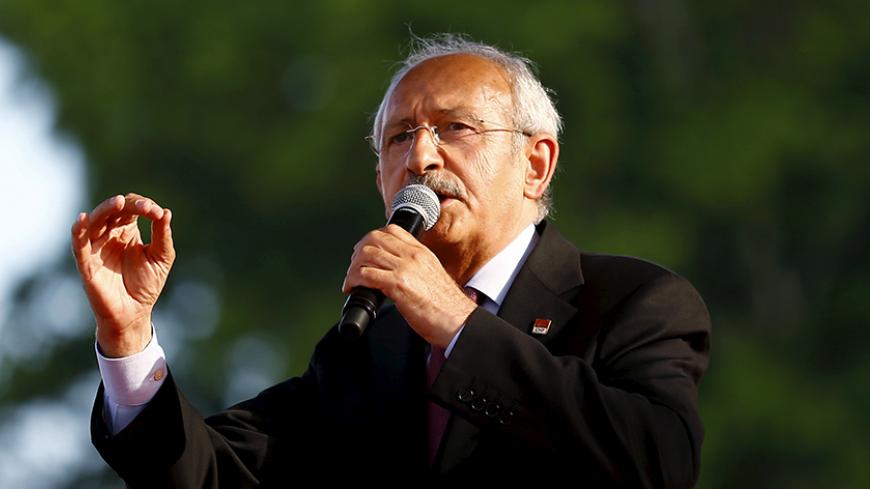 The formation of a coalition government in Turkey following last month's parliamentary elections will be difficult, so the country is most likely headed for early elections, according to Kemal Kilicdaroglu, chairman of the Republican People’s Party (CHP), the second-largest faction in parliament. In an interview with Al-Monitor, Kilicdaroglu assessed the tough political equation produced by the June 7 polling results and explained his party’s position on the upcoming coalition talks.

The elections saw the ruling Justice and Development Party (AKP) lose its majority after almost 13 years in power. The three opposition parties had pledged to hold the AKP accountable in light of corruption allegations and curb President Recep Tayyip Erdogan’s clout. Riven with disagreements, however, they have thus far failed to coalesce around a joint position, and in one example, allowing the AKP to grab the speaker’s office with the selection of Ismet Yilmaz July 1. In particular, the far-right Nationalist Action Party (MHP) has developed a deeply hostile attitude toward the Kurdish-dominated Peoples’ Democratic Party (HDP).

Kilicdaroglu said the CHP favors the continuation of the faltering Kurdish settlement process, but he stressed that it should advance in a transparent manner. He also voiced concerns about Turkey’s economic situation and the growing number of Syrian refugees in the country, stressing that a second generation of Syrians was emerging in the country, with 90,000 Syrian babies born on Turkish soil thus far.

Al-Monitor:  AKP Chairman Ahmet Davutoglu will soon receive the mandate to form a government and start making the rounds for a coalition. What’s the CHP position here? Is an AKP-CHP coalition possible?

Kilicdaroglu:  We’ll be able to discuss this once we have met with Mr. Davutoglu. We don’t know what proposals and suggestions he will bring along. But one thing is known: our 14 guidelines for a coalition. We have appealed to the other parties to announce their guidelines too. I think an important part of our guidelines will not suit the AKP, its policies and its understanding of governance. I don’t think they will agree to them, but still, we’ll see once they put forward their own guidelines and proposals.

Al-Monitor:  Do you think an agreement could be possible on a CHP-AKP coalition protocol for a limited period of at least two years that involves a consensus on the economy, democratization and the advancement of fundamental rights?

Kilicdaroglu:  The state of the economy is not promising at all. Mr. Ali Babacan [deputy prime minister for the economy] is well aware of this. That’s why he is keeping quiet. Exports have been in decline for several months now. Most recently, imports too have fallen, by more than 14%. This means that output is contracting as the import of intermediate goods and semi-products is decreasing. Automotive exports appear to be on the rise. But, with the impact of the foreign exchange rate, the amount of dollars flowing in is decreasing despite the increasing exports.

There is also a significant downturn in the tourism sector due to the crisis in Russia and the conflict environment surrounding us. European countries have been warning their citizens not to travel to Turkey or to be cautious. Hence, the economic situation requires some urgent measures and decisions, but a caretaker government is in place, so those measures cannot be taken. Because of the possibility of early elections, the required decisions are being postponed. It seems things will be delayed.

Meanwhile, in our 14 guidelines, we have outlined steps to be taken with respect to democratization, fundamental rights, the judiciary and the bureaucracy as well as urgent measures concerning social policies, pensioners, workers, jobless people and millions of families without social security. We have called for a clampdown on corruption. This is one of our priorities. If the AKP displays a positive approach on these points, we can sit down and talk, put all these points in a protocol, draw up a timetable, reach a binding agreement on what steps are to be taken and when, sign it and have a coalition.

An urgent restoration, a speedy overhaul, is needed in the judiciary and the bureaucracy. We need to pave the way for that. A coalition with the AKP could become possible provided that it is based on democratization, the restoration of the judiciary and the bureaucracy, the expansion of fundamental rights and freedoms, and transparency in the [Kurdish] settlement process. The justice system in the country is all but ruined. The constitution and the laws are not being implemented. Judicial rulings are not being implemented either. But, as I already said, the AKP would hardly accept these guidelines. So, I see the likelihood [of a coalition] as very low.

Al-Monitor:  Do you think the likelihood of an AKP-MHP coalition is higher?

Kilicdaroglu:  Yes. I think an AKP-MHP coalition or an HDP-backed AKP government could be more likely. And beyond all these options, I believe the likelihood of early elections is increasing.

Kilicdaroglu:  In case of early elections, we’ll have no losses [in our vote]. A certain vote migration, however, is possible between the AKP and the MHP, which would naturally change the current outlook.

Al-Monitor:  In the current picture, the MHP’s attitude toward the HDP rules out the possibility of a CHP-MHP coalition. But still, is any fresh initiative possible on this issue?

Kilicdaroglu:  I’ve appealed on them to form a [three-way coalition] government, as we are the parties that represent 60% of the voters. My appeal is still valid. But the outcome of the election for parliament speaker shows that this, too, is difficult. From my point of view, a party should not index its steps and policies to the steps and policies of another party. The MHP is criticizing us for not supporting their candidate [for parliament speaker]. Yet, even if we had backed Mr. Ekmeleddin Ihsanoglu, he would have still needed HDP support to get elected. We had discussed this with him when he visited us [before the vote].

The MHP says they won’t vote for anything the HDP votes for, that they won’t stand anywhere the HDP stands. It’s up to them to decide their policies, of course. But what will they do if a proposal comes to parliament tomorrow to re-open the probe into the corruption allegations against the former minister [who resigned amid the corruption scandal the erupted in December 2013]? Will the MHP say they won’t support the proposal if the HDP supports it too? It’s an issue on which all three parties made promises to their electorate. We made common or similar pledges on many other issues. What will the MHP do when these matters reach parliament’s agenda? Are they going to say they are not on board because the HDP also backs them? Isn’t it obvious who benefits from this approach?

Al-Monitor:  There is talk about war scenarios and possibilities of intervention in Syria. In the meantime, problems concerning Syrian refugees are growing, especially in provinces such as Hatay and Adana, and so are the worries of the populace in these cities. Armed militants are rampant in urban areas. How will this situation be resolved?

Kilicdaroglu:  We don’t know the [actual] number of Syrian refugees. We use the 2 million figure just because some people say so, but no one knows what the real number is. And it’s not only Hatay and Adana. Serious problems exist with regard to Syrian refugees in many provinces, especially Gaziantep, both economically and socially. I know that an assessment presented at the latest meeting of the National Security Council [on June 29] included information that the number of Syrian children born in Turkey had reached 90,000. So, there are now thousands of second-generation Syrians born in Turkey, and the situation is getting worse.

Al-Monitor:  ​In the run-up to the elections, the president and the ruling party voiced a changed rhetoric and attitude vis-à-vis the [Kurdish] settlement process, an approach that rejects the process. What is the CHP’s position on the settlement process? What will be your stance on this issue in the coalition talks?

Kilicdaroglu:  ​We maintain the position we have had from the very beginning. There is no change in our attitude. We have said that the settlement efforts should continue, that the Kurdish problem should [be resolved] on peaceful, reconciliatory and democratic grounds. We still say the same. Yet, while supporting the process, we always said that it should be transparent and proceed in front of the public eye, with no secret bargaining behind closed doors, that it should advance under the parliament’s roof with the broadest participation possible, without any secret promises and irrevocable pledges to anyone and with the opposition and the whole public kept informed about it. During the past legislative term, we submitted many draft laws on the issue. The AKP rejected all of them. Then, [last year] they brought forward [and passed] their own legislation, which also said the related work would be carried out in parliament and that information on how the process progressed would be released to the public once every 15 days or in other intervals. Has there been any statement so far? No. Has the public been informed? No.

That’s the point we’ve been making from the very beginning. The AKP is not sincere and honest about the settlement process. It kept exploiting the issue for its own political interests and election calculations. It sought to conduct the process in secrecy, without sincerity and transparency … behind closed doors. Its attitude remains unchanged, lacking sincerity, honesty and credibility.