Turkey’s Kurdish leader: We will struggle on in parliament ‘till the end’ 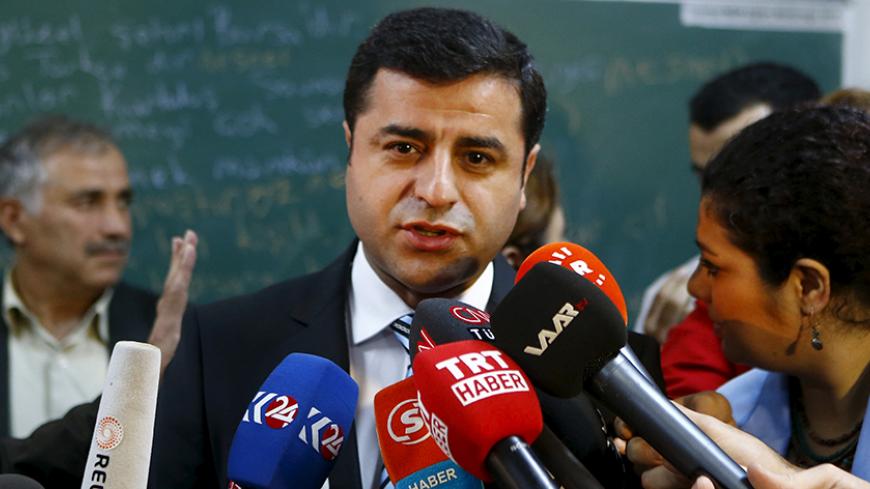 Selahattin Demirtas, co-chairman of the pro-Kurdish Peoples' Democratic Party, talks to the media before casting his ballot at a polling station during a general election in Istanbul, Nov. 1, 2015. - REUTERS/Osman Orsal
Sukru Kucuksahin
March 7, 2016

After two decades, parliament members from Turkey’s Kurdish movement are again under the threat of losing their judicial immunities, and then probably their seats. In 1994, parliament voted to lift the immunities of six Kurdish lawmakers, among them the iconic Leyla Zana, after which they were rudely put into police cars waiting at parliament’s gate and whisked away. The deputies stood trial for collaborating with the Kurdistan Workers Party (PKK), which Ankara considers a terrorist group, and some ended up with lengthy jail terms. The image of the unprecedented arrests outside parliament has haunted Turkey ever since. The Justice and Development Party (AKP) used to be a vocal critic of this episode, but today the ruling party has launched its own drive to strip at least five deputies of the Kurdish-dominated Peoples’ Democratic Party (HDP) from their judicial immunities, among them party co-chairs Selahattin Demirtas and Figen Yuksekdag, on similar charges of supporting terrorism.

In an interview with Al-Monitor, Demirtas asserted the HDP would not walk out of the legislature even if the AKP’s drive succeeded, vowing to “stay in Parliament till the end and struggle on.” He said the HDP would seek international support, but voiced pessimism over prospects of peace under the government’s current policies.

The text of the March 6 interview follows:

Al-Monitor:  You and your party are under harsh criticism [for supporting terrorism]. How would you assess the accusations?

Demirtas:  Government attacks and slanders against the HDP are not something new. The AKP openly made us a target after we decided to contest the June 7 elections [in 2015] as a party and not with independent candidates. The onslaught intensified after we overcame the 10% parliamentary threshold [and took away dozens of seats from the AKP in the Kurdish-majority southeast]. The settlement process was over, and new pressures began. Turkey was dragged into conflict, and they wanted to pin the blame on us. Because of the heavy pressures, we failed to preserve our vote in the Nov. 1 polls. They are now trying to push our party into a very tough spot, though we had emerged as the hope for [peaceful] co-existence in Turkey. We had inspired hope for democratization, the solution of the Kurdish problem, equal representation for different communities and co-existence without partition. Attacking the HDP is equivalent to attacking this hope. Turkey is already very gloomy because of the AKP’s policies, and now the intensified onslaught on the HDP is taking the desperation to a new high. The suffering in the southeast is transforming the sharp polarization into a deep rift. The other parties have no policies aimed at keeping Turks and Kurds together. This has been a concern only for us, and hence the pressure on the party is nourishing desperation in society.

Demirtas:  I haven’t come across anyone speaking of being deceived, but, yes, people say and write such things. Everyone must see, however, that the AKP is the party that deceived the whole country. It promised peace and stability if it returned to power alone [in the Nov. 1 polls]. It got what it wanted, but bombs are exploding and people are dying today. The HDP is not responsible for any of this. It did not and will not go back on any of its promises. We said we are the [answer for] peace, and we’ll keep our word. Yet the reality of war is pushing Turks and Kurds to opposite poles. The situation is not very promising. The government has blocked all channels of dialogue and has no plan to return to the negotiating table. It pursues a policy that benefits from war and the climate of conflict, speaking of nothing but war and operations. With the government maintaining this attitude, any hope for peace seems unlikely in the short run.

Al-Monitor:  There is also the prospect of HDP lawmakers being stripped from their judicial immunities.

Demirtas:  That’s hypocrisy. They have long used this as a means to blackmail and intimidate us, dangling it as the sword of Damocles over us.

Demirtas:  Yes, immunities could be lifted this time. They want to go through with it. But we have never bowed down. Moreover, we have put forward two proposals on the issue — to amend the constitution and keep only legislative immunity [for speeches] or take up all immunity files waiting in parliament [for all kinds of offenses]. Yet they shy away from this, turning the lifting of immunities into an instrument of punishment. Such punishments would not be a bother for me and my colleagues, but they open scars that remain sore for years. The decision against Leyla Zana and her colleagues is still alive in the memories. Political rivalry and arguments should remain confined to politics, without turning into revenge taking and score settling. Turkey is not in good shape. Things would get even worse [if immunities are lifted].

Al-Monitor:  How strong do you think this possibility is?

Demirtas:  The AKP is currently testing the waters with public sentiment and seems determined to go ahead. We are working to prevent this from happening. We’ll do our best for common sense to prevail. But even if our immunities are lifted, we’ll carry on our struggle. I have no fears whatsoever for myself, and neither do my colleagues. What we fear about is Turkey’s future.

Al-Monitor:  What do you expect from the legal process if your immunities are lifted?

Demirtas:  There will be no legal process in the first place, for the judiciary is completely politicized. The situation is worse than the eras of state security courts and military coups. So we don’t expect fair trials. … What [the government] is trying to do is to stoke chauvinism and consolidate its base by lynching us.

Al-Monitor:  Are you going to raise the issue internationally?

Demirtas:  We have strong relations across the world. To make sure the international community does not stay silent, we’ll bring up the issue in all our [international] meetings and set our contacts in motion.

Al-Monitor:  Will the HDP consider pulling out from parliament if immunities are lifted?

Demirtas:  Pulling out from parliament has never been on our agenda. We’ll stay in parliament till the end and struggle on.

Al-Monitor:  Why do you think Prime Minister Ahmet Davutoglu criticized you for attending Friday prayers recently? Was it your first Friday prayer?

Demirtas:  No, it was not. I’ve been to Friday prayers many times, and this is nobody’s business. … They attack us because the AKP seeks to exploit religion [to lure support from the Kurds] and they think this weapon will be taken from them. [The Friday prayer] challenged the AKP’s mindset, which sees Muslims and Islam as its own property and monopoly, so that’s why they were annoyed.

Al-Monitor:  Minutes of meetings with [jailed PKK leader Abdullah] Ocalan have been published. It turns out you carried messages between Ocalan and Saleh Muslim, the head of the Democratic Union Party of the Syrian Kurds.

Demirtas:  True, there were a few mutual messages coming and going. But that’s not the real issue here. The real issue is that the AKP builds both its domestic and foreign policy on enmity against the Kurds. The Kurdish people are their greatest paranoia. As a result, they are creating lots of new areas of problem and tension. They failed to overcome their enmity during the settlement process, too, and that’s why they failed to obtain results. Then they openly declared their enmity and started a war. So this enmity is sustained in the person of Saleh Muslim as well.

Al-Monitor:  Reports of fresh operations are coming from the southeast. Where is this going to lead?

Demirtas:  Security forces, PKK members, youngsters — they are all dying, and, sadly, this course of events cannot be stopped. The end of the bloodshed depends entirely on the government’s management approach. The government, however, has refused to draw up any peace plan. Establishing peace and tranquility is not the PKK’s but the government’s responsibility. They are obliged to do it, for this is what they promised the people. The government, however, is expecting the PKK to do it, while holding the HDP responsible. And the Turkish public is under the influence of this perception management.

Al-Monitor:  There is talk of early election scenarios, and some suggest the HDP will fail to pass the parliamentary threshold this time.

Demirtas:  That’s actually the AKP’s open strategy. In case of early elections, the want to obtain a [parliamentary] strength that allows them to unilaterally change the constitution. For that purpose, they are playing all dirty games at their disposal to leave the HDP under the threshold.

Al-Monitor:  Is there such a possibility?

Demirtas:  We are still preserving the same vote.

Al-Monitor:  Shall we expect any change in your attitude on [President Recep Tayyip Erdogan’s ambition to introduce] a system of executive presidency?

Demirtas:  There is neither a reason nor a justification for a presidential system. The four parties [in parliament] tried to achieve a consensus, but it seems we stand no chance of sitting down and drafting a new civilian, libertarian constitution with the AKP under the current circumstances. If the AKP attempts to impose its own constitution [draft] — and that’s what they intend to do — we are not going to back it.