The leader of Turkey’s main Kurdish party faces up to 143 years in jail on terror-related charges and is languishing in jail as the country heads to a fateful referendum. 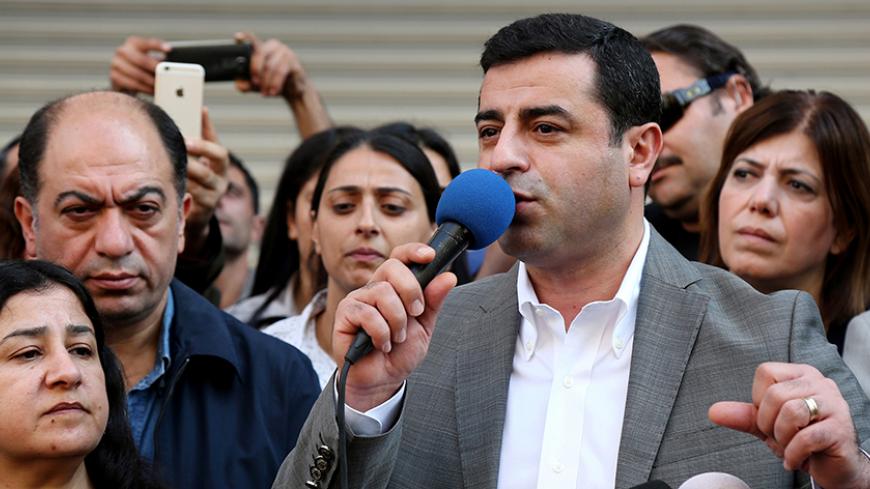 Selahattin Demirtas, co-leader of the pro-Kurdish Peoples' Democratic Party (HDP), talks during a gathering to protest the arrest of the city's two joint mayors on terrorism charges, in the southeastern city of Diyarbakir, Turkey, Oct. 30, 2016. - REUTERS/Sertac Kayar

On March 17, 2015, Selahattin Demirtas, the co-chair of the Kurdish-dominated Peoples’ Democratic Party (HDP), delivered the shortest speech in Turkish parliamentary history. “We won’t let you become an executive president,” he proclaimed at his party’s weekly parliamentary meeting, repeating the sentence three times. The HDP leader was addressing President Recep Tayyip Erdogan, whose drive to install a presidential regime was already a major theme ahead of general elections in June of that year.

An advocate of a peaceful solution to the Kurdish problem, Demirtas led the HDP to a historic breakthrough in the elections. In the raucous campaign season, he stood out as a moderate figure with a sharp and witty intellect, often singing and playing saz during television interviews that defied Turkey’s somber political culture. The peace process between Ankara and the Kurds was not yet officially dead, and the HDP, boosted by Demirtas’ charisma, managed to garner support from voters beyond its Kurdish base. While the HDP won 80 seats in the 550-member parliament, the ruling Justice and Development Party (AKP) lost its majority for the first time since 2002. Soon, however, the peace process collapsed and fighting resumed between the outlawed Kurdistan Workers Party (PKK) and the security forces. In five months’ time, Erdogan’s maneuvers led to snap elections that restored the AKP’s parliamentary majority and weakened the HDP. Ankara’s ensuing crackdown on the Kurdish movement culminated in Demirtas’ arrest in November 2016.

Leader of the third-largest party in parliament and once a presidential candidate, Demirtas now stands accused of being a “terrorist.” According to the prosecutor’s indictment, Demirtas serves on the political leadership wing of the Kurdistan Communities Union (KCK), a PKK-led illegal organization accused of seeking to create an independent Kurdistan in Turkey’s eastern and southeastern provinces, and is also a leader in the Democratic Society Congress, which is a legal umbrella group for Kurdish organizations.

The evidence the prosecutor presented includes telephone conversations between Demirtas and KCK members, an alleged KCK letter that mentions his name and a picture published in the press showing him in the company of KCK members.

In remarks to Al-Monitor, Demirtas’ lawyer, Mehmet Emin Aktar, described the charges as “ridiculous,” stressing that illegally obtained wiretaps cannot serve as evidence. “Neither Demirtas nor the HDP aim to create an independent Kurdistan. On the contrary, their policies aim at embracing whole Turkey and [Kurdish] integration with Turkey,” he said.

The bulk of the indictment pertains to demonstrations, rallies and other events Demirtas attended. He faces charges for taking part in celebrations of Nowruz, the traditional Kurdish new year, at times and places where the celebrations were banned, supporting a campaign for Kurdish-language education in schools, attending the alternative Friday prayers that Kurds held in the southeast several years ago, calling protests against curfews in Kurdish regions and attending the funerals of slain PKK militants.

“What Demirtas was saying in the streets was the same of what he was saying in parliament. The charges against him breach [the principle of] parliamentary immunity,” Aktar said.

Certain expressions Demirtas has used are also presented as incriminating evidence in the charge sheet. His description of military operations in the southeast as “massacres” and his referral to PKK members as “guerrillas” and to jailed PKK founder Abdullah Ocalan as a “people’s leader” are all deemed to constitute praise of crime and criminals.

The most critical accusation pertains to the 2014 events surrounding the Islamic State’s (IS) assault on Kobani, the Syrian Kurdish town across the Turkish border. In October that year, the HDP called on Turkey’s Kurds to take to the streets to protest the assault and Ankara’s failure to offer any help to the Kurds. The crowded protests degenerated into clashes between HDP supporters and Islamist Kurds, including IS sympathizers. The three-day unrest claimed 45 lives, including two police officers, and left about a thousand people injured. Yielding to international pressure, Ankara eventually opened a corridor for Iraqi Kurds to deliver assistance to Kobani.

In the charge sheet, Demirtas is accused of being responsible for and even “inciting” the deadly street violence.

His lawyer countered, “During the unrest, Demirtas appealed for an end to the violence. Later, he even submitted a proposal in parliament for an investigation into the incidents. The proposal was voted down by AKP deputies. The perpetrators responsible for the deaths are yet to be found, and the cases have remained inconclusive so far. In other words, the state has failed to find the perpetrators of the murders but is holding Demirtas and other [HDP] deputies responsible for the incidents.”

In the 500-page indictment, the prosecutor levels a total of 12 charges against Demirtas, including leadership of a terrorist organization, spreading terrorist propaganda and incitement, demanding up to 143 years in prison for the HDP leader.

Demirtas, for his part, has refused to answer the charges, holding Erdogan responsible for his arrest. “I refuse to be an extra in this judicial farce, launched on Erdogan’s orders. … Only my people and voters can question me politically over my political activities,” he wrote to the prosecutor.

While Demirtas and 11 other HDP lawmakers remain behind bars, Turkey is counting down to a referendum on constitutional changes designed to introduce the presidential system, to which Demirtas had vocally objected two years ago. The court has rejected Demirtas’ plea to be released and adjourned his trial to a date after the referendum, which is expected to take place in April. What is perhaps even more striking than the jail term sought for Demirtas is that Turkey is heading to a fateful referendum under a nationwide state of emergency, with a prominent opposition leader and lawmakers locked up in jail.