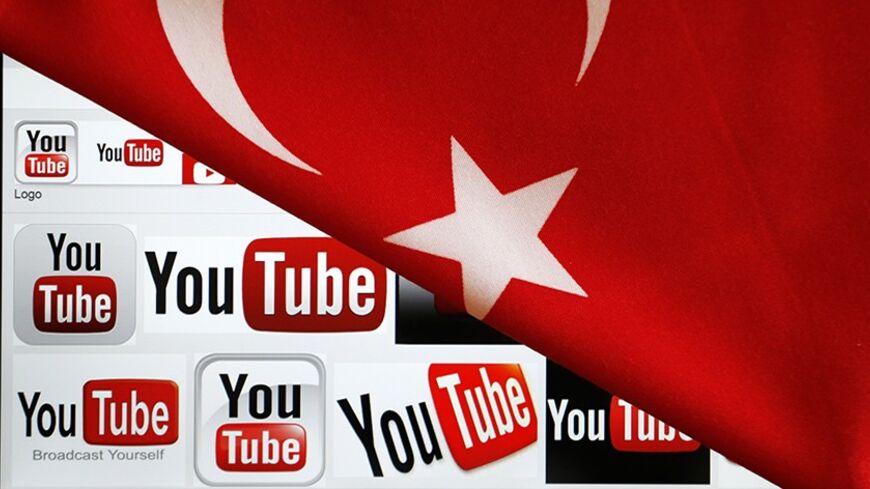 On Thursday, March 27, Turkish Prime Minister Recep Tayyip Erdogan took to the stage at an election rally, and with a choked, screeching voice claimed he is surrounded by an “evil alliance” trying to bring him down. He further asked for people’s support to bring about a record-breaking victory in this Sunday's local elections. Then, a new audio surveillance recording was leaked on YouTube, revealing Turkey’s top state bureaucrats discussing preparations for plotting a war against Syria. Within a few hours, Turkey’s Communication Directorate (TIB) blocked access to the popular video-sharing website. The TIB also blocked access to Twitter beginning March 21, and there is speculation that Facebook will be blocked soon as well.

“This is yet another controversial decision by the TIB,” Ersan Sen, an Istanbul-based lawyer, told Al-Monitor. “There is no legal justification for this blocking. However, this government has granted judicial immunity to some key state officials and institutions, including the TIB. Although theirs is professional misconduct, they have judicial immunity.” Sen added, “That aside, there is all sorts of wrongdoing with that leaked audio surveillance recording. It’s first of all a spying activity.”

Umit Ozdag, head of the 21st Century Turkey Institute, an Ankara-based think tank, agrees. “This is a serious security gap. There is an audio surveillance here, which shows even the state’s sacred conversations are at risk,” he told Al-Monitor. “Separately, the content of these leaked recordings clearly shows this government is taking very risky steps in its Middle East policy. We are facing a government that may take very dangerous steps.”

A European source who requested not to be identified told Al-Monitor, “There are no red lines left in this country. Anything can be touched.”

As reported here March 26, Turkish authorities claim that the Tomb of Suleiman Shah in Syria — the only sovereign Turkish territory outside its borders — has been receiving security threats from radical groups since March 16. Those present at the leaked meeting discuss whether the tomb can be used as a pretext for waging war against Syria.

Davutoglu talks about the prime minister considering turning an attack on the tomb into an opportunity for carrying out a cross-border military operation. “Our national security has become too sleazy. It turned out to be a cheap domestic policy tool,” Sinirlioglu complains, hitting the opposition while arguing that the international community will rally behind Turkey in case of an attack on the tomb. Gen. Guler notes, “It will be a direct reason to declare war.”

Senior diplomat Sinirlioglu predicts that any operation against the Islamic State of Iraq and al-Sham (ISIS) will have international backing. He states that Turkey can frame it as an operation against al-Qaeda, which should not be a problem. As these high-level Turkish officials discuss how to implement this plot, intelligence chief Fidan states that they should be aware that their action would provoke attacks within Turkey.

Missing from this audio surveillance is what Turkey would gain from such an attack on Syria, potentially turning the Syrian regime and the radical groups against Turkey. Although Guler presumes that the radical groups will turn their fire against Turkey if they are not supplied with ammunition to sustain them for six months, there are still missing links as to why Turkey has taken all these risks to topple Syrian President Bashar al-Assad. The strategic calculation is missing in the leak.

In reaction to the leaked recordings, Davutoglu said Turkey has come under a “cyberattack” that is nothing but “a declaration of war against Turkey.” The Turkish Foreign Ministry also released a written statement arguing that the meeting took place so that officials could think out all sorts of security threats to the country. “It is the duty of the state's officials to discuss all sorts of plans to defend a part of the Turkish soil which is under the threat of some terror groups,” the statement read.

Despite questions regarding the origins of the recordings, and whether they are authentic, it is clear that radical groups have already started to target Turkey. On March 20, al-Qaeda-affiliated terrorists attacked a gendarmerie unit in Nigde, a Central Anatolian province, which left three dead and five injured. A March 25 police raid on an al-Qaeda cell in Istanbul left two policemen and two militants wounded.

While the Erdogan government has yet to condemn — not even once — the atrocities of the radical groups in Syria, these groups have already infiltrated Turkey's heartland, posing a direct threat to the country’s security.