ISIS emerges as threat to Turkey

Most Turks would prefer that Ankara step back from its current Syria policies and distance itself from any support for jihadist groups. 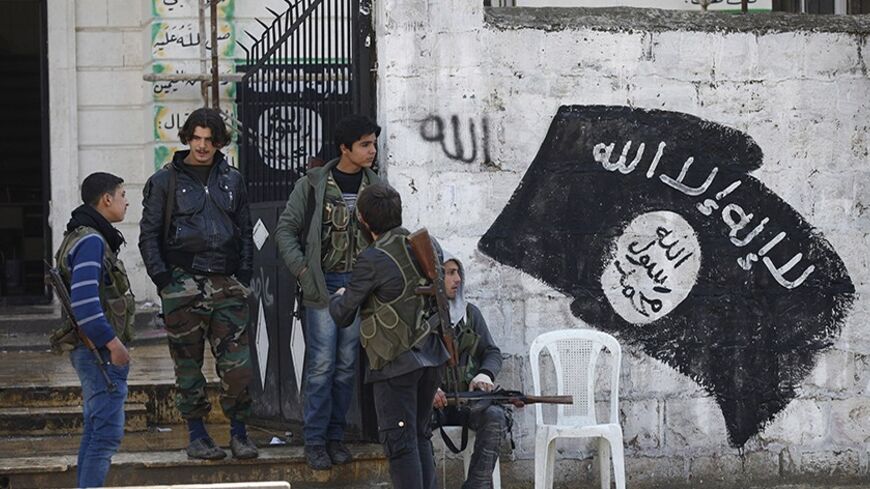 Free Syrian Army fighters stand at a former base used by fighters from the Islamic State in Iraq and al-Sham (ISIS), after ISIS withdrew from the town of Azaz, near the Syrian-Turkish border, March 11, 2014. - REUTERS/Hamid Khatib

Western governments have been worrying for some time now that jihadists in Syria, who traveled there from Europe to fight regime forces in the name of Islam rather than democracy, will be primed for terrorist attacks on targets in their countries of origin after they return home.

It appears, however, that rather than Western Europe, it is NATO member Turkey that militants from one of the most prominent of the al-Qaeda-affiliated jihadist groups fighting in Syria — namely, the Islamic State of Iraq and al-Sham (ISIS) — have chosen as their first European target.

Turkish security forces are worried now that the attack on March 20 in the Central Anatolian province of Nigde — by three ISIS members, according to government officials — in which a policeman, a non-commissioned gendarmerie officer and a truck driver were killed, and five soldiers were wounded, may be the start of further attacks in Turkey by ISIS.

Officials have named the three young assailants — who were subsequently caught — as Muhammed Zekjiri, said to be from Macedonia, Benjamin Xu, who is originally from Germany but said to be an Albanian citizen, and Cendrim Ramadani, a Swiss citizen who reportedly originates from Kosovo.

What makes the incident doubly worrying for security officials and ordinary citizens is that the three ISIS militants — who reportedly entered Turkey from Hatay province, which borders Syria — were said to be heading for Istanbul, Turkey’s financial capital and most densely populated metropolis.

Had their car not been stopped at the checkpoint in Nigde province, where they eventually staged their deadly attack with AK-47 assault rifles and hand grenades, the death toll could have been much higher and could have included a large number of innocent civilians, according to Interior Ministry sources.

Recent media reports — citing intelligence sources and claiming that an ISIS team comprising 20 militants had entered Turkey to carry out suicide attacks in Ankara and Istanbul as well as in Hatay province — have merely increased public concerns.

An incident this week, following the attack in Nigde, showed how tense the public is.

A young Libyan carrying a knapsack was wrestled to the ground by security guards as he hurriedly tried to enter the conservatory attached to Mimar Sinan University in the heart of Istanbul. It quickly became apparent that Ali Abdelsalam Rasem, 22, was not a suicide bomber but a student at the university.

The incident has nevertheless unnerved people of unmistakably Arab origin in Turkey, leaving them as the objects of public profiling and suspicions similar to what they already experience in Europe.

The Nigde incident also came at a time when ISIS has threatened to attack a tiny stretch of land in Syria that is a stone's throw from the Turkish border, where a small contingent of Turkish soldiers guard the Tomb of Suleiman Shah, the grandfather of Osman I, the first Ottoman sultan whose name the empire went on to carry.

The tomb, which is located in Aleppo governorate, is a curiosity piece that most Turks were unaware of until fighting in the region between the Free Syrian Army and regime forces and between rival jihadist groups ISIS and Jabhat al-Nusra flared up recently.

The tomb is the only strip of territory outside Turkey that actually belongs to Turkey. It was left on the Syrian side of the border at the end of World War I. Turkey gained jurisdiction over it following an agreement with France, the mandated power in Syria at the time, with the signing of the Lausanne Treaty in 1923, which established the internationally recognized Republic of Turkey.

A small contingent of 25 Turkish soldiers has been guarding the tomb ever since. The current site of the tomb is not the original resting place of Suleiman Shah. The original tomb was moved to its current location in 1973 in agreement with Damascus after Syria announced it would build the Euphrates' Tabqa Dam.

ISIS, which has been trying to gain influence in the whole region, threatened Turkey in a video uploaded on YouTube recently, saying it would attack the tomb if Ankara did not take the Turkish flag down and pull its soldiers out.

ISIS has proved to be a headache for Turkey since it first emerged and started fighting with Jabhat al-Nusra, a jihadist group that Ankara is accused of providing logistical support to as well as arms. Foreign Minister Ahmet Davutoglu claimed in January that ISIS was not fighting the Bashar al-Assad regime but collaborating with it.

“ISIS emerged on the scene and started fighting opposition forces, just when the opposition in northern Syria grew strong. There is a partnership behind the curtain between them and the regime,” Davutoglu claimed during an interview with Anadolu Agency on Jan. 9.

The enmity ISIS feels toward Turkey was discernible in the remarks of Ramadani, one of the assailants in the Nigde attack, who was quoted by the press on March 25 as expressing happiness over having killed a Turkish gendarme.

“I refuse to answer your questions. I will only account to Allah. You are all pagans. I did a good deed by killing the gendarme,” Ramadani reportedly told the interrogating prosecutor. Ramadani was also quoted as saying he considered Turkey to be an enemy country because of its NATO membership.

The Turkish military is already on high alert along the border with Syria after the downing of a Syrian fighter jet belonging to the regime on March 23 for violating Turkish airspace; a crack team of commandos is said to be ready to respond instantly, with air cover, should ISIS carry out its threat to attack the Tomb of Suleiman Shah.

Defense Minister Ismet Yilmaz told reporters on March 15 that Turkey would protect the tomb just as it would any Turkish land against any attacker, and that all the necessary precautions had been taken.

“It is not possible for anyone who does not desire Turkey’s enmity to look there with ill intent. As for those who want Turkey as an enemy, they will not be given the right to live in this area,” Yilmaz said. He added that he did not expect an attack on the tomb for this reason.

Reassuring as these tough remarks may be, there is growing concern among ordinary Turks — especially after the Nigde attack — of an embroilment with ISIS and other al-Qaeda affiliates. Memories of the deadly truck bomb attacks in Istanbul in November 2003 by an al-Qaeda cell that left 57 dead and 700 wounded still linger.

Turks have also not forgotten the twin car bombing in Reyhanli, a town in Hatay province, in May 2013 that left at least 51 dead and 140 injured. Pro-Assad elements in Turkey were accused and charged over that incident, but many Turks saw the attack as the result of the Erdogan government’s Syria policy, which in hindsight is considered largely to have been based on a series of gross miscalculations.

Turks are also not happy over claims that Ankara is continuing to provide logistical support and weapons to jihadist groups — such as Jabhat al-Nusra — which have also claimed allegiance to al-Qaeda. The claim is that Turkey is supporting these groups on the grounds that they are effective against Syrian regime forces.

Ankara denies that it is proving such help, but the accusation has refused to go away.

Most Turks feel there are no friendly jihadist groups, only dangerous ones that will eventually turn against a secular Turkey — a NATO country that aspires to be a member of the European Union one day.

Most Turks would therefore like to see the government openly and categorically distancing itself from all radical groups in Syria. Growing tensions with ISIS only serve as a reminder of why this is important.