Syria back on Turkey's agenda

The Syria issue is suddenly back on Turkey’s agenda after attacks by armed individuals coming from Syria. 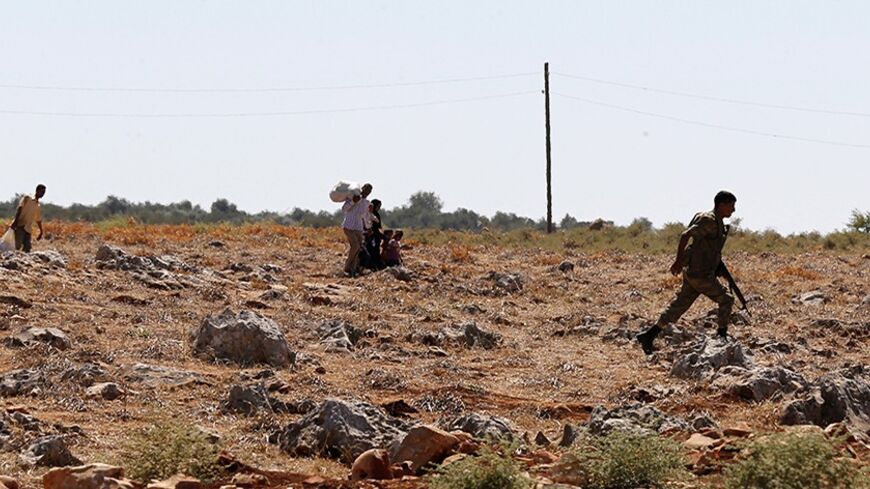 Just what Turkey needed: As the country was already in the throes of pre-election turbulence, plus corruption scandals and leaks of secret phone conversations, the Syrian boomerang came back. The warning by Kemal Kilicdaroglu, the leader of main opposition Republican People’s Party (CHP), that Turkey could easily send its army inside Syria to defend the Sovereign Turkish Enclave of Jabar Fortress and the Tomb of Suleiman Shah, guarded by a small Turkish military detachment, was enough to bring the issue of a cross border operation on the agenda. This comes in addition to comments by Minister of Energy Taner Yildiz that in case of an attack against the tomb, Turkey could respond with “a specific point attack.” But a more serious development took place at Nigde, southeast of Ankara.

On March 20, while security forces were conducting routine checks on the Ulukisla-Adana expressway, three foreigners emerging from a taxi opened fire with an AK-47 (some reports say Glock automatics) and lobbed a hand grenade, killing a soldier and a policeman, and wounding five soldiers. The attackers were wounded in return fire, but got away in a van they commandeered for their escape. Two of the attackers who spoke Arabic and English were apprehended at Eminlik village, where villagers, thinking they were wounded Syrians, took them to the local medical clinic. The two were then transferred to a hospital at Nigde where local people protested vehemently, necessitating their transfer to Ankara. The third attacker was caught at Ulukisla village of Pozanti township. After performing his morning prayers at the local mosque, he went to shop for food and paid with a $50 bill. He was returning to the mosque when he was caught by security forces tipped off by villagers.

Minister of Interior Efkan Ala said two of the attackers were born in Albania and one in Kosovo. They spoke in Arabic. Local news reports said the Albanians were 18 years old and the Kosovan, 23. They had three AK-47s, three pistols, seven hand grenades, two silencers, three bayonets and radios.

According to Dogan News Agency, Kosovan police officials confirmed that the attackers are linked to al-Qaeda and three have been wanted by police because of previous crimes in Albania and Kosovo. Kosovan security officials said they have obtained information that the attackers had joined al-Qaeda in Syria along with about 100 other Kosovars.

Responding to a question on whether the attackers were related to groups inside Syria, Ala said, “We are investigating their links, but with no doubt they are linked to one of the groups there.”

As their objective or group affiliation inside Syria is not yet clear, most reporting on the incident is speculation. Turkish media prefer the scenario that the attackers are militants from the Islamic State of Iraq and al-Sham (ISIS). The attackers came from the ISIS-controlled Atme region, entered Turkey via Hatay and hired a taxi for 2,500 Turkish lira ($1,300).

Ala, in his interview for TV 24, claimed that the attackers had planned to go to Istanbul, and their aim was to create chaos ahead of elections. Daily Hurriyet speculated they were on their way to Istanbul to create chaos at March 21 Nowruz celebrations, or at election rallies. The newspaper referred to a Feb. 23 gendarmerie intelligence report that ISIS might be planning operations in Turkey.

A terror summit was convened in Ankara, which might indicate the seriousness of the attack.

Even before the investigation was complete, the political opposition asserted that the government’s misguided policies in Syria were now backfiring. The government took refuge in conspiracies pointing to the intentions of Bashar al-Assad’s regime to create chaos. Deputy Prime Minister Besir Atalay, after accusing Syria, said, “This is a terror act designed to poison the election atmosphere.” But he did not say where he learned that. Minister of Culture and Tourism Omer Celik, speaking at a ceremony in Adana honoring dead soldiers and policemen, preferred the classic rhetoric, stating, "This is an attack coming from beyond our borders. It is an effort to threaten our democracy, social peace and stability." The chairman of the opposition Grand Unity Party, Mustafa Destici, said, "It was a strong probability that the chaos and civil war in Syria will spill into Turkey because of the wrong policies followed by the government."

Military and security intelligence earlier reported that al-Qaeda could stage attacks in Turkey and security forces were put on alert. In addition to possible attacks in the country, stepped-up military activities along the border pose serious threats to Turkey. The border town of Yayladagi in Hatay has been on alert for the past several days because of attacks launched by Jabhat al-Nusra, Sham, al-Islam and Ansar al-Sham, all linked to al-Qaeda, against the town of Kasab, where Alevis and Armenians live. Turkish forces in the region have been put on alert, and border security has been beefed up. Many people fear that the border area is going to heat up with attacks on the eve of coming elections.

ISIS, in a March 16 video message, threatened Turkey: "If Turkish soldiers do not withdraw from Suleiman Shah Tomb in three days, we will destroy the tomb."

The opposition, when considering frequent reactions of cabinet members on the attack in Nigde, the dangerous situation of the Hatay border area and menace of ISIS, claimed that this is a useless effort to change the agenda from corruption and scandals.

Editor's Note 3/23: This article has been updated with further information about the attackers' links to al-Qaeda.