Turkish Foreign Minister Ahmet Davutoglu says those who consider Turkey’s downing of a Syrian jet an election ploy are "evil-minded." 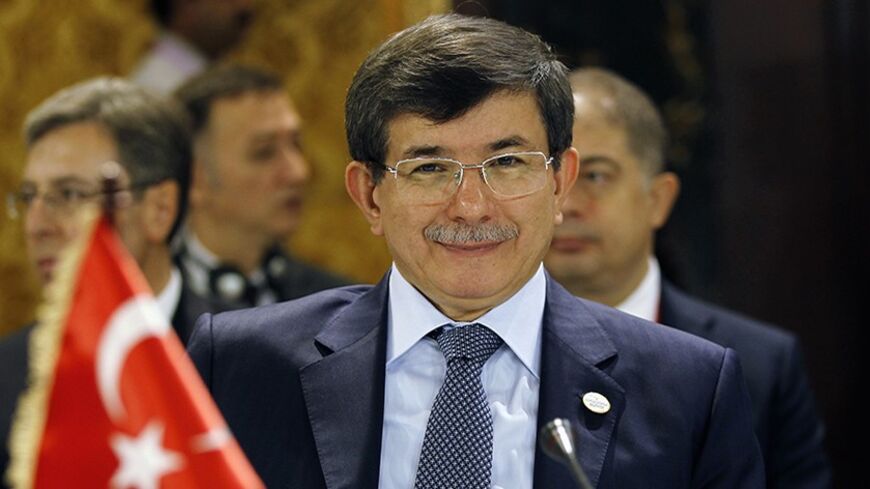 These two incidents show just how dark the situation has become along the Turkey-Syria border. Since March 16, Turkish government authorities have expressed concern that the Islamic State of Iraq and al-Sham (ISIS) threatens to lower Turkey's flag at the Tomb of Suleiman Shah in Syria — the only sovereign Turkish territory outside its borders. They say the Turkish military is fully authorized to defend the tomb. Then, Turkey shot down a Syrian fighter jet on March 23, claiming it violated Turkish airspace.

While Turkish political commentators raised doubts over whether there is any link between these two events and the local elections on March 30, Turkish Foreign Minister Ahmet Davutoglu said on March 25 that the event cannot be seen as an "election maneuver." Davutoglu blamed the media for "being a spokesperson for [Syrian President Bashar al-] Assad's regime," calling them "evil-minded."

Davutoglu could be using these fear-mongering tactics to rally people behind his Syria policy. A December 2013 public opinion poll conducted by Kadir Has University found that almost 50% of the Turkish people believe Turkey’s Syria policy has been a failure. If this figure is applied to the constituency of the ruling Justice and Development Party (AKP), it may also show that the country is direly divided along political leanings, even on key foreign policy issues that could drag the country into conflict. Furthermore, Davutoglu’s description of all those dissenting as “evil-minded” is no different than Turkish Prime Minister Recep Tayyip Erdogan accusing people who have different views on Syria of "treason."

This kind of overblown and unsubstantiated narrative unfortunately kills the opportunity to rethink the country’s Syria policy. Meanwhile, the AKP government fails to admit its failed policy to topple the Assad regime.

There certainly is an ambiguity surrounding the Turkish government’s decision to shoot down the Syrian jet fighter. “It looks like Turkey has deliberately brought down that [MiG-23],” a NATO source, who did not want to be named due to the sensitivity of the issue, told Al-Monitor. “We doubt that there was any threat to Turkey. It looks like Turkey took down this Syrian jet to help the radical groups.”

The Syrian MiG-23 was shot down near the Syrian border town of Kassab when it violated Turkish airspace by 1 kilometer (0.6 miles). “It is highly likely that those radical Islamic groups, like Jabhat al-Nusra and others, entered Syria through Turkey to take control of Kassab, very close to the Turkish border,” Yasin Atlioglu, an assistant professor at Nigde University who specializes in Syrian affairs, told Al-Monitor. “The Syrian army and the local militia fired back at these radical groups. The Syrian regime and Armenian publications directly blamed Turkey for these radical groups’ attack on Kassab. While Turkey may become the target of the Islamic State of Iraq and al-Sham (ISIS), it is also, on the other hand, helping facilitate the attacks of these radical groups at the border.”

On March 25, the Armenian Bar Association sent a letter to US President Barack Obama urging him to take concrete steps for the safety of the Armenian people in Syria. “The fate of Armenians and other Christians in Syria should never be deemed or accepted as collateral damage of the rebels, who have and continue to receive the support of our government," they wrote. "The incursion from Turkey into the town and villages of Kassab in Syria, and the ensuing carnage, the reported killings and the taking of Armenians as hostages, should be met with your condemnation and strategic plan of recovery, restitution and return."

There certainly is a real debate outside Turkey’s borders about its Syria policy. “Turkey has done [its] best to encourage this chaotic situation,” one European source, who asked not to be identified, told Al-Monitor. “Turkey picked up the strategy of helping these radicals [because they considered it a helpful tool to bring about Assad’s end.] This cannot be reversed now. It’s been a stupid move by the Turkish side, as that prevented the United States from acting in Syria.”

The same European source added, “The United States was clear on Jabhat al-Nusra from the beginning; it labeled it as a terrorist group from early on. That, however, did not prevent the Turkish side from doing what they’re doing. The bombing of the Syrian [MiG-23] was for helping these radicals.”

NATO sources told Al-Monitor that, in an unofficial setting, NATO member countries expressed concern over the Turkish action at the Turkey-Syria border to Fatih Ceylan, Turkey’s permanent representative to NATO ambassador. “In next week’s NATO foreign ministers meeting [April 1-2] …, I assume that people will directly share their concern with Minister Davutoglu over Turkish behavior. They will probably give the message that they do not want to be dragged into the Syrian quagmire while the Ukraine issue is keeping them busy at this stage,” a NATO source told Al-Monitor. “Unless Turkey brings this issue to the agenda, these issues will not be discussed in an official setting.”

European sources told Al-Monitor that when Turkey called NATO for an emergency session in October 2012, after a cross-border incident with Syrian mortar fire left five dead in the Turkish border village of Akcakale, Turkey briefed NATO member countries about the Tomb of Suleiman Shah. Turkish authorities said that beginning March 16, the tomb has received threats from ISIS. Turkish media reports even claim that special forces are positioned at the border in case of an attack on the tomb.

A YouTube clip, uploaded on March 21, shows four men in front of the ISIS flag giving Turkey three days to lower its flag at the tomb, or else they will raze it. “We don’t know who these people are, exactly,” the European source told Al-Monitor. “All I can tell is that Turkey does not need to brief us each time about the Suleiman Shah Tomb. They did it in October 2012. But if there is a direct threat, they should tell NATO members. In the absence of it, we really do not believe that this threat is a serious one.” This supposed deadline extended by ISIS ended on March 24, and the tomb has not been attacked.

NATO has deployed Patriot missiles to Turkey to help strengthen its security in case of a potential Syrian attack on its territory. NATO sources say that Turkey is acting as if it does not appreciate the support. It is, however, clear that NATO and EU member countries are doubtful of Turkey’s Syria approach, and they don’t find Turkey innocent with regard to allowing these radical groups to exploit its borders and turn the situation in Syria to carnage.