Turkey shoots down Syrian plane as elections heat up 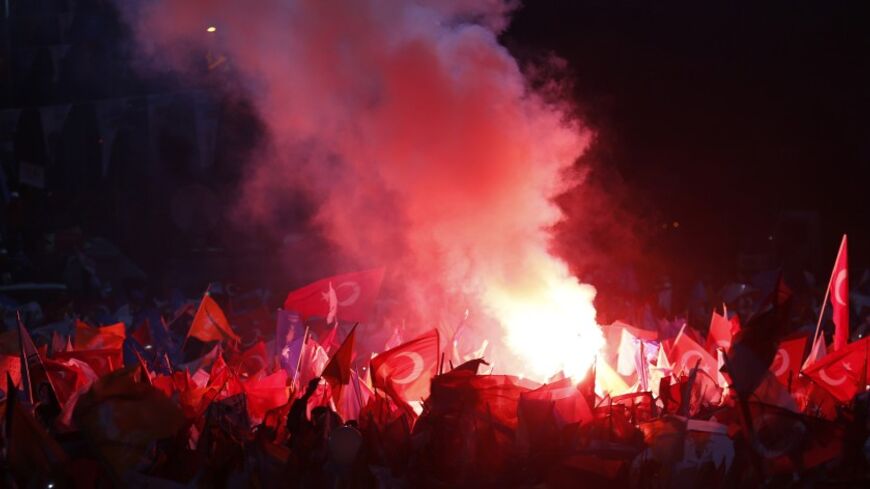 Supporters of Turkey's Prime Minister Recep Tayyip Erdogan light flares during an election rally in Istanbul, March 23, 2014. Erdogan on Sunday touted his country's shooting down of a Syrian MiG-23 earlier in the day. - REUTERS/Murad Sezer

As Turkey was shuddering from scandals involving corruption, wiretaps and the closing down of Twitter as it neared the March 30 local elections, the Syria crisis came as a lifesaver to Prime Minister Recep Tayyip Erdogan. As the threat that al-Qaeda was going to attack the sovereign Turkish enclave of the Tomb of Suleiman Shah inside Syria turned out to be a non-event albeit one that kept Turkey’s agenda busy for a few days, the real bomb came with the shooting down of a Syrian warplane that was attacking opposition fighters trying to capture the Syrian town of Kassab on the Turkish border. With the shooting down of the plane, the election rallies of the governing party immediately assumed the atmosphere of “our victorious prime minister.”

Turkey — by shooting down the Syrian plane in Turkish airspace over the town of Yayladagi in Hatay province — has now inflicted a second revenge against the shooting down of a Turkish RF-4E Phantom with its two pilots over the Mediterranean near the Syrian border in 2012. On Sept. 16, 2013, Turkey had shot down a Syrian M-17 helicopter over Yayladagi with F-16 fire.

One plane left the scene but the other resisted

According to a statement by Turkey’s Chief of General Staff, two Syrian MiG-23 planes were detected at 1:01 p.m. local time by the Diyarbakir Air Control Center when they were 80 nautical miles away. The planes were warned four times when they were within 10 miles of Turkish airspace. After the warnings, one of the planes disengaged and left the area without entering Turkish airspace but the other, around 1:13 p.m., violated the Turkish airspace for about 1 kilometer (0.6 miles) in the area of the Camli Tepe border post. The plane then turned west and flew about 1.5 kilometers (nearly a mile) in Turkish airspace. At 1:14 p.m., a Turkish F-16 that was on patrol in the region hit the Syrian plane with a missile as per rules of engagement. The plane that was hit crashed in Syrian territory about 1,200 meters (nearly 4,000 feet) from the border in the region of Kassab.

According to official Syrian news agency SANA, "The pilot of the plane that was shot down while chasing terrorists safely ejected by parachute."

The Syrian Foreign Ministry accused the Turkish government of “an unprecedented hostile attack without any valid reason against Syrian sovereignty and territory.” It also accused Turkey of opening artillery and tank fire against Syrian territory to facilitate the crossing of armed terror gangs from Turkey to Syria. The statement said, “This is nothing but a declaration of failure and bankruptcy by Erdogan, who is mired in corruption and is not wanted by his people. The Syrian government calls on [the] Erdogan government to put an end to its aggressions and abide by international law.”

The shooting down of the plane came hours after the al-Qaeda-linked Jabhat al-Nusra and the Islamic Front jointly captured Kassab, where Alevis and Armenians live. Many fighters wounded in three days of clashes were evacuated to Turkey.

As the clashes continued, Syria’s permanent representative to the UN, Bashar Jaafari, sent a complaint to the Security Council that said, “Some regional states and other foreign powers are insisting on supporting terrorism. On Friday, fire was directed at the Kassab area from the border of Turkey when the militants who crossed the border were repulsed by units of the Syrian Arab Army. The Turkish army gave logistical and military support to the attacking groups.”

On the morning of March 23, the militants who captured the Kassab border crossing post jubilantly celebrated their victory. Turkey’s defense minister, Ismet Yilmaz, said people were evacuated from some Turkish villages along the border.

“A thief cannot be a hero”

Erdogan, who was accused by nationalist quarters for not doing enough after the shooting down of the Turkish plane in 2012, on March 23 displayed pride in having taken revenge this time. In several election rallies, Erdogan loudly boasted of the shoot down and served notice to Syria. In his Kocaeli rally he showed his intent to use the shooting down of the plane as campaign material when he said, “Another assassin [the Syrian plane] violated our airspace. Our F-16s took off and hit it. Why? If you continue to violate our airspace, our slap will be harder next time. Led by our chief of the General Staff, I congratulate our honorable pilots and air force. This is all there is to it.”

Kemal Kilicdaroglu, chairman of the main opposition Republican People’s Party (CHP), said the matter is being exploited in election rallies, adding, "We will never criticize the action taken when the rules of engagement are violated, but we also don’t want the boast of ‘I am a hero.’ A thief cannot be a hero.”

Clashes in the Kassab area were observed with concern from Hatay. The Alevi massacre by armed groups in August 2012 at Latakia deeply shook the Alevis of Hatay.

Although the shooting of the plane may appeal to nationalist sentiments, with the deep rifts in Turkish society caused by the Syrian crisis, Erdogan may not have the power he may want.

Moreover, even Erdogan’s own constituency widely shares the anxiety that military reprisals may well drag Turkey into the swamp.