Was shoot down of Syrian plane linked to Turkish elections?

Is it possible to disentangle the shooting down of a Syrian plane on March 23 from the Turkish local elections on March 30? 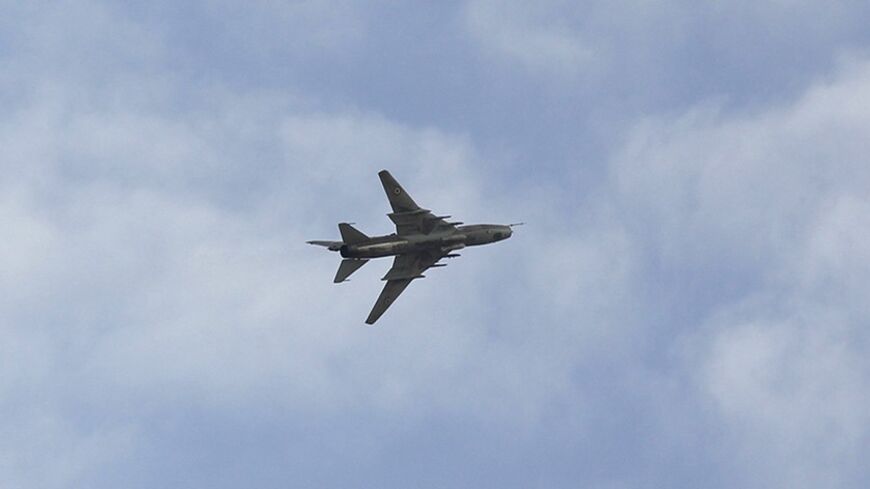 A Syrian air force fighter plane flies over the Syrian town of Ras al-Ain during an airstrike, as seen from the Turkish border town of Ceylanpinar, Sanliurfa province, Nov. 13, 2012. - REUTERS/Osman Orsal

If I had begun this article by saying, "The shooting down of a Syrian MiG-23 warplane that allegedly violated Turkish airspace at 1:14 p,m. March 23, with a missile fired from a Turkish F-16 has suddenly shifted the attention of Turkish public opinion to the Syria border,” it would have been an incomplete lead.

The first sentence of any news analysis about the Syrian plane shot down March 23 cannot be complete unless it notes that the plane was shot down one week before the March 30 local elections.

On March 24, as this article was being written, Ankara authorities had not yet released sufficient or persuasive information to the public that the Syrian plane was posing a direct and critical security threat that needed to be eliminated.

The Turkish chief of the general staff, in a statement issued at 4 p.m. March 23, said the Syrian plane violated Turkish airspace by about one kilometer (six-tenths of a mile) at 1:12 p.m. local time in the area of the Camli border outpost in the Hatay/Yayladagi area, then turned west and flew about 1.5 kilometers (close to a mile) in Turkish airspace.

Even if we assume that this warplane was flying slower than its usual speed, its violation of Turkish airspace can only be expressed in seconds.

Turkey’s shooting down of a military plane of a country such as Syria — a country we are not at war with — and its timing cannot be explained only in technical terms. The decision to shoot down the Syrian plane was a political one. Therefore, we have to consider the entirety of the incident from a fully political angle.

Our officials have not come out with an adequate explanation about why the Syrian plane was such a grave threat that required its shooting down immediately instead of being chased beyond the border by Turkish air elements as a part of their interception mission.

Examining the event from a political perspective requires making a connection between Turkey’s political calendar and the timing of this incident. As the March 30 local elections approach, Prime Minister Recep Tayyip Erdogan’s government is under heavy pressure because of the potential loss of votes that could entail a significant political cost when combined with the abrasive effects of the Justice and Development Party's (AKP) war with the Gulen movement, widespread corruption and bribery accusations and an economic slowdown.

Erdogan must feel he is under tremendous pressure. On March 20, within a couple of hours after he announced that he would ban Twitter — the main social media platform through which accusations against him are transmitted — officials, on his orders, stopped access to Twitter from Turkey.

If Erdogan had foreseen the grave loss of prestige and legitimacy this unfortunate step would accrue to him, he wouldn’t have said “the reaction of the world doesn’t concern” him when he made his declaration of war against Twitter.

One has to be naive to think that a leader with an authoritarian streak, feeling cornered to the extent of banning Twitter, would not be looking for selfish adventures beyond our borders to alter the national agenda and to stem the loss of blood from his nationalist and Sunni conservative constituencies and thereby recover lost votes.

It was no wonder then that Erdogan, without missing a beat, used the shooting down of the Syrian plane at his political rallies. On March 23, a few hours after the plane incident, while addressing his party’s rally at Kocaeli, he said, "Today at 12:15, again an assassin took off, this Syrian plane, and violated our border, airspace. Our F-16s took off and hit this plane. Why? If you violate our airspace our next slap will be harder. That is all there is to it.” (Assassin also is a label Erdogan has affixed to the Gulen movement, inspired from an Islamic cult from the 11th century renowned for its volunteer assassins.)

The front page headline of the pro-government daily Sabah about the incident was “Our two martyrs are now resting in peace.” The subhead was: “The revenge for the killing of our two pilots two years ago has been taken.” In 2012, when a Turkish RF-4 reconnaissance plane was flying over the Mediterranean, it was hit with a missile fired from Syria, and crashed in Syrian territorial waters. Both pilots were killed. Turkey claimed that the RF-4 was in international airspace when it was hit, while Syria said the plane was shot down in Syrian airspace.

Another tension point with Syria that found a place on the national agenda is the threat issued by al-Qaeda-affiliated Islamic State of Iraq and al-Sham (ISIS) against the Tomb of Suleiman Shah that is legally accepted as a sovereign Turkish territorial enclave near Karakozak village in Aleppo, about 40 kilometers (25 miles) from the Turkish border. It is the tomb of Suleiman Shah, the grandfather of Osman Ghazi, the founder of the Ottoman Empire. In normal times, this tomb on a plot of about 10 acres is guarded by 25 Turkish soldiers. ISIS, which has gained the upper hand in the area, has been reported as demanding that Turkey withdraw its soldiers, and as issuing ultimatums that it will attack unless Turkey complies.

According to the latest reports, Turkey is amassing armored units on the border.

If there is an attack against the tomb, Turkey will have to respond. But as the local elections approach, what Ankara has to do is not to wait for this attack to happen, but to take the requisite deterrent measures to prevent it from happening.

Another point that must not be ignored is that the AKP government and its media, until yesterday, had been portraying ISIS as a force supported by the Damascus regime behind the scenes to gain legitimacy for its own existence and to present the regime as the best option available to the world.

If this is true, obviously Turkey has to be exceptionally alert to any provocation so as not to be dragged into the Syrian morass.

Media agitation advocating intervention cannot be any more than pure election propaganda. Any military step without sufficient explanation for its necessity as the elections approach will no doubt be perceived as a foreign venture entered into to minimize the loss on March 30.

As a result, those who govern Turkey have to keep in mind that they don't have the support of their own base for their Syria policies and that the vast majority in Turkey is against intervening in Syria.

All these developments lead to suspicions that AKP rule is involved in crisis engineering involving Syria to minimize the loss of votes in the elections.