Another Syrian nightmare, courtesy of the Russians 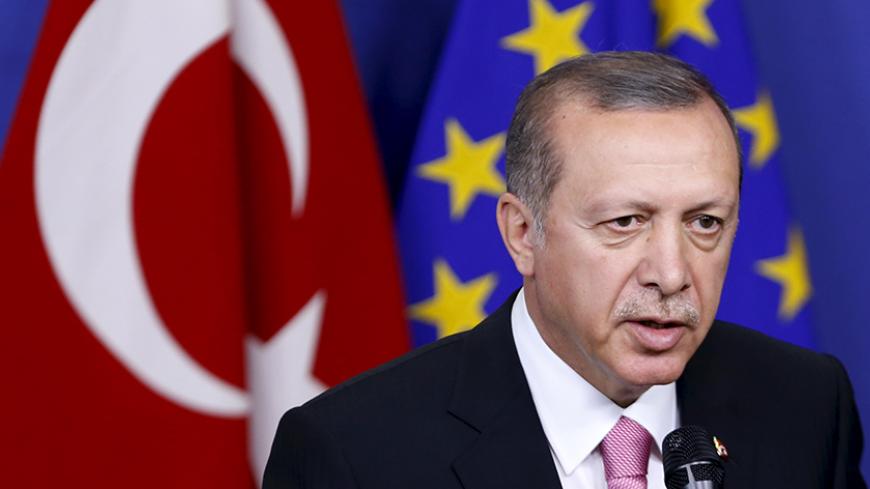 Turkey's President Recep Tayyip Erdogan talks to the media before a meeting that discussed Russia's violation of Turkish airspace near Syria, at the EU Commission headquarters in Brussels, Oct. 5, 2015. - REUTERS/Francois Lenoir

Turkey is now having to cope with multifaceted ramifications of Russia’s intervention in Syria. What has made Ankara nervous is not only the failure of the government’s Syria policy, but the collapse of plans for a safe zone to house Syrian refugees and withering away of the idea to support opposition forces with Turkey’s rules of engagement. Now Turkey has to deal with new tensions created by the fleeing of armed Syrian militants from Russian bombings to Turkey.

Before going into implications of the Russian violations, it will help to take a look at the situation along the border that has been off the Turkish agenda for a while.

It is a fact that northern Syria acquires its logistics and manpower through Turkey. In earlier days, militants escaping from the Syrian army into refugee camps near the border had caused fatalities. Now the Russian air force is on the scene and the escape routes are once again active.

According to what Al-Monitor learned from local sources in Hatay on Oct. 5, 15 militants in full gear entered Turkey at the Turfanda village on the Syria-Turkey border and moved toward Antakya. Residents notified the gendarmerie but the men eventually disappeared in the company of soldiers.

On Oct. 3 at 11 p.m., a bus that entered Turkey from Yayladagi was forced to stop after crashing into a car at Hatay’s Harbiye district. The bus with nonmatching back and front license plates and passengers inside attracted attention. When the passengers left the bus with their belongings and began to disperse through the side streets, rumors spread that jihadists had reached Harbiye. Subsequently, the police took the passengers to a nearby school building, until police reinforcement arrived and the passengers were taken away. Nobody really knew who they were.

As Russia intensifies pressure on the Aleppo, Idlib and Raqqa areas, this kind of militant movement is inevitable. Hatay has always been a city that has been fervently opposed to Ankara’s Syria policy that backs jihadist groups.

Representatives of armed groups last week rushed to Istanbul to discuss how to respond to Russia's intervention. Ahrar al-Sham, Jaysh al-Islam, Suqour al-Sham, Jaish al-Mujahideen and Sultan Murat Brigade attended the two-day meeting that concluded with a call from 41 organizations fighting the Bashar al-Assad regime to regional countries to unite against the Russia-Iran alliance.

As to Russian violations of Turkish airspace, what cannot escape notice is how Turkey’s rules of engagement against the Syrian military operating near the Turkish border were invalidated by airspace violations of Russian jets.

On Oct. 3, a Russian Su-30 loaded with bombs violated the Turkish border south of Hatay-Yayladagi for two minutes, and Turkish warplanes scrambled to intercept. The violation was repeated the next day. Russia not only violated the airspace but also harassed the Turkish interceptors; according to a statement by the Turkish High Command, on Oct. 4, a MiG-29 jet locked its radar for five minutes and 40 seconds on two Turkish F-16s patrolling along the border.

Russia’s Ankara-based Ambassador Andrey Karlov was summoned to the Foreign Ministry, and Foreign Minister Feridun Sinirlioglu called his Russian counterpart Sergey Lavrov to convey Turkey’s reaction. Turkey also engaged its NATO allies, and warnings issued to Russia multiplied. The Turkish government had concealed the developments until a TV broadcast on Oct. 5 informed the public of the recent events.

Has Russia changed the rules of the game, despite saying that its actions are not intentional? If so, how?

Prime Minister Ahmet Davutoglu took a tough line after the incident. “Turkey’s rules of engagement are valid for Syria, Russia or any other country. Turkish armed forces have clear instructions. Even if it is a bird, whatever violates Turkey’s borders, it will be confronted,” he said, without really impressing anyone.

The Turkish public is inured to Davutoglu’s blustering statements of the sort that “nobody should try to test our power,” which have no bearing on the events.

Although Ankara wants to make the issue again a NATO crisis, reactions by the alliance are far from meeting Ankara’s expectations. In short, Russia tested the limits of Turkey’s rules of engagement that also apply to NATO. The Western alliance that found it adequate to apply its Article 4, calling for consultations instead of Article 5 that calls for action when a Turkish jet is downed — which didn’t react to the annexation of the Crimean Peninsula and that couldn’t take any deterrent position vis-a-vis the events in eastern Ukraine — will find it hard to do anything more than issuing warnings.

Despite such warnings, Russians staged their third harassment action on Oct. 5. According to information provided by the chief of General Staff on Oct. 5, while eight Turkish F-16s were on air patrol along the border, they were harassed by a MiG-29 that locked its radar on them for 4½ minutes. At the same time, Syria-based surface-to-air missiles locked their radars on Turkish planes for four minutes and 15 seconds.

This could well mean that Russia has established a de facto no-fly zone near the border. Has Turkey not tried so hard to declare a no-fly zone against the Syrian regime in this area?

It has now become clearer how Russia has changed the rules of the game since Oct. 5, right after President Recep Tayyip Erdogan warned, “What has been done to Turkey, has been done to NATO. Our relations with Russia are there to see, but they will lose.”

These are signs that Russia is willing to take on all challenges and that it is ready to cope with whatever may happen.