Russian air superiority in Syria has destroyed Ankara's hopes for a safe zone in the north and "Syria without Assad." 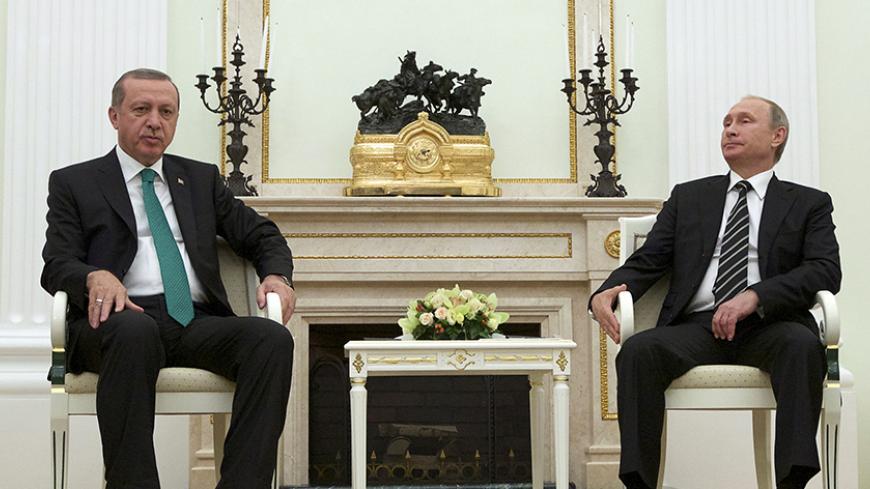 Russia's military deployment and air operations in Syria surprised many leaders, none more so than those in Turkey, when it became obvious that the onslaught would not be aimed against the Islamic State. Turkish President Recep Tayyip Erdogan — following a visit to Moscow on Sept. 23 and a subsequent statement that he was prepared to closely cooperate with Russia in every field — should not have been so surprised. It is apparent, however, that the perception of decision-makers in Ankara varied greatly from the realities on the ground.

What has Ankara lost with the Russian intervention? Moscow, with the kiss of life it has given the Bashar al-Assad regime, put an end to Turkey’s hope of “Syria without Assad.” It also reinforced the idea that the armed groups considered the “moderate opposition” in Syria — groups supported by Turkey — are actually terrorist organizations. The air superiority Russia has imposed over western and southern Syria dashed Ankara's hopes for a no-fly zone over northern Syria. According to Arda Mevlutoglu, an independent security analyst, Russia's moves also ended the debate about establishing a safe zone in northern Syria.

Mevlutoglu told Al-Monitor, “To set up such zones, above all, requires air superiority. Any move toward such zones will henceforth run the risk of confrontation with Russian planes and a possible clash.” He stressed that Russia's actions have seriously rankled NATO and noted that any active or passive measures NATO might adopt in Syria could carry the risk of directly confronting the Russian military. Without a doubt, this situation will only add to discord within NATO over Syria.

Russia’s increasing visibility in Syrian air space means the Turkish military, especially the air force, already struggling against the Kurdistan Workers Party (PKK) in Turkey and northern Iraq, will be under heavy pressure on the Turkey-Syria border, and many more sleepless nights await the high command in Ankara. Adding to the already-tense situation are Turkey's claim that a Russian Su-30 violated Turkish airspace in the Hatay region Oct. 3 and reports that a Russian or Syrian MiG-29 had locked its radar on Turkish F-16s on an interception mission.

The Turkish losses accruing from Russia's intervention are not limited to Ankara’s Syria policy. A senior security official in Ankara who requested anonymity said Turkey’s strategy of influencing Russia with economic enticements of mega projects, such as the $1.4 billion Akkuyu nuclear power station, has lost out to realpolitik. Erdogan and Prime Minister Ahmet Davutoglu have thus learned the bitter lesson that balances in the region are not determined by economic interdependence.

Russia’s intervention also points to tough times for Turkey’s navy. Naval security analyst Devrim Yaylali spoke to Al-Monitor about the significance of Russian naval assets in the eastern Mediterranean, pointing out several factors that cannot be ignored. First, the hydrocarbon reserves in the eastern Mediterranean could reduce Turkey’s external dependence on energy. Second, the area east of Cyprus and the region to the west of Hatay and Syria constitute one of the few navigational routes Turkey can use to reach open seas without potential interference from another country. Third, a major segment of Turkey’s energy imports and exports are transported via the Gulf of Iskenderun, which, until now, the Turkish navy appeared to be keeping calm.

Turkey's navy has also been protecting Turkish seismic exploration vessels and intercepting foreign seismic research vessels entering exclusive economic zones belonging to Turkey and northern Cyprus. Yaylali asserted, “The ongoing contacts between Greek Cyprus, Israel and Egypt to share the sea’s hydrocarbon reserves will be even more complex with the arrival of Russian warships in the region. It is likely that Russia, by offering military and political backing to Greece, Greek Cyprus and Egypt, will try to dominate the navigational routes of the eastern Mediterranean. This in turn will [make] Turkey’s access to open seas more difficult.”

For the ruling Justice and Development Party (AKP), the Russian intervention in Syria represents a loss in domestic politics. Perhaps for the first time, the AKP elites cannot resort to their habit of using foreign policy as a tool in domestic politics. The losses to Turkey’s Syria policy can no longer be covered over with mere rhetoric.

At the moment, Ankara’s decision-makers and security bureaucracy are trying to figure out what Russia's escalating aerial maneuvers mean, how long they might last and whether they signal a possible ground intervention. Another answer they seek is whether the Russian intrusion into Turkish airspace was a technical mishap or a test of Turkey’s response. A question being asked by others is whether Ankara will treat further airspace violations as a national issue or try to make it a NATO affair.

For the time being, the crisis seems to have eased with Russia's explanation of the Oct. 3 violation as a “technical mistake related to navigation” and a statement by Russian presidential spokesman Dimitri Peshkov that the “operations in Syria will not cause deterioration in relations with Turkey” because of the strong basis of cooperation between the two countries. Ankara nonetheless remains worried. Why? Because like many other Western capitals, it wonders whether Syria is Russia’s new arena to test its Gerasimov doctrine — expanding influence by creating microrealities in the field for unspecified periods with a blend of kinetic and soft techniques and adhering to international legal norms as much as possible.