Turkey is promoting deals with Ukraine to bypass Western embargoes in the defense industry and share critical military technologies. 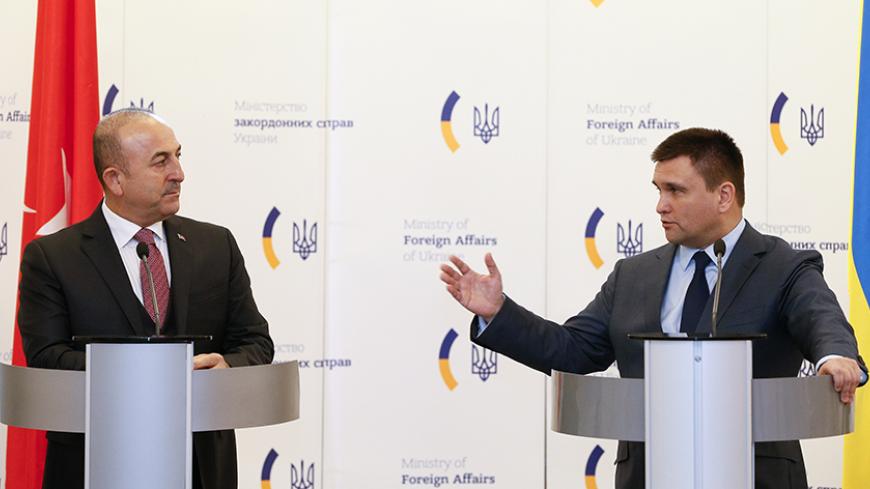 It looks like Ukraine is becoming Turkey's new go-to defense technology partner. Strategic ties between Turkey and Ukraine in the fields of defense and military cooperation are flourishing. The latest development was the April 19-22 visit to Turkey of the commander of the Ukrainian navy, Vice Adm. Ihor Voronchenko, and his delegation.

Voronchenko visited Golcuk shipyards, where Turkey built the Ada-class SW corvettes TCG (Turkiye Cumhuriyeti Gemisi, or "Ship of the Turkish Republic") Heybeliada, Buyukada and Burgazada and delivered them to the Turkish navy in 2011 and 2013; the TCG Kinaliada is under construction there. Turkish and Ukrainian navy personnel participated in the Eurasia Partnership Maritime Interdiction Operations held April 3-7 in Ukraine’s port of Odessa. The Turkish navy visited Batum, Georgia; Novorossiysk, Russia; Constanta, Romania; and Varna, Bulgaria, and held joint air defense exercises with the Ukrainian navy at Odessa.

Meanwhile, high-level defense industry visits between Turkey and Ukraine have become frequent. The volume of trade between the countries, which was $3.7 billion in 2016, is expected to reach $20 billion in five years now that they have signed a free-trade accord. Their mutual defense industry projects involve satellite technology, warships and navigation systems, radars, engine technology, phased space rockets and ballistic missile systems, solid fuel rocket engines, long-range ballistic missiles and even cruise missiles.

Recently, when Austria restricted technological support for the engine of the Altay main battle tank Turkey designed and is producing using mainly local technologies, Ankara turned to Ukraine. Ukrainian Prime Minister Vladimir Groysman visited Turkey on March 14, and the two countries signed a preliminary memorandum of understanding in which Ukraine is proposing its 6TD-3 engine for the Turkish tank.

What encouraged this rapidly developing defense industry and military technology cooperation between Turkey and Ukraine?

The first reason is geographical: Unlike other NATO and European countries, Turkey is a neighbor of both Russia and Ukraine and is therefore always careful to balance its relations with both.

The other reason is Black Sea geopolitics. According to Devrim Yaylali, an expert on the naval defense industry who spoke with Al-Monitor, although the Black Sea appears to be an inland sea, it still has vibrant, heavy traffic coming from the rivers of Europe and Russia and also from Turkey’s straits. Russia's invasions of Georgia in 2008 and Crimea in 2014 have added to the complexity of security politics of the Black Sea. Ukraine has a long Black Sea coast, and the country's contribution to Black Sea security is important for Turkey.

For Ukraine, Turkey’s role in restraining Russia in the Black Sea and supporting Ukraine’s membership in NATO are important assets.

Yaylali added: “Turkey doesn’t want any other navies in the Black Sea other than those of [coastal] countries. That is why it is crucial for Turkey to maintain good relations particularly with naval and coast guard forces of all [coastal] states. This was demonstrated by the Turkish navy’s visit to all the Black Sea countries" during the 2017 Sea Star exercises.

Another motive for Turkey and Ukraine to cooperate: Both countries want to share military technology to expand and strengthen their national defense industries. Neither has a self-sufficient defense industry.

Yaylali says Ukraine's navy is weak. He explained: “Since the collapse of the Soviet Union, Ukraine has not added any new vessels to its navy. After Russia’s occupation of Crimea in 2014 and its seizure of some of the Ukrainian navy vessels, Ukraine doesn’t have a navy to speak of. Before 2014, Ukrainian warships had gone to the Mediterranean and twice to the Gulf of Aden to support NATO operations. But today, for Ukrainian ships to move out of the Black Sea is only a dream.”

To defend its naval interests, Ukraine will have to make a major investment. It could buy secondhand military vessels from NATO countries or build them in Ukraine. This explains Ukraine’s interest in the experience Turkey has gained in constructing warships locally. Turkey can provide Ukraine with technical support to design and produce a warship in its own shipyards. Turkey can also provide standard NATO weapons systems, sensors and radars for vessels Ukraine can build.

Turkey’s interest in the Ukrainian defense industry is basically in satellite technologies, diesel engines, ballistic missile solid fuel engines and cruise missiles. It is interesting to learn, based on their joint projects, that Turkey is particularly interested in cruise missiles.

“When Turkey’s sale of self-propelled howitzers to Azerbaijan didn’t materialize — after Germany, for political reasons, blocked sales of engines for the howitzers — Turkey began looking to Ukraine as the alternative source of engines,” Mevlutoglu added.

Ukraine also has significant knowledge and experience in basic sciences such as mathematics, physics and chemistry, and their applications. Turkey seriously lags in these fields. The two countries last year launched projects to develop joint sonar systems. They also have student exchange programs, especially in the engineering fields needed in the defense industry.

Of course, not to be ignored is Ukraine's geopolitical importance; most of the natural gas Ankara buys from Russia reaches Turkey via pipelines passing through Ukraine.

What is becoming apparent is that Ukraine is the nearest and most willing potential partner to help Turkey overcome the interruptions in military technology transfer from the United States and Europe because of frequent political disagreements. However, “Ukraine suffered tremendous economic and human resources losses with ongoing clashes since 2014 and Russia’s annexation of Crimea," Mevlutoglu said. "Much of its defense industry was either looted by Russian intelligence services or simply fell into Russian hands because they were in Crimea. That is why we have to wonder if Ukraine can deliver its promises of strategic cooperation. That is why it would be wiser if Ankara focuses on what Ukraine can do instead of what it promises.”