Turkey on course to strategic partnership with Ukraine

Turkey’s thriving collaboration with Ukraine in key defense industry projects seems to be edging toward a strategic partnership that could challenge Russia’s standing in the Black Sea region. 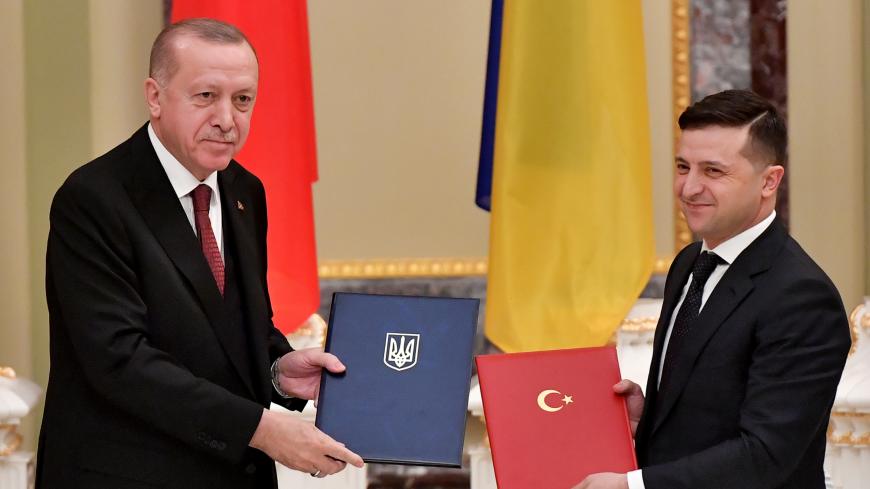 While the Turkish military was testing Russian-made S-400 missiles at the Black Sea coast Oct. 16, President Recep Tayyip Erdogan was hosting his Ukrainian counterpart Volodymyr Zelensky in Istanbul for talks on advancing defense industry collaboration. A fresh set of accords signed at the meeting underscore how Turkey’s defense ties with Ukraine have flourished in recent years against the backdrop of its uneasy relationship with Russia that has alternated between cooperation and rivalry.

Speaking after the signing ceremony, Erdogan said, “Turkey sees Ukraine as a key country for the establishment [of] stability, security, peace and prosperity in the region.” Zelensky said the agreements paved the way for “new opportunities.” Cooperation in the defense industry, he added, is “important for developing our strategic partnership.”

The two leaders’ remarks can hardly be downplayed as diplomatic platitudes. Ukraine today stands out as Turkey’s chief partner in a series of critical military technologies such as turbo prop and diesel engines, avionics, drones, anti-ship and cruise missiles, radar and surveillance systems, space and satellite technologies, robotic systems, active and passive armor protection systems and rocket engines and guidance systems. Technological cooperation between the two sides has dramatically increased over the past two years, laying the ground for a techno-scientific alliance with far-reaching implications for the geopolitical balance of power in the Black Sea basin.

A milestone 2018 deal on Ukraine’s purchase of Turkish Bayraktar TB2 drones set the stage for an expanding cooperation and had a trust-boosting effect between two countries. According to a Turkish defense industry expert who closely follows the matter, Turkish and Ukrainian companies are currently working on around 50 joint defense projects.

Many in Ankara believe the joint venture between Baykar Makina, the manufacturer of the Bayraktar drones, and Ukrspecexport, Ukraine’s state-owned arms trading company, will finally resolve the Turkish defense industry’s long-running shortcomings in engine production.

In January, Kyiv hosted the seventh Turkey-Ukraine defense industry cooperation meeting, another landmark event that paved the way for the transfer of technical knowledge between the two sides to create synergy on critical military technologies.

Erdogan's visit to Ukraine in February and his decision to extend $40 million to Ukraine in support of research and development on engine technologies came as another boost to bilateral ties in the defense field.

During the visit, the two sides opened a fresh chapter of cooperation: space and intelligence satellite technologies. Ukraine agreed to transfer technical knowledge to Turkey to boost Turkey’s fledgling space agency and a satellite research and development lab at Roketsan, Turkey’s leading state-owned manufacturer of missile and rocket engines and satellites.

In late August, Oleg Urusky, Ukraine’s deputy prime minister in charge of strategic industries, paid a visit to Ankara that marked another turning point. The partnership between the two countries evolved into an alliance in critical defense technologies, involving the sale of about a quarter of the shares of Ukraine’s engine manufacturer Motor Sich to Turkish firms, coupled with terms regarding know-how transfer, Turkey’s sale to Ukraine of surface-to-sea Atmaca anti-ship missiles with a range of 200 kilometers (124 miles) — a development that might change the geostrategic balance in the Black Sea region at the expense of Russia if both Ukraine and Turkey deploy those systems on their coastlines — and Ukraine’s purchase of Aselsan-made radar-surveillance and communication systems to modify tanks and mine-resistant vehicles.

During Zelensky’s Oct. 16 visit, the two sides discussed Ukrainian technology transfer to Roketsan’s space research and development center, a concrete step enabling partnership in critical engine and space technologies and how Ukraine might also help in overcoming the protracted engine problem in Turkey’s Altay national tank project, including the prospect of Ukraine supplying the diesel engine and other components of the first batch of tanks.

Meanwhile, Turkey needs a new aircraft to ramp up its military transport fleet, which includes aging planes such as the C-160s. Turkey’s recent military involvement in Libya and other conflict zones has underscored a pressing need for a jet engine-powered airlifter and Ukraine’s AN-178 aircraft is being considered as an option.

According to Turkish sources knowledgeable of the matter, the Turkish side formally reiterated its desire to develop a joint intelligence satellite with Ukraine during Zelensky’s visit. Turkey’s state-controlled military software developer Havelsan and Ukraine’s largest defense holding company Ukroboronprom have already signed a deal to cooperate in the production of satellite technology.

The two sides also began discussions on the prospect of joint ship maintenance and even Ukraine’s purchase of Turkish MILGEM-type frigates and gunboats as part of efforts to rejuvenate the aging Ukrainian navy, according to the sources.

For Turkey, strategic partnership with Ukraine promises a way out out enduring snags in its defense dealings with Western partners, including difficulties in securing technical knowledge and joint production as well as bans on exports to third countries when it comes to military products manufactured with foreign inputs. Hence, Turkey hopes to achieve the domestic production of critical military technologies and gain a free hand in exports.

Bilateral cooperation in the defense industry field might lead to joint military exercises and training enhancing the interoperability of the Turkish and Ukrainian militaries — a prospect that could alter the geostrategic balance in the Black Sea region. Moscow is doubtless keeping a close eye on the growing Turkish-Ukrainian rapprochement.