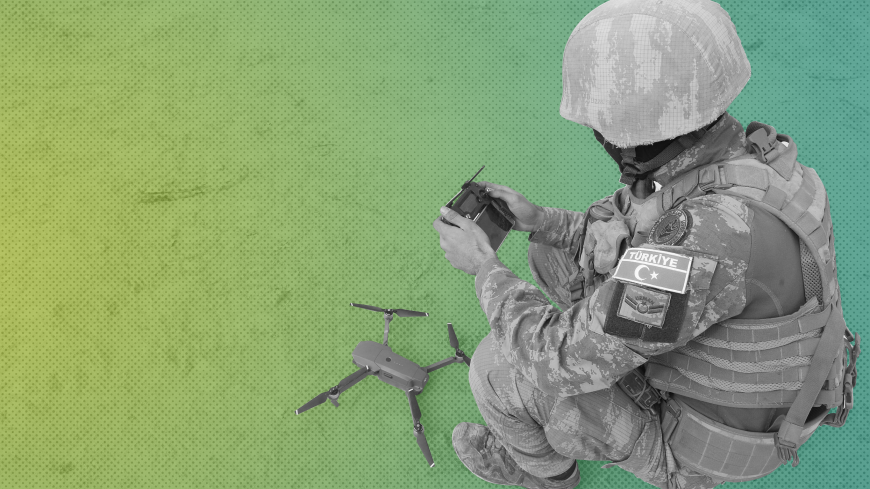 A Turkish soldier prepares a drone to monitor the area as they inspect tunnels in Afrin, Syria, Feb. 17, 2018. - Photo by Soner Kilinc/Anadolu Agency/Getty Images

Turkey has successfully test-fired its first cruise missile with a warhead capable of penetrating a concrete bunker. The SOM-B2 test is part of Ankara's efforts to develop a self-sufficient defense industry and decrease Turkey's dependence on foreign arms producers.

Baykar Makina is owned by the family of President Recep Tayyip Erdogan's son-in-law, Selcuk Bayraktar, who is the chief technical officer. The company makes TB2 drones, which have been in active use in counterterror operations for three years in Turkey and Iraq, and for reconnaissance and surveillance in the Aegean Sea, Eastern Mediterranean and northern Syria.

With the TB2, Turkey became the sixth country in the world — after the United States, Russia, China, Israel, Pakistan and Iran — to field an operational drone. As of July, the TB2 — a medium-altitude, long-endurance (MALE) drone — had completed 100,000 operational flight hours by July. The first exports of the TB2 were to Qatar, followed by Ukraine.

The fundamental motive behind Baykar Makina's joint venture with Ukrspecexport is the eternal engine problem Turkey's defense industry has been unable to cope with. Under the joint venture, Baykar Makina will procure from Ukraine turboprop engines that generate 950 to 1,050 brake horsepower (bhp) from the MS-500V-S family, and AI-450C turboprops that provide 450-630 bhp, and use them with Akinci drones.

Turkey received sample engines in early September, and Bayraktar shared the first visuals of the tests Sept. 7 on Twitter. The Akinci drone will have a wingspan of 20 meters and a maximum takeoff weight of 4,500 kilograms (9,900 pounds.) It is expected to be able to stay aloft for as long as 24 hours and attain an operational ceiling of 12,192 meters (40,000 feet). These numbers almost double the statistics for the TB2.

According to the Turkish Defense Industry Management, the Akinci will be able to carry internal and external payloads as heavy as 450 to 900 kilograms (990 to 1,980 pounds), respectively. The air vehicle will be equipped with Aselsan AS-developed mission equipment, active electronically scanned array (AESA) radar, and electronic warfare (EW) and satellite communication systems enabling the platform to operate independently from a ground station.

It will be able to carry a range of external weapons, such as Roketsan MAM-L precision-guided bombs (PGBs), Cirit guided rockets and the latest MAM-C smart munition, which can engage targets up to 8 kilometers (5 miles) away, depending on its launch altitude. More importantly, it will accommodate a Roketsan SOM-B2 air-to-surface cruise missile with a range of 250 kilometers (155 miles) and a selection of PGBs based on the Mk 82 general-purpose bomb.

Now that the SOM-B2 test-fire was successful Sept. 6, it's expected to be the most critical ammunition of the Akinci, which is to be deployed with the Turkish Armed Forces in 2021.

Ankara pays the utmost attention to Baykar Makina's efforts. Despite the raging economic crisis in Turkey, Baykar Makina this month was granted government support of around $120 million as well as export and value-added tax exemptions to build a massive plant in the Esenyurt district of Istanbul to produce the Akinci, which will be Turkey's first long-range armed drone, while doubling production of the TB2.

According to the Turkish Official Gazette, the new plant will create 1,000 jobs and manufacture 46 TB2s, 37 TB2 communication systems, 37 ground stations and, most importantly, 36 Akinci drones in two years.

The company is expected to deliver 24 of the Akinci drones to the Turkish military in two years and export 13 to Ukraine. Futhermore, Qatar, Azerbaijan and Malaysia are interested in buying the Akinci.

What is the strategic rationale behind Ankara's ambition to have long-range, armed drones with heavy payloads and precise airstrike capability? In what kind of operations does Ankara plan to use these systems?

Ankara reveals its vision by defining Akinci as an "unmanned air-to-surface fighter plane" — more than a drone. Akinci and SOM-B2 cruise missiles with their long ranges will give Turkey unmanned precision strike capability at a distance of 600 kilometers (373 miles). This means Akinci will be replacing F-16 jets currently operating in northern Iraq and later in northern Syria against the Kurdistan Workers Party, which Turkey considers a terrorist group. When the Akinci is in service, Turkey will acquire 24/7, low-cost, low-risk aerial surveillance capability over the Aegean Sea and the eastern Mediterranean.

The US decision to open northeast Syrian airspace to Turkish drone surveillance but not to Turkish helicopters shows Ankara how crucial airspace superiority is in its neighborhood. This is why unmanned aerial platforms and probably unmanned fighter jets will be Ankara’s priorities in the near future.

At the moment, Turkey faces three important problems regarding the Akinci. The first is ensuring continued engine procurement from Ukraine when the drone’s serial production begins. The second is potential deviations of ammunition loads and center-of-gravity issues arising from Akinci’s mass and wingspan. Finally, Akinci depends on GPS, which presents a serious risk. Today, the only global alternative to US-controlled GPS is Russia’s GLONASS, which reached full global coverage a couple of years ago. Will Akinci remain linked to GPS or move on to GLONASS?

The answer to this question is obvious from the Russian-made S-400 system and F-35 jet fighter crisis. As long as Ankara maintains its commitment to develop drone technologies and autonomous systems, and as long as the United States doesn’t contribute, the only place for Ankara to turn is Moscow. The crisis of the United States refusing to provide sophisticated military technologies to Turkey while Ankara is cooperating with Moscow is a vicious cycle. The greater the crisis between Ankara and Washington in defense/security domains, the closer the relations between Ankara and Moscow — which in turn means more crises with the United States. Sadly, today neither Donald Trump nor Erdogan appears worried about how to break the cycle.

Naturally, this growing crisis with the Western security block is becoming chronic, which very much pleases the Kremlin.