The “dronization” of Turkey’s power projection abroad continues with a new unmanned aerial vehicle that Ankara plans to use against PKK militants in Iraq and Syria as well as in brewing regional conflicts. 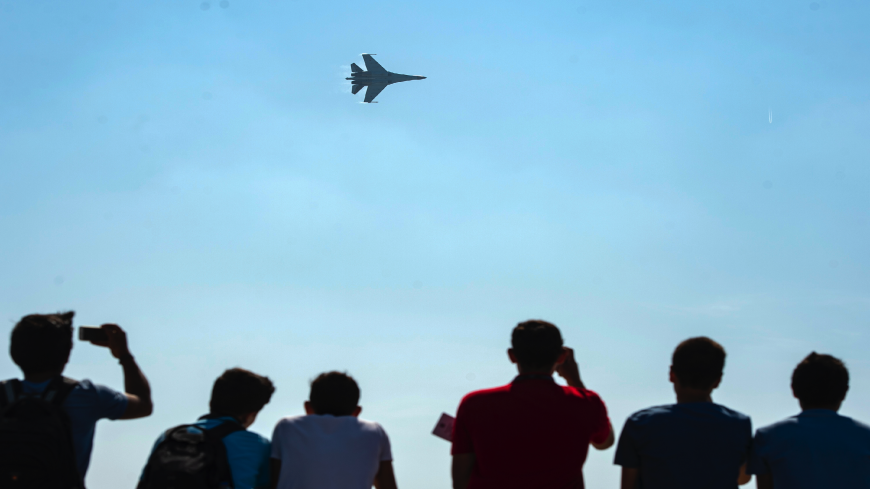 Spectators look on as a Russian Sukhoi Su-35 fighter flies during an air show at the Teknofest festival at Ataturk Airport in Istanbul on September 17, 2019. - Ankara is looking to alternatives after it was removed by the US from the F-35 fighter jet program in response to its purchase of S-400 missile systems delivered by Moscow. - YASIN AKGUL/AFP via Getty Images

Turkey is gearing up to start production of a new high-altitude, long-endurance drone, hoping to extend its military reach in the region and compensate, even if fractionally, for the loss of the F-35 new-generation jets after a row with Washington.

Baykar Makina — a company owned by the family of Selcuk Bayraktar, the young son-in-law of President Recep Tayyip Erdogan — announced Aug. 14 that the second prototype of the high-altitude, long-endurance variant of the Akinci drone, whose name means “raider” in Turkish, had successfully completed test flights and was ready for production.

A service ceiling of 40,000 feet and 24 hours of endurance will make the new drone immune to close-range air defense systems and provide it with an operational radius of 600 kilometers (373 miles). It will have a maximum takeoff weight of 4.5 tons and a payload capacity of 1,350 kilograms — 900 kilograms external and 450 kilograms internal — and be powered by two Ukrainian Ivchenko-Progress AI-450C turboprop engines, each generating 550 horsepower. Turkey has so far imported 12 such engines from Ukraine, its main partner in the field of drone technology.

Some may ask what’s the big deal about a drone that, at the end of the day, is rather cumbersome, with a speed of no more than 400 kilometers (some 250 miles) per hour. But Ankara has high expectations for what the drone could deliver.

Ankara sees the Akinci as its main aerial vehicle for intelligence-surveillance-target acquisition (ISTAR) and command-control-communication (C3) tasks in the next decade. The drone will be equipped with indigenously developed systems, including a multi-role active electronically scanned array radar, a SAR/GMTI radar, a wide-area surveillance system, electronic warfare, an electronic and signal intelligence suite, and beyond-line-of-sight satellite communications systems, the sum of which makes the Akinci the best-ever ISTAR+C3 asset the Turkish military has had.

Furthermore, the drone can be armed with a wide range of air-to-ground munitions including MAM-L, MAM-C, CIRIT, Mk81 and Mk82 general-purpose bombs and smart munitions. Roketsan’s SOM-A cruise missile, which has a range of 250 kilometers (155 miles), is also planned for integration into the Akinci. The combination of a relatively slow drone, powered by a turboprop engine, with standoff cruise missiles (SOM) might come across as illogical, but it is likely to become a game changer for Ankara in the next decade, in which it expects mostly low-intensity conflicts with violent non-state actors such as the Kurdistan Workers Party (PKK) and the Islamic State in its neighborhood rather than full-fledged conventional warfare. Namely, the new drone will allow the Turkish military to use high destructive power and precision guiding against targets up to 800 kilometers (nearly 500 miles) away, something that it has been able to do only with F-4E 2020 Terminator and F-16 jets thus far.

In operations in Iraq and Syria, for instance, Turkish drones have targeted light structures and unarmored ground vehicles at a depth of no more than 100 kilometers (62 miles) from the border, using 22-kilogram MAM-L smart micro munitions with a range of 8 kilometers (5 miles). The Akinci-SOM combination will allow strikes of higher destruction power on critical targets within a distance of up to 800 kilometers.

Some Turkish analysts claim the Akinci could be equipped with domestically developed air-to-air missiles, but given the drone’s relative slowness and limited maneuver capacity, this seems to be overblown anticipation. Yet some observers even argue developers should work on an advanced variant of the drone, capable of deploying on the TCG Anadolu, a domestically developed, multipurpose amphibious assault ship, which the army is scheduled to receive in 2021.

Ankara plans to have six Akincis operational by early 2021, with Azerbaijan, Malaysia, Qatar and Ukraine said to be interested in purchasing the drone.

The Akinci is coming just in time for the Turkish air force, whose F-16 and F-4 fleets are aging. Worse, its operational capacity has badly weakened after Washington withheld a batch of F-35 stealth jets from Turkey over its purchase of Russian air defense systems last year. Moreover, Turkey’s indigenous TFX warplane project has been fraught with financial and technical hitches. And even if the project advances as planned, the army is unlikely to receive the jet by the early 2030s. Hence, the next decade is critical for the air force. The Akinci will strengthen Ankara’s hand, providing a new option for long-range, air-to-ground missions in low-intensity conflict environments and thus alleviating the burden of the F-16s.

Given its focus on maximum air endurance at the expense of speed, the drone will be a fresh option also for less-costly and longer air patrol tasks, especially over the Aegean and the eastern Mediterranean, again reducing the workload of the F-16s.

The Akinci’s arrival will certainly lead the Turkish air force to update its air-to-air and air-to-land warfare doctrines. A new concept under discussion in Ankara envisions F-16 jets, loaded with air-to-air munition, providing cover to Akinci drones as they fly to target areas to strike targets on the ground. In other words, such air raids would mean combat tasks shared evenly by warplanes and drones.

Also, the Akinci will allow Turkey to use satellite communication to set up a regional drone network with a range of at least 800 kilometers and an altitude beyond the reach of low- and medium-altitude air defense systems.

Imagine, for instance, a Turkish drone base in Qatar or Somalia. An Akinci taking off from such a base can fly as far as 600 kilometers (373 miles) to fire a SOM missile. And with the missile’s own range more than 250 kilometers (155 miles), Turkey would become capable of unmanned strikes on targets at a distance of up to 850 kilometers (528 miles).

The Akinci’s main downside is the reliance on Ukraine for its turboprop engine, which requires frequent maintenance and spare part supply. Turkey faces similar engine problems in other key projects for indigenous military equipment, including the TFX jet, the Altay main battle tank and the T129 attack helicopter. The reliance on foreign-made engines is increasingly emerging as the most crucial soft spot of the entire Turkish defense industry. Ankara is counting on know-how from Ukrainian and British companies and funds from Qatar to develop fully indigenous turboprop, diesel and jet engines, but Turkish companies have a long way to go to achieve that objective.

Nevertheless, the Akinci project promises to make Turkey a global drone power, with Ankara looking to use the new drone mainly to strike the PKK in Iraq and Syria but also for power projection and perhaps precision strikes in Libya, the eastern Mediterranean and the Aegean.

While the Akinci’s game-changing prospects are evident in military terms, its impact on diplomacy could go either way. Will it contribute to a speedier resolution of Ankara’s foreign policy crises or further complicate and prolong them? The answer, so it seems, will emerge before too long.