The Russia-Ukraine crisis could expand to affect many countries, and Turkey's position is potentially crucial. 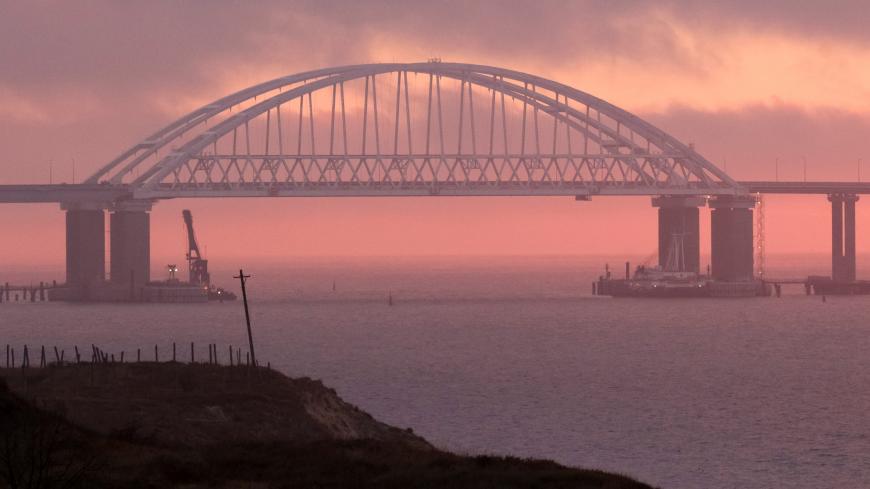 A general view shows a road-and-rail bridge, which connects the Russian mainland with the Crimean peninsula, at sunrise in the Kerch Strait, Crimea, Nov. 26, 2018. - REUTERS/Pavel Rebrov

Tension that erupted Nov. 25 between Russia and Ukraine in the Black Sea’s Kerch Strait is continuing, as other countries assess how the row might affect their own situations. The increasing pressure there reminds people of the Russia-Georgia clashes of August 2008.

The critical Kerch Strait allows access from the Black Sea to the Sea of Azov, an internal sea of Russia and Ukraine. The strait brought the two countries face to face that day, when a Russian ship rammed a Ukrainian tugboat, seizing it and two of Ukraine's small armored artillery vessels, as well as two dozen crew members, six of whom were injured. Russia is still holding the vessels and crew.

The 33-kilometer (20-mile) strait also allows access to Azerbaijan, Turkmenistan and other Central Asian and Caucasus countries via Russia’s Don and Volga rivers. In short, the Kerch Strait is a vital vein for the economies of at least 10 countries.

Use of the Azov Sea and Kerch Strait is governed by an agreement between Russia and Ukraine ratified in 2003. The then-friendly Russian Federation and Ukraine signed a treaty of cooperation granting freedom of navigation to merchant ships, warships and state noncommercial vessels flying the flag of the Russian Federation or Ukraine.

Earlier this year, Russia started to delay merchant ships in the Azov Sea by detaining and inspecting them if they were headed for a Ukrainian port. These legal but abusive inspections delay the ships at least two or three days. The European Parliament stated that from April to October, Russia had detained at least 120 vessels flying EU member states' flags destined for Ukraine.

In recent months, Russia has moved naval units from its Caspian and Black Sea fleets to the Azov. As a countermove, Ukraine decided to reinforce its naval assets in the region and create a new base at Berdyansk, a port in the country's southeast.

In early September, Ukraine deployed two Gurza-M class gunboats to Berdyansk. Instead of sailing through the Kerch Strait, they were moved over land by truck. This meant Russia wasn't in a position to prevent this deployment. These boats are still operating in the Azov Sea.

Furthermore, on Sept. 24, Ukraine's navy dispatched the command ship Donbas and the seagoing tug Korets through the strait. During that deployment, the tug was towing the command ship. According to the Ukrainian Defense Ministry, at least seven vessels from Russia's Black Sea fleet and Coast Guard closely escorted them during their passage through the strait, but didn't intervene — as they would do Nov. 25. Both the Donbas and Korets were unarmed and their passage created no direct threat to Russia — but it was a highly symbolic move by Ukraine in answer to Russia’s aggressive actions in the Azov.

Thus, Ukraine’s decision in November to send two more Gurza-M class gunboats — the Berdyansk and the Nikopol — and the unarmed tug Yana Kapu by sea instead of by land wasn't made because of nautical necessities. Naval expert Devrim Yaylali told Al-Monitor the decision challenged Russia's position and showed that Ukraine doesn't accept Russia's sudden, unilateral change to the 2003 agreement.

“On the other hand, Russia revealed that it would confront Ukrainian armed forces without proxies, rather than putting its assumed ownership of the Kerch Strait in question, and demonstrated that it was ready to physically block the strait, if necessary, by all means,” Yaylali said.

As a result, Kiev has lost a third of its Gurza-M class gunboats, which are much needed to strengthen the Ukrainian navy.

German Chancellor Angela Merkel, after meeting Dec. 1 with Russian President Vladimir Putin at the G-20 summit in Buenos Aires, said, “Freedom of navigation in the [Azov] Sea must be ensured.”

But European countries — although indirectly supporting Ukraine by stressing freedom of navigation — aren't really willing to engage in military confrontation with Russia.

Though the US this week reportedly is preparing for the option of sending a warship to the Black Sea, a naval strategist speaking to Al-Monitor without identifying himself said neither the US nor European countries are keen to do so. He noted that Russia, using the pretext of a crisis, might threaten ships and planes that use Turkish airspace and territorial waters with anti-access/area denial targeting Crimea and its environs.

This expert said the situation isn't an issue right now because of the current close ties between Ankara and Moscow, but would probably become a military confrontation should tensions arise between them.

According to Moscow-based foreign policy analyst Kerim Has, the matter should be viewed from a realpolitik angle.

“Russia doesn’t want to debate its [2014] annexation of Crimea with Kiev," Has told Al-Monitor. "Despite criticisms by Western countries, Moscow tries to formulate a legitimate cover to its unilateral actions and faits accomplis."

He added that Moscow has rejected any reference to Crimea in the Minsk Protocols that suggests solutions to clashes in Ukraine and also did not consult with Kiev or anyone else while deploying S-400s in Crimea or constructing the Kerch Strait Bridge (Crimean Bridge).

The S-400s Russia has deployed in Crimea today can cover Turkey's entire airspace over the Black Sea. No power, be it Kiev, Turkey or an alliance such as the EU or NATO, is willing to challenge Russia, except perhaps with limited economic sanctions.

Has said Russia — by increasing its military presence in the Azov Sea to control use of the Berdyansk port and by blocking Kiev’s military reinforcements at the port of Mariupol against the separatists in Donbass — may be preparing for a military operation. He said deploying S-400 batteries and Pantsir-S1 missiles at Crimea offers Russia multiple advantages when it comes to dealing with Turkey and other countries, including those of NATO, for use of Black Sea airspace and territorial waters. It's possible that Russia is on the verge of an era of stronger military presence in the region.

It's clear that the expanding crisis between Russia and Ukraine will open the way for a deeper conflict in the Black Sea — which won’t benefit Turkey. Ankara has called on both parties to settle their differences peacefully. But for Ankara to take on a mediation mission isn't realistic or compatible with its interests.

Ankara hasn't recognized Russia’s annexation of Crimea, so any mediation effort could trigger hard debates, and nothing guarantees Russia would return Crimea to Ukraine. A unilateral attitude by Ankara over Crimea won’t produce anything positive. If Ankara is to mediate, it would be more appropriate for it to do so with EU countries such as Germany and France, or to encourage those countries to serve as mediators.

At present, the general inclination in Ankara is to refrain from getting between Ukraine and Russia, at least until Turkey's election March 31.