Ukraine’s growing pressure on Turkey to act against Russian shipments of “stolen” Ukrainian grain highlights the importance of establishing a safe export corridor under UN auspices. 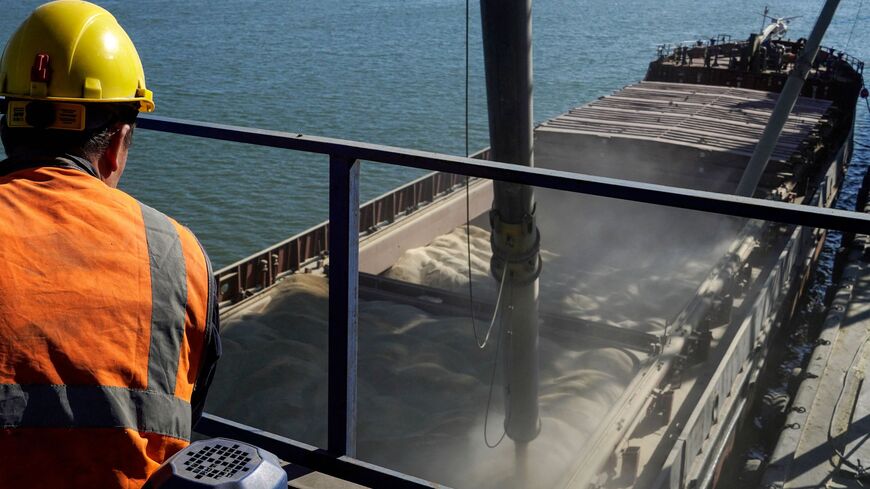 Picture taken on June 11, 2022, shows the loading barley onto a cargo ship Sormovo-2 in the international port of Rostov-on-Don. This cargo ship will go to Turkey. - STRINGER/AFP via Getty Images

Turkey’s balancing act between Russia and Ukraine may have raised its diplomatic profile in the war, but not without dropping some hot potatoes in its lap, as evidenced by Kyiv’s growing pressure on Ankara to help prevent shipments of Ukrainian grain from Russian-occupied regions.

In a move that might set the stage for a fresh crisis on the Turkey-Russia-Ukraine triangle, Turkish authorities halted a Russian-flagged ship off the Black Sea port of Karasu last week, heeding a request from Kyiv, which claims the vessel, Zhibek Zholy, is carrying grain from Russian-occupied territories. Ukraine's ambassador to Ankara, Vasyl Bodnar, made the situation even more delicate for Turkey, lauding “full cooperation” on the part of Turkish authorities, which, he said, had detained the ship.

Turkish officials, meanwhile, have only said they are investigating the cargo and the ports of departure and destination of the ship. “The allegations are being investigated thoroughly. It is not written on the grain who it belongs to,” a senior official told Reuters, adding that Turkey was in contact with Russia, the United Nations and third parties on the issue.

The incident comes at a time when Turkey is hoping to assume a key role in a UN-proposed sea corridor to restart Ukrainian grain exports to help ease the global food fears sparked by the war.

A Kremlin spokesman said initially they had no information the ship had been detained. Then, Foreign Minister Sergey Lavrov said, “The ship does appear to be Russian, sailing under the Russian flag. I think it belongs to Kazakhstan, while the cargo was being shipped under contract between Estonia and Turkey."

KTZ Express Shipping, the Kazakhstan-based owner of the Zhibek Zholy, says it has leased the ship to a Russian company not affected by Western sanctions.

In a June 30 letter to Turkey’s Justice Ministry, Ukraine's prosecutor-general's office urged an inspection of the ship, saying it was involved in the “illegal export of Ukrainian grain” from Russian-occupied Berdyansk and headed to Karasu with 7,000 tons of cargo. A Ukrainian Foreign Ministry official had earlier said the ship had loaded some 4,500 tons of grain from Berdyansk, on Ukraine’s Azov Sea coast. According to maritime traffic monitors, the Zhibek Zholy anchored about a kilometer off Karasu on July 1 after passing through the Kerch Strait on June 29.

Moscow had announced in early June that Berdyansk and Mariupol were ready to resume grain shipments. An official of the Russian-imposed administration in southeastern Ukraine wrote on Telegram last week that “the first cargo ship” had left Berdyansk, carrying 7,000 tons of grain to “friendly countries.”

According to Bodnar, Ukraine expects Turkey to confiscate the Zhibek Zholy’s cargo at the conclusion of the probe. The ship remained offshore and unloaded on July 5. Turkey might protract the probe in a bid to prevent the issue from growing into a crisis with either Russia or Ukraine.

On June 13, Ukraine had asked Turkey to help investigate three other Russian ships suspected of transporting grain stolen from Kherson, according to Reuters. The agency said it was unable to determine the origin or end destination of the grain in the ships named in Kyiv’s request. The three large freighters — Mikhail Nenashev, Matros Pozynich and Matros Koshka — reportedly traveled from Crimea’s main grain terminal in Sevastopol in April and May. The deputy head of the Russian-installed administration in Kherson said local farmers were responsible for transporting grain to Crimea and denied any knowledge of shipments to Turkey or the Middle East.

Turkish Foreign Minister Mevlut Cavusoglu said on June 23 that Ankara had looked into Ukraine’s complaints and established that “the ships’ port of departure and the origin of the goods is Russia on the records,” without saying which ships.

Citing satellite imagery and ship-tracking data, Reuters reported that the Mikhail Nenashev had offloaded cargoes at two Turkish ports since March, while the Matros Pozynich and Matros Koshka had docked in Syria several times after visiting Sevastopol’s grain terminal.

Turkey’s detention of the Zhibek Zholy is significant from several aspects. First, the vessel’s arrival in Karasu raises the question of whether Turkey is the buyer of the grain. According to Russian media, Russian company Green Line leased the ship for a year from KTZ Express Shipping in October 2021 and concluded a separate deal with Estonian grain-trading company Mangelbert OU to transport Ukrainian grain to Turkey.

Yet such a purchase would add weight to Ukrainian claims that Turkish buyers are among the recipients of looted grain and leave Ankara in a tight spot. Cavusoglu had maintained last month that Ankara is “against Ukrainian grains or other goods being taken by Russia” and would not allow such goods to come to Turkey.

Second, the incident might undermine the planned UN-sponsored shipping corridor and call into question Turkey’s reliability as a mediator between Russia and Ukraine. Russia rejects the involvement of third parties such as the British navy in securing the grain corridor and demands a role in controlling the traffic to prevent arms shipments to Ukraine. The produce of Russian-occupied regions is another crucial point of contention. Russia argues that buying grain from local farmers should not be a problem, while Kyiv maintains that exports from occupied territories amount to theft, regardless of how the grain is procured.

Third, the incident shows that Turkey cannot easily escape Ukraine’s radar if it hopes to get wheat on the cheap without Kyiv’s consent. And if the parties agree on the grain corridor, Turkey does look for more favorable terms. Agriculture Minister Vahit Kirisci said June 7 that Ukraine had agreed to a 25% discount on grain sales to Turkey but remained wary of resuming exports due to security fears.

According to Kyiv, 84 ships laden with more than 22 million tons of grain are stuck at the Odessa port, unable to sail because of naval mines planted during the war. Ukraine fears Russia will attack the port if the mines are removed.

The grain corridor plan involves the establishment of a command center in Istanbul to coordinate mine clearing at the Odessa port and elsewhere in the Black Sea as well as the routes, insurance coverage and safety of the ships. The plan, aimed at facilitating both Ukrainian and Russian grain exports, is of far-reaching international importance, given that Africa alone relies on the two countries to meet 40% of its wheat needs.

The issue was high on the agenda of Lavrov’s visit to Ankara on June 8. Turkish defense officials discussed technical details with Russian counterparts in Moscow on June 21. A four-way meeting between Turkish, Russian, Ukrainian and UN officials is expected in Istanbul, but no date has been set thus far.

Russian media speculate that Ukraine’s request regarding the Zhibek Zholy is aimed at forcing Turkey to take sides in the conflict. According to Nezavisimaya Gazeta, “Turkey is not expected to bow down to Kyiv’s pressure. Otherwise, Ankara will lose its role as a mediator in the resolution of the global grain crisis.”

Some in Turkey’s opposition media, meanwhile, have jumped to the far-flung conclusion that Turkey’s mediation for a grain corridor has already fallen through.

Diplomatic efforts on the issue continue. Turkish and Ukrainian defense officials met in the shadow of the crisis on July 4 to discuss both the corridor and the evacuation of two Turkish military cargo planes stranded in Kyiv. The corridor was on the agenda also of Italian Prime Minister Mario Draghi, who met with President Recep Tayyip Erdogan in Ankara the following day. Draghi praised Turkey’s mediation efforts and expressed hope that Russia would agree to the plan, while Erdogan pledged to “intensify contacts on the issue within a week or 10 days and try to reach a result.”