Turkey's ambassador to Kyiv has been summoned to voice Ukraine's displeasure over its grain stolen by Russia and shipped to Turkish ports. 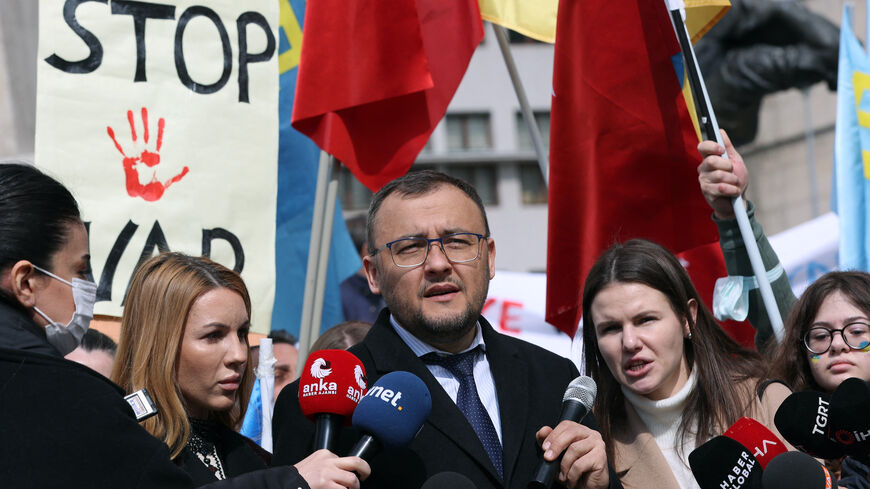 Ukrainian Ambassador to Turkey Vasyl Bodnar (C) speaks to media as he takes part in a protest against Russia's military invasion of Ukraine at Ulus districit in Ankara, on March 5, 2022. - ADEM ALTAN/AFP via Getty Images

Turkey’s relations with Ukraine are showing increasing signs of strain five months into Russia’s invasion of its Black Sea neighbor. The brewing friction stems from Ukrainian allegations that Russia is stealing its grain and shipping it to Turkey and Ankara’s reluctance to crack down on the illicit trade.

Turkish inaction is a symptom of the deeper malaise besetting the two countries as Ankara seeks to keep ties with the Kremlin steady even as Russian forces continue to commit atrocities against Ukraine. Some accuse Turkey of tilting ever more toward Russia, a view that pro-Kremlin media channels in Ukraine zealously propagate. Turkey insists that it is “pro-Ukraine” but “not anti-Russian.”

In an exclusive interview Wednesday with Al-Monitor, Ukraine’s ambassador to Ankara, Vasyl Bodnar, acknowledged that the grain issue was bedeviling the “strategic partners.”

Tensions escalated today after Ankara allowed a Russian vessel to leave the port of Karasu on the Black Sea. Ukraine summoned Turkey's ambassador to Kyiv to air its displeasure over what Foreign Ministry spokesman Oleg Nikolenko called “an unacceptable situation.”

“We regret that Russia’s ship Zhibek Zholy, which was full of stolen Ukrainian grain, was allowed to leave Karasu port despite criminal evidence presented to Turkish authorities,” Nikolenko said.

Turkish customs officials seized the Russian-flagged Zhibek Zholy after Kyiv said the cargo was illegally transporting 7,000 tons of grain out of Russian-occupied Berdyansk, a port in southeast Ukraine. The move followed a flood of similar demands from Ukraine for numerous ships, which open-source intelligence reports indicate are transporting Ukrainian grain mainly from Russian-occupied Crimea and from newly wrested Ukrainian ports. Bodnar said Kyiv had “bombarded” Ankara with “notes and information” supporting the claims.

“As I was explained by Turkish colleagues so far they only have documents showing that these are Russian ships carrying Russian grains from Russian ports,” Bodnar said, echoing statements by Turkey’s foreign minister, Mevlut Cavusoglu.

Bodnar continued, “We provided them different information on grain, including ones of legal character. Let’s look at some details. For example, let’s look at who is receiving the grain. In Iskenderun, for example, there was a Russian company that owns the port and was unloading some of this grain. The Turkish authorities need to thoroughly check who the buyers are and what sort of contracts they have signed.”

The envoy acknowledged, nonetheless, that establishing theft is a challenge. The ships typically use false documents and switch off their short-range coastal tracking systems to avoid detection when loading goods. "There is a problem of judicial character; we should be able to establish that the grain is stolen. From a legal standpoint, we need formal testimony from witnesses of the theft, from the owners of the grain or analysis of the grain,” Bodnar noted.

However, the case against the Zhibek Zholy was watertight. Ukrainian officials said they had all the evidence that the ship had departed from Berdyansk. Even Russia’s foreign minister, Sergey Lavrov, confirmed that the ship was Russian-flagged but then claimed that it belonged to Kazakhstan and was being “carried on a contract between Estonia and Turkey.”

Ukraine was clearly hoping that diplomatic pressure from Washington and the EU combined with a slew of damning investigative reports splashed across prominent Western outlets in recent weeks would shame Ankara into action.

The optimism proved premature and the Kremlin was delighted. “Having an important NATO country not joining in sanctions against it is a huge plus for Russia, and if it can drive a wedge between Turkey and Ukraine as it has between Turkey and NATO, all the better,” said a Western diplomat speaking not for attribution. The diplomat was referring to Turkey’s threats to block Sweden's and Finland’s membership ahead of the alliance’s summit in Madrid.

“I was pretty sure from the very beginning that this vessel, as others, will be released,” said Yevgeniya Gaber, a former Ukrainian diplomat who served in Ankara and is a nonresident senior fellow at Carleton University’s Center in Modern Turkish Studies and the Atlantic Council. “I think it is time for Ukraine to manage its expectations regarding Turkey and its readiness to cooperate on matters involving Turkish and Russian interests,” Gaber told Al-Monitor.

The rebukes delivered from Kyiv today may signal just such a shift. They certainly mark a change from the effusion oozing from Kyiv in the early days of the conflict when Turkey’s TB2 Bayraktar drones wrought destruction on Russian forces.

“I would say that the public in Ukraine has always been very favorable toward Turkey long before the invasion, and such sentiments were at their peak during the first weeks of the invasion when we got the Bayraktars,” Gaber said. "Everything that followed afterward, Turkey not joining [US and EU] sanctions against Russia, and inviting Russian oligarchs and Russian enterprises to move their businesses to Turkey, not to mention Russian tourists, has raised doubts,” she added. “Where is Turkey in this Russian-Ukrainian war. Ukrainians expect a much clearer decision on which side Turkey takes in this war.”

While Turkey has sealed its straits linking the Black Sea and the Mediterranean to Russian naval ships and its airspace to Russian military planes, it has blocked passage of NATO ships through the waterways as well and kept its airspace open to Russian commercial planes.

Timothy Ash, a London-based emerging-market strategist who closely follows Turkey and Ukraine, said, “I think in the beginning that the Bayraktar thing won Ukrainian hearts. But now I think there is a realization that the Turks are trying to exploit the conflict.”

Turkey’s finance minister, Nurettin Nebati, reportedly told a group of Western financiers as much during a recent briefing. “He said ‘we are going to benefit from the sanctions [on Russia] as we did in Iraq,’” one of the bankers present at the gathering told Al-Monitor on condition of anonymity.

Bodnar concedes that the mood in his country is starting to sour.

“Since the start of the war, the Ukrainian public has become very sensitive about Russia and Russians and the narrative that Turkey is balancing both sides. This perception of cooperation with Russia, Russian tourists, affects public opinion in Ukraine. In meetings with Turkish officials, we asked them to consider the opportunity to join in sanctions against Russia, but that it is their choice.”

The large number of Russians — there are around 400,000 of them — who moved to Turkey after the beginning of the war “is a matter of concern” and "a matter of national security for Turkey as well.”

The envoy reckons that over 300 Russian companies have set up in Turkey since Russia’s Feb. 24 assault on his country. “If they flourish, they can become a vehicle for Russia to avoid international sanctions and create some problems for Turkey in future.”

Bodnar insists, nonetheless, that “in practical terms” Turkey has not changed its policy vis a vis Ukraine. “Turkey is the only country that brought Russia and Ukraine to the negotiating table. And that is of great significance.” He blamed Russia for the failure of the talks that were launched in Istanbul in late March.

Turkey has consistently refused to recognize Russia’s 2014 annexation of Crimea and continues to provide Bayraktar drones, combat vests and helmets to Ukrainian forces. Talks are underway for Ukrainian military forces wounded in the war to be treated in Turkish hospitals.

“The Bayraktar drones are the only combat [drones] that are being provided to Ukraine from abroad. They remain critical to the war effort and are very effective. I cannot comment on the numbers or how they are delivered. And not everything can be publicized about their use for obvious reasons,” Bodnar said.

However, with Turkey’s economy in shambles amid rising global food and energy prices and nationwide elections around the corner, Turkey’s President Recep Tayyip Erdogan is desperate for the war to end. “There is a desire to end it at any cost even if it means getting the Ukrainians to end the war on Russia’s terms,” Ash told Al-Monitor. Moreover, opinion polls suggest that many Turks believe the canard that the United States ignited the war and is “using” Ukraine to get at Russia.

Bodnar says the reality is more nuanced. “If you look at the figures, almost everyone in Turkey is supporting us.” Moreover, there was “no question” from the beginning of the war and “in view of the heroic resistance the Ukrainian people are displaying” that the Turkish government would “tell us to compromise or bow to Russian demands. There has been no such pressure.”

Still, it’s a measure of Ukraine’s mounting exasperation that its Foreign Ministry finally spoke up and at a particularly delicate time. Turkey and the UN are negotiating with Russia and Ukraine to establish a food corridor to allow shipments of millions of tons of grain from Ukraine’s blockaded ports. Should the talks fail, the UN warns that a global food crisis will ensue with millions of impoverished Africans the worst hit. Ukraine is among the world’s top suppliers of grain. Turkey has a vested interest in a deal because it is a top re-exporter of Russian and Ukrainian grain.

Russia says a corridor could be used to ferry weapons to Ukraine. Ukraine says demining the seabed around its ports for ships to dock would allow Russia to attack. Ukraine insists that third-party governments and the UN should provide security guarantees for the food corridor.

Turkey has offered to serve as a guarantor, but Ukraine remains skeptical. “If Turkey were to be a guarantor country, I have doubts that even when Turkey might be supporting Ukraine politically and diplomatically that it would take any practical steps in case of Russian attacks on Ukrainian ports. I don’t see any kind of military leverage or deterrence, and this is a huge threat to Ukraine,” Gaber said.

Erdogan claimed on Wednesday that the sides were close to finalizing a deal. Bodnar shared his optimism, telling Al-Monitor, “I believe that we will see some kind of agreement as a result of combined mediation efforts by Turkey and the UN.”

No progress was announced, however, following today’s meeting between Cavusoglu and Lavrov on the sidelines of a G20 summit in Bali, Indonesia.

Russia’s Foreign Ministry said in a statement, “Mevlut Cavusoglu and Sergey Lavrov had a thorough exchange on international and regional affairs with particular emphasis on the situation in Ukraine.”

"The ministers expressed satisfaction with the dynamics of the political dialogue between our countries at the highest and high level in 2022. They confirmed their readiness to continue close contacts between the leadership of Russia and Türkiye, including in the face-to-face format," the statement said, using Turkey’s new official name.

Turkey’s state broadcaster TRT said Cavusoglu also spoke to his Ukrainian counterpart, Dmytro Kuleba, over the telephone earlier today to discuss the grain corridor and developments related to the Zhibek Zholy. There were no further details.