Turkey is being lobbied by the UK to discuss the safe shipping of Ukrainian grain due to looming global shortages but denies any has reached its ports. 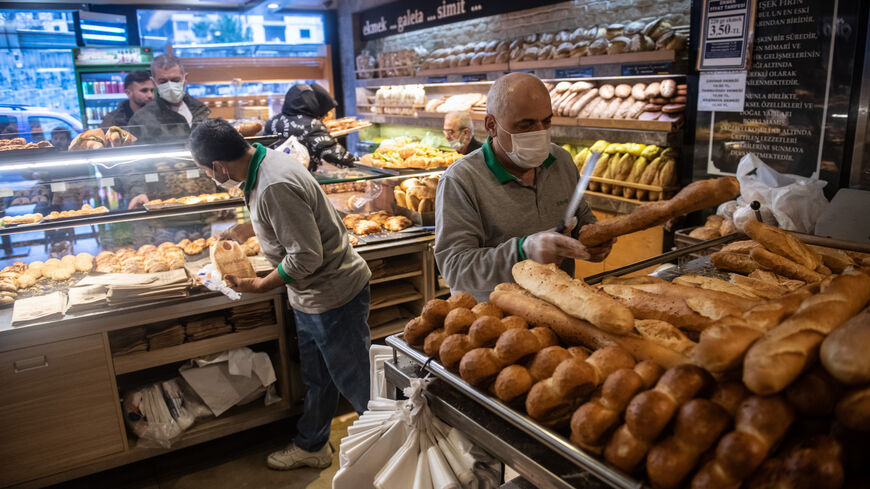 An employee packs bread at a bakery on March 23, 2022, in Istanbul, Turkey. In 2021 Turkey's wheat imports from Ukraine and Russia reached record levels. The Russian invasion of Ukraine is causing shortages of wheat worldwide and bread prices are rising in many countries. - Burak Kara/Getty Images

Turkey’s Foreign Minister Mevlut Cavusoglu said Turkey was investigating Ukraine’s claims that its grain has been stolen by Russia and sold to third countries via Turkish ports. “Turkey would never allow stolen Ukrainian grain to come to us."

He was referring to allegations made by Ukraine’s ambassador to Ankara, who said Turkish buyers were among those receiving grain looted by Russia in Ukraine. Vasyl Bodnar said earlier this month that his government had sought Ankara’s help to identify and capture individuals engaged in the illicit trade.

Cavusoglu insisted that ongoing probes had not uncovered any stolen shipments so far. But open-source intelligence reports suggest otherwise, with images of cargo vessels carrying wheat from Russian-occupied Crimea en route to Syria and then anchoring at Turkey’s Derince port.

Cavusoglu was speaking at a joint news conference with UK Foreign Secretary Liz Truss, who was in Ankara today. She and UK Defense Minister Ben Wallace flew in today to lobby Turkey on Sweden's and Finland’s NATO memberships and to discuss ways to ship Ukrainian grain safely from Odesa in the face of looming global food shortages as a result of Russia’s invasion of Ukraine.

The coastal shores around the port are heavily mined to prevent Russian ships from attacking the city. Turkey has proposed demining the area or to help navigate the safe passage of ships ostensibly based on information on the whereabouts of the mines, which Ukraine is probably refusing to provide. Russia is concerned that the ships docking at Ukrainian ports will unload weapons.

A Turkish military delegation met with Russian officials in Moscow yesterday to discuss a possible food corridor and the return of two Turkish airlines jets stranded at Kyiv’s Boryspil International Airport since February. Turkey's Defense Ministry said talks between the Turkish and Russian military delegations were “lengthy, positive and constructive."

The UK has offered to help with de-mining and providing insurance cover for a convoy of ships that would carry up to 20 million tons of Ukrainian grain under a UN plan designed to prevent mass famine in Africa.

Ukraine is one of the world’s largest producers of grain and has been unable to export any of it since the start of the conflict in February.

Turkey says negotiations with Russia and Ukraine are ongoing, but Cavusoglu conceded that he had failed to secure a date for a meeting between Ukraine and Russia. If an agreement is reached, Turkey is to set up a “control center” in Istanbul and demarcate a safe zone around Ukrainian ports, Cavusoglu added.

Yoruk Isik, an Istanbul-based geopolitical observer who tracks ships transiting the Bosporus Straits, said Russia is playing for time and Turkey’s “worthy efforts” to secure a grain deal will prove as futile as its attempts to secure a cease-fire between the Kremlin and Kyiv. “Russia, a country that views itself as equal to no other country than the United States, would not hand Turkey such a diplomatic prize,” Isik told Al-Monitor.