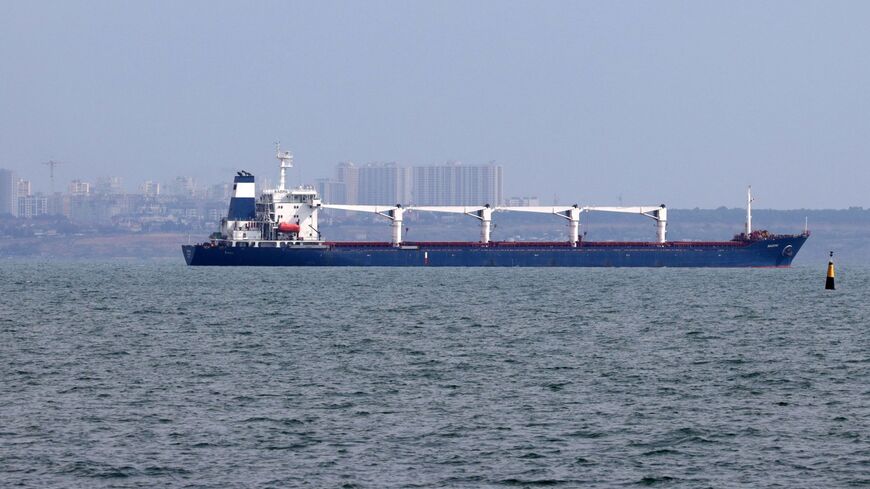 ISTANBUL — The first grain ship to leave Ukraine since the Russian invasion departed from the port of Odesa on Monday under a deal brokered by Turkey and the United Nations last month.

The apparent success of the July 22 agreement between Ukraine, Russia, Turkey and the UN raised Ankara’s standing on the world stage, as well as that of President Recep Tayyip Erdogan, according to analysts.

Facing an economic crisis and a looming election, the Turkish leader will welcome the positive media coverage that comes with playing such a central role in arranging a successful accord between the belligerent parties.

“The agreement is playing [in]to Erdogan’s hands,” said Kerim Has, a Turkish political analyst based in Moscow. “The major role of Turkey in securing the first agreement between the warring sides in Istanbul is important for Turkish prestige and for Erdogan personally.”

The Sierra Leone-registered cargo ship Razoni left Odesa with 26,000 tonnes of corn. “I believe that we will ensure global food security thanks to this important step,” Ukraine’s Ambassador to Ankara Vasyal Bodnar tweeted.

It will be inspected by a joint team of UN, Turkish, Russian and Ukrainian officials near Istanbul’s Bosporus strait on Tuesday, Turkish Defense Minister Hulusi Akar said. It is then due to head to the Lebanese port of Tripoli.

“This is a very pleasing and proud situation for us,” Akar told the state-run Anadolu news agency.

He said the framework drawn up by Erdogan, Russian President Vladimir Putin and Ukrainian President Volodymyr Zelenskyy created a “very wide working sphere” that allowed the shipments to go ahead.

In July, the IMF’s World Economic Outlook sounded the alarm on the global crisis and the impact of trade barriers, noting “the link between prices and social stability means that further barriers to trade, or a poor harvest due to extreme heat and fertilizer shortages, risk causing further hardship, famine or unrest." The IMF said such risks "could be allayed by easing logistic hurdles brought about by the invasion of Ukraine, including the Black Sea blockade.”

The Turkish Defense Ministry said other ships would pass through Black Sea safe corridors in the coming days. Ukrainian officials have said 17 ships are docked with almost 600,000 tonnes of cargo, mostly grain.

The shipment deal is expected to release some 22 million tonnes of grain held in Ukrainian silos and ease a growing global food crisis.

Turkish officials view the agreement as vindication of their stance as a mediator between Moscow and Kyiv. NATO member Turkey has good relations with both sides. It has not joined sanctions against Russia but at the same time has supplied Ukraine with weapons, particularly armed aerial drones.

“We hope this process will continue without interruptions and problems,” Turkish Foreign Minister Mevlut Cavusoglu tweeted after the Razoni departed. “We’ll do what is necessary to this end. We hope that the agreement will lead to a cease-fire and lasting peace.”

“I put a really low probability on this happening due to the obvious security concerns,” he said. “Turkish diplomats’ tenacity played no small part in making this happen. Let’s hope that this makes a meaningful step up in Ukrainian agro-food exports, helping alleviate pressure on global food markets, helping the world’s poor.”

Supporters of the Turkish government were quick to hail its role in finding a solution to the grain crisis.

“Turkey’s intense diplomatic efforts that continued day and night for six weeks paved the way for the signing of the ‘safe grain corridor’ agreement in Istanbul, on which the food security of 400 million people depends,” economist Kerem Alkin wrote in the Daily Sabah newspaper.

“Turkey’s understanding of strong, entrepreneurial and humanitarian diplomacy was once again in effect when creating a permanent solution for the global food supply crisis, which is the most critical crisis on the global scale. This achievement was congratulated by all leading G-20 and OECD member countries.”

Last month’s breakthrough allowed for an Istanbul control center staffed by personnel from the four parties to oversee grain exports from Ukraine’s ports in Odesa, Chornomorsk and Yuzhny.

The deal also allows Russia, which together with Ukraine accounts for nearly a third of global wheat exports, to export grain and fertilizers.

The departure of the Razoni is even more remarkable given continuing Russian missile attacks around Odesa following the finalization of the grain deal.

Volodymyr Sidenko, an expert with the Kyiv-based Razumkov Center think tank, told The Associated Press that the ship’s voyage was just a “first step that could also be the last if Russia decides to continue attacks in the south.”

However, Turkey’s role as an intermediary between Moscow and Kyiv, as well as the West, could prove valuable in the event of talks to bring an end to the war.

“When I talk with Western diplomats in Moscow, they say the fact that Turkey keeps an open channel with Russia is also important for NATO,” Has told Al-Monitor.

“If a peace deal will be reached, I am 99% certain it will be arranged in Istanbul with Turkey. The West can keep an open channel with Moscow, and this is something important to their interests.”