Why Turkey wants a permanent naval base in Northern Cyprus

With the heated atmosphere in the eastern Mediterranean because of the Syrian crisis and the rivalry over hydrocarbon reserves, Turkey’s desire to install a permanent naval base in Northern Cyprus is being debated. 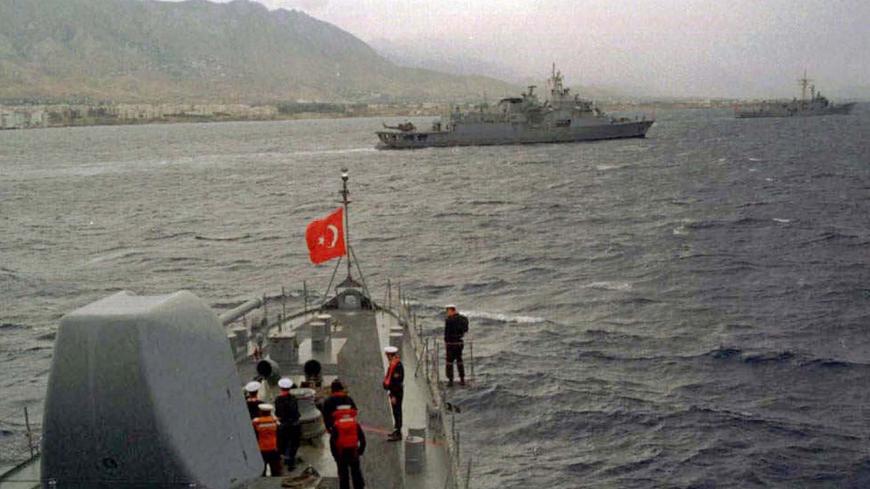 Ships from the Turkish navy head toward Kyrenia Port in Northern Cyprus, Nov. 18, 1998.

International waters of the eastern Mediterranean Sea are running out of free space and becoming more crowded with elements of the US 6th Fleet, a plethora of naval vessels with the Russian Mediterranean Task Force, UK submarines, French frigates and others. The crisis in Syria and rivalry over hydrocarbon reserves are the main causes of this unprecedented military naval concentration and activity.

Rising tensions and naval movements have rekindled the debate in Turkey on whether to set up a permanent naval base in the Turkish part of Cyprus (the Turkish Republic of Northern Cyprus, or Northern Cyprus). According to reports leaked to Turkish media, the Turkish navy has submitted a report and recommendation to the Ministry of Foreign Affairs on the urgent need to set up a naval base at an appropriate location there.

This particular operation conducted within the context of NATO’s Operation Active Endeavour provides constant patrolling by Turkish navy submarines, surface ships and planes in the Iskenderun Bay and south of Cyprus. At the moment, one submarine, one frigate and two patrol boats are carrying out surveillance east of the island. Moreover, a Turkish corvette is operating with UN forces in Lebanon to detect entry of banned weapons and equipment into Lebanese waters.

In order to not give up its initiative in the exclusive economic zone and allow a fait accompli on the continental shelf, Turkey has deployed a significant naval force of two submarines and 14 warships in the eastern Mediterranean for some time now.

This force is currently supported from the Iskenderun and Mersin ports. But the Turkish navy has to share these ports with civilian vessels, thus limiting the resupply, maintenance, repairs and support they can provide to the Turkish navy. The nearest main naval base is at Aksaz, which is on the southeast coast of the Aegean Sea in Marmaris.

Devrim Yaylali, a leading naval expert, believes the Turkish navy’s recommendation for a permanent naval base in Northern Cyprus is one of the most important geopolitical developments of recent times. Yaylali said, “Such a base in Northern Cyprus will provide significant facilities for the Turkish navy. Above all, the time required for travel of Turkish warships to operational zones will be shortened, thus [allowing them to] extend their stays in the zone. That is a major gain.” He added, “There are no floating maintenance and repair facilities for the Turkish navy in the eastern Mediterranean. To provide such facilities with a permanent base to be established will mean these vessels will not have to go to Aksaz at Marmaris or to shipyards such as Alaybey in Izmir for maintenance and repairs. Guzelyurt and Famagusta in Cyprus appear to be suitable for such a permanent base, as they are closer to operational zones of Turkish ships. They have good communication and transport infrastructure, and there are major cities nearby that can support the base. It is also important that a [permanent] base be protected against threats from land and air. There will definitely be Turkish submarines. We should also expect shorter-range corvettes, patrol, gunboats and a few frigates to be included in the new base.”

A notable Turkish naval historian and strategist says Europe and the United States have been striving to isolate Turkey in the eastern Mediterranean, and that the power struggles Turkey has engaged in with Russia on one hand and with Greek Cypriot, Israel, Greece and Egypt bloc on the other hand indicate that Ankara has to learn to survive on its own.

“There may be no military rationale to set up a naval base that is only 40 miles from our Iskenderun naval base, but geopolitical realities so require. At the moment, it is not decided whether the proposed base will be an operational or logistics one, or a sophisticated base with anti-access/area-denial (A2/AD) facilities. Naturally, the absence of technological and technical infrastructure in Cyprus to implement such a project will skyrocket the costs of setting up such a base,” he told Al-Monitor under condition of anonymity.

He continued, "If such a base is to be set up, I believe it will be off Famagusta. I am sure it is almost guaranteed that the Turkish navy to be deployed there will ensure area domination with high-quality G-class frigates with high seaworthiness, anti-aircraft warfare weapons, anti-submarine and anti-surface capabilities, and Ada class corvettes with reduced footprints. I wouldn’t be surprised if it will also include conventional submarines with a high level of deterrence."

Naval experts in Ankara believe setting up a naval base outside of Turkish borders will provide serious self-confidence not only to the Turkish navy but also to the entire Turkish Armed Forces.

In addition to the plans for a permanent naval base, Turkey is also considering reactivating a civilian airport currently out of use. The airport, located in Gecitkale, might be used to serve the needs of the Turkish military's activities in the Mediterranean. While this plan is being discussed, no action has been initiated yet.

What is clear is that Ankara — worried about Russian activities and the operations of the Greek, Greek Cypriot, Israeli and Egyptian bloc Russian understanding — will soon take some steps to defend what it deems to be its sovereign rights.

In turn, that will further escalate the current tensions in the eastern Mediterranean.