Regional crises and economic squabbles have led to a military buildup in the eastern Mediterranean that threatens to shift from feints and preparation to armed conflict as Russian and NATO forces further complicate the situation. 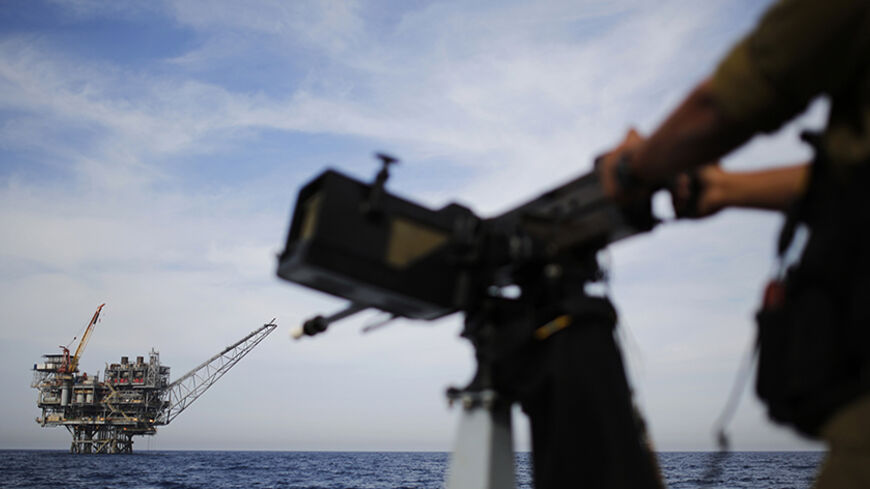 An Israeli gas platform is seen in the back as a sailor in the Israeli navy stands aboard a patrol boat in the Mediterranean, west of the port city of Ashdod, Feb. 25, 2013. - REUTERS/Amir Cohen

Recent moves by combat naval units in the international waters of the eastern Mediterranean Sea have conspicuously burgeoned, suggesting that the region is heating up. There are both regional and nonregional factors contributing to this worrisome trend.

The nonregional factor is the spilling over of the naval rivalry between Russia and NATO from the Black Sea to the Mediterranean in recent months.

As for the regional factors, the first is the Syrian crisis. Particularly since the beginning of US air attacks on Syria, many countries, notably Russia, have stepped up their reconnaissance and surveillance operations in the eastern Mediterranean usually described as “the gate of Middle East to Syria and the Mediterranean.”

Another cause of the increasing tension is the region's importance as a strategic junction of world trade. The inevitable naval presence in the region is to ensure the uninterrupted flow of free trade that sees 2,000 ships sailing in the region at any given moment and an annual traffic volume of 200,000 ships.

Finally, in recent years there has been growing realization that the eastern Mediterranean is not only a major energy corridor but also an area with its own rich oil and natural gas reserves. The region's total energy reserves equal 30 billion barrels of oil with an approximate market value of $1.5 trillion.

Countries that stake claims on the energy reserves of the region have decided that diplomacy backed by a show of military force will be more persuasive than diplomacy alone.

The latest energy reserve crisis in the region resulted from the exploration activities of Turkey’s research vessel Barbaros Hayrettin Pasa in the eastern Mediterranean that prompted a further increase in military moves. The ship, escorted by the Gelibolu and Giresun frigates of the Turkish navy, began a seismic exploration in the exclusive economic zone unilaterally declared by Greek Cypriots. The response from the Greek Cypriot-Israel-Greece bloc and Russia came quickly.

Between Oct. 20 and Oct. 23, the Russian, Israeli and Greek Cypriot navies conducted a joint naval exercise covering air defense, underwater attacks and anti-submarine operations and developed joint operational procedures. The Russian anti-submarine vessel Kulakov, the flagship of Russia's Mediterranean fleet, and Novorcherkassk, a landing vessel of Russia's Black Sea fleet, participated in these exercises, during which live rockets were fired.

NATO and Turkey were quick to respond. The low-profile "Blue Whale" exercise by a small Turkish naval element and a US logistics ship will be repeated with much larger participation Nov. 6-14.

Standing NATO Maritime Group-2 (SNMG-2), responsible for the Mediterranean, will participate with the USS Leyte Gulf, Germany's FGS Neidersachsen, Canada's HMCS Toronto, Spain's SPS Juan de Borbon and SPS Reina Sofia and Turkey's TCG Kemalreis. Besides SNMG-2, the Turkish navy will participate with three additional frigates, two corvettes, four submarines, one auxiliary vessel and many aircraft. The United States will also send its frigate the USS Cole, Britain will deploy its nuclear submarine HMS Torbay and Pakistan will sent its frigate PNS Alamgir. Interestingly, military observers from Bahrain, Bangladesh, Georgia, Lebanon and Chile will be present in the exercises that will focus on surface and underwater reconnaissance, surveillance and anti-submarine warfare.

The "Blue Whale" 2014 exercise, to be commanded by Adm. Cihat Yayci, the commander of the Turkish navy's Southern Task group, will have four phases. In the first, all naval elements will participate in preparatory meetings, news briefings, pre-sailing briefings and social activities at Turkey’s Aksaz naval base. In the second phase, naval reconnaissance, surveillance and submarine defense combat training will work to increase the interoperability of a multinational force. In the third phase, using scenarios to be provided by Exercise Operations Center, simulation games will test possible operational responses by NATO in the eastern Mediterranean. The fourth phase will be a port visit to Antalya Nov. 13-14.

Comparing the two exercises, it's notable that while the Russia-Israel-Greek Cypriot joint exercise focused on undersea warfare, NATO’s will focus on surface and underwater reconnaissance, surveillance and anti-submarine warfare. In short, while Russia is trying to develop its military capacity to operate in the eastern Mediterranean without being detected, NATO is working to develop ways to detect Russian moves in advance

Turkish military sources who spoke to Al-Monitor on condition of anonymity drew attention to several important points. They said that military activity in the eastern Mediterranean has increased to dangerous levels since October. It has become almost routine for warships of rival countries to try to force each other to alter their courses in international waters, send low-altitude flights over rival warships, instigate dog fights in the sky and lock weapons-guiding radar onto each other's vessels. All these point to heightened risks of clashes in the region.

To sum up, the Syrian crisis, the Israeli-Palestinian problem, the continuing division of Cyprus, disputes between Israel and Lebanon and between Turkey and Greek Cypriots on the exclusive economic zone and disagreements on resource rights in international waters are all heating up the eastern Mediterranean and jeopardizing the security of critical maritime trade routes. Regional rivalries over $1.5 trillion worth of hydrocarbon reserves is gradually militarizing the issue. The global competition between Russia, which wants to preserve its interests in the Mediterranean, and NATO, which wants to avoid a Ukraine-style fait accompli, are intensifying the conflict.

States with interest in the area each appear to consider the eastern Mediterranean "their waters" and will try to impose their views through both diplomatic and military moves.

One can only hope that the pilots of rival air forces and the captains of the warships that frequently encounter each other in the eastern Mediterranean will continue to be not only skilled professionals but also astute politicians with honed diplomatic skills.