Are the US and Turkey diverging over Syria policy? 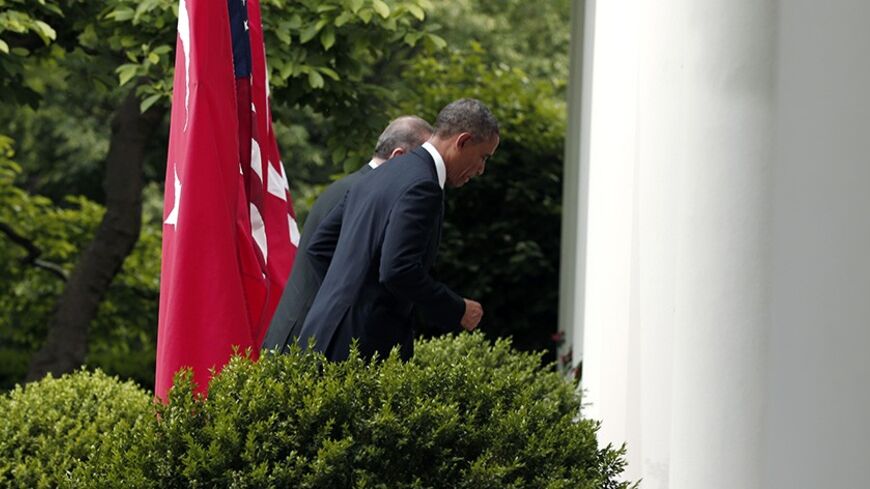 “An acclaimed American journalist has come under fire over his report suggesting Turkey was behind an August 21 chemical weapons attack in Syria that brought the United States to the brink of military action against Damascus.” Thus reads the lead of an April 9 Radio Free Europe/RadioLiberty (RFE/RL) report about “The Red Line and the Rat Line,” Seymour Hersh’s recent article in the London Review of Books, about which I have previously written in Al-Monitor.

It also states, “Analysts, meanwhile, have criticized the reliability of key sources and individuals in Hersh's story published recently in the 'London Review of Books,' while accusing him of ignoring evidence they say corroborates the U.S. position of the Assad regime's culpability.”

For me, this is more important than US and Turkish officials rejecting the claims in Hersh’s piece that Syrian rebels had carried out the Aug. 21 Ghouta assault with the aid of Turkish intelligence, with the intention of provoking Washington into launching strikes against Syrian President Bashar al-Assad's regime, as the attack represented a breach of the chemical weapons “red line” drawn by President Barack Obama. Some 1,000 people were killed in the assault.

Hersh, a Pulitzer Prize winner, stood by his reporting, as RFE/RL acknowledged, citing a “classified June 20 document issued by the U.S. Defense Intelligence Agency as saying that the Al-Qaeda-linked [Jabhat] Al-Nusra Front rebels in Syria maintained a sarin-gas production cell that constituted 'the most advanced sarin plot since al-Qaida’s pre-9/11 effort.'”

In Turkey, pro-government media outlets are frantically busy pointing out the “loopholes” in Hersh's piece, yet, as Al-Monitor contributor Barin Kayaoglu rightly underlines in “Syria allegations sink Turkish government morale,” “[I]rrespective of whether Hersh is right or wrong, … the claims in 'The Red Line and the Rat Line' will sharpen the paranoid attitude prevailing among Turkish decision-makers against the United States. More importantly, the assertions will worsen the morale of Turkish bureaucrats and their declining trust in their elected superiors.”

I could not agree more with this observation but must add that Hersh’s piece contains points largely unnoted but that nevertheless provide clues to the troubled status of Turkish-US relations. The following comments from the article should also be seen as shedding light on what stands at the core of the graft probe that was launched on Dec. 17 and has rocked the Erdogan government to its foundations:

Obama was still permitting Turkey to continue to exploit a loophole in a presidential executive order prohibiting the export of gold to Iran, part of the US sanctions regime against the country. In March 2012, responding to sanctions of Iranian banks by the EU, the SWIFT electronic payment system, which facilitates cross-border payments, expelled dozens of Iranian financial institutions, severely restricting the country’s ability to conduct international trade. The US followed with the executive order in July, but left what came to be known as a “golden loophole”: Gold shipments to private Iranian entities could continue. Turkey is a major purchaser of Iranian oil and gas, and it took advantage of the loophole by depositing its energy payments in Turkish lira in an Iranian account in Turkey; these funds were then used to purchase Turkish gold for export to confederates in Iran. Gold to the value of $13 billion reportedly entered Iran in this way between March 2012 and July 2013.

The program quickly became a cash cow for corrupt politicians and traders in Turkey, Iran and the United Arab Emirates. “The middlemen did what they always do,” the former intelligence official said. “Take 15%. The CIA had estimated that there was as much as $2 billion in skim. Gold and Turkish lira were sticking to fingers.” The illicit skimming flared into a public “gas for gold” scandal in Turkey in December, and resulted in charges against two dozen people, including prominent businessmen and relatives of government officials, as well as the resignations of three ministers, one of whom called for [Prime Minister Recep Tayyip] Erdogan to resign.”

On top of this, irrespective of whether Hersh’s assertions are true, in Turkey they have also raised the issue of the country’s al-Qaeda connections. This obviously must be a troublesome element in Turkish-US relations. Turkish leaders, in particular Erdogan and Foreign Minister Ahmet Davutoglu, become furious when such a link is brought up. If it comes from a Turk, he or she should be prepared to be labeled a traitor.

Turkish officials take pains to point out that Turkey has been targeted by al-Qaeda in the past, as devastating attacks in 2013 amply demonstrate. In addition, Turkey recently appeared on the brink of a military incursion, when the Islamic State of Iraq and al-Sham (ISIS), which long was associated with al-Qaeda, threatened to destroy the Tomb of Suleiman Shah, the grandfather of Osman I, the founder of the Ottoman Empire. The tomb sits near Raqqa, a northern Syrian provincial center under ISIS rule.

ISIS is not, however, the only organization with connections to al-Qaeda in Syria. There is also the al-Nusra Front (or Jabhat al-Nusra), which, unlike ISIS, has declared allegiance to Ayman al-Zawahri, who succeeded Osama bin Laden as leader of al-Qaeda. Turkish authorities had not until now denied Turkey’s alleged connection to Jabhat al-Nusra. The United States declared Jabhat al-Nusra a “terrorist organization” in December 2012, but Turkey refrained from doing the same. Moreover, Jabhat al-Nusra is closely allied with the Islamic Front, an umbrella group of Salafi jihadist rebel groups fighting both against the Assad regime and ISIS, which are hostile also to Turkey.

Syrian Kurds in the last months of 2012 alleged that they were clashing with Jabhat al-Nusra, at Ras al-Ain (Serekaniye in Kurdish), opposite the Turkish town of Ceylanpinar, and that Jabhat al-Nusra was getting its support from the Turkish side. More recently, the offensive that began in March in the Syrian province of Latakia — leading to the rebels' capture of the Syrian Armenian town of Kassab, right across the Turkish border — was a joint Jabhat al-Nusra/Islamic Front operation using Turkish soil. Nobody has denied this.

Turkey is definitely against the ISIS faction, which Zawahri says is no longer part of al-Qaeda. That said, is it also against al-Qaeda's Jabhat al-Nusra affiliate? Are Turkey’s connections and support to Jabhat al-Nusra and the allied Islamic Front in Syria, which have not been denied, endorsed by the United States? If not, will they emerge as omens of a problematic relationship between Erdogan’s Ankara and Obama’s Washington?

Hersh’s article, if it achieves nothing else, has led to such questions, and they are important questions.