Fears of jihadist blowback from the Syrian war are starting to be realized after Saudi's discovery of a terrorist cell planning attacks on its soil. 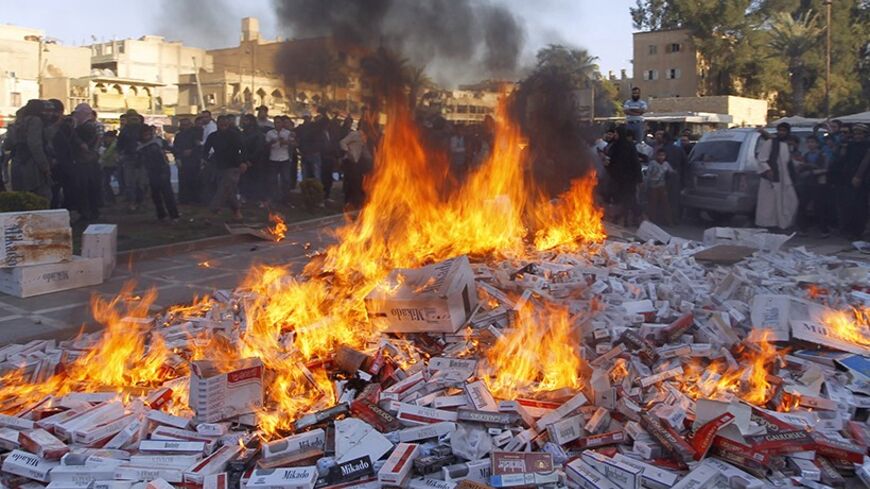 On May 6, the Saudi Interior Ministry announced the discovery of a jihadist group in Saudi Arabia linked to the so-called Islamic State of Iraq and al-Sham (ISIS). The newly discovered group sought to restart armed action in Saudi Arabia, and it was linked to ISIS in Syria and had contacts with al-Qaeda in Yemen. The group was collecting donations, coordinating the smuggling of individuals and weapons, and preparing to resume assassinations and bombings in Saudi Arabia, according to the ministry statement.

The statement clearly points to ISIS in Syria and its relationship to groups that are targeting Saudi internal security. This reveals Saudi concern about the growing and rising influence of al-Qaeda, in its multiple groupings, on the kingdom’s northern border with both Syria and Iraq, and on the southern border with Yemen. The Syrian and Yemeni fronts have become safe havens for al-Qaeda in its two conflicting branches: Jabhat al-Nusra and ISIS.

Meanwhile, Saudi policy in the two countries calls for supporting the transitional process. In Syria, this is done by supporting the so-called moderate military factions, which are not linked to al-Qaeda. In parallel with this strategy, Saudi policy wants to prevent the growth of influence of al-Qaeda and its affiliates and their acquiring safe havens from which they can threaten Saudi Arabia.

Abdullah al-Askar, chairman of the Foreign Affairs Committee in the Shura Council, told the newspaper Asharq Al-Awsat that one reason why al-Qaeda and similar groups have a growing influence is the political and security vacuum in a number of countries in the region, including Syria.

According to the Ministry of Interior's statement, the newly discovered group has 62 members, most of them Saudis. The group is establishing a smuggling network of individuals and weapons between Saudi Arabia and Yemen. Perhaps this is why the group chose to set up its headquarters in Abha in the southern part of the kingdom, near Yemen.

The director of Al-Arabiya TV in Saudi Arabia, Khalid al-Matrafi, revealed that among those assassinated by the group was a senior cleric in Riyadh. The phenomenon of targeting public figures is not new to Saudi Arabia, and in 2009, al-Qaeda in Yemen tried to assassinate the assistant minister of interior, Prince Muhammad bin Nayef.

Monitoring social media reveals that the armed conflict between Jabhat al-Nusra and ISIS in Syria has caused fractures between al-Qaeda supporters in other countries, including Saudi Arabia. This fracture will cause the emergence of a more radical and violent al-Qaeda current, via ISIS, whose supporters on social media do not hide their desire to move their operations and bombings to Saudi Arabia.

The newly discovered group in Saudi Arabia is the first group to be revealed to have ties with ISIS, which broke away from al-Qaeda in Syria and entered into a war against it. This war is ongoing despite the intervention of al-Qaeda’s leader, Ayman al-Zawahri.

So far, it is not clear whether ISIS established a new group in Saudi Arabia amid the conflict with the mother organization in Syria — Jabhat al-Nusra — to earn credit from the mother organization for fighting in the Arabian Peninsula. It is also not clear whether this will affect the cohesion of al-Qaeda in Yemen, especially in light of the Yemeni army’s war to expel al-Qaeda from its areas of influence.

In light of its struggle against Jabhat al-Nusra and jihadist Salafism for al-Qaeda’s legacy, ISIS may opt to conduct terrorist operations outside Syria.

Saudi Arabia announcing that it uncovered an ISIS group on its soil reveals the features of Saudi policy toward Syria, especially after the talk that Syria’s file is in the hands of Saudi Interior Minister Prince Muhammad bin Nayef, who is also playing a key role in the fight against al-Qaeda in Yemen.

The new Saudi policy is moving on two parallel lines: The first is to fight al-Qaeda and its organizations, and the second is to support the moderate military factions that are not linked to al-Qaeda, to push the Syrian regime to accept the transition of power process. Combining these two strategies is not easy, especially since the moderate factions in Syria are no more moderate than the Muslim Brotherhood, which the Saudi government has designated a terrorist group like al-Qaeda and Jabhat al-Nusra.