An article by Seymour Hersh is putting the spotlight on Turkey’s alleged support for the al-Qaeda-affiliated Jabhat al-Nusra fighting the Syrian government. 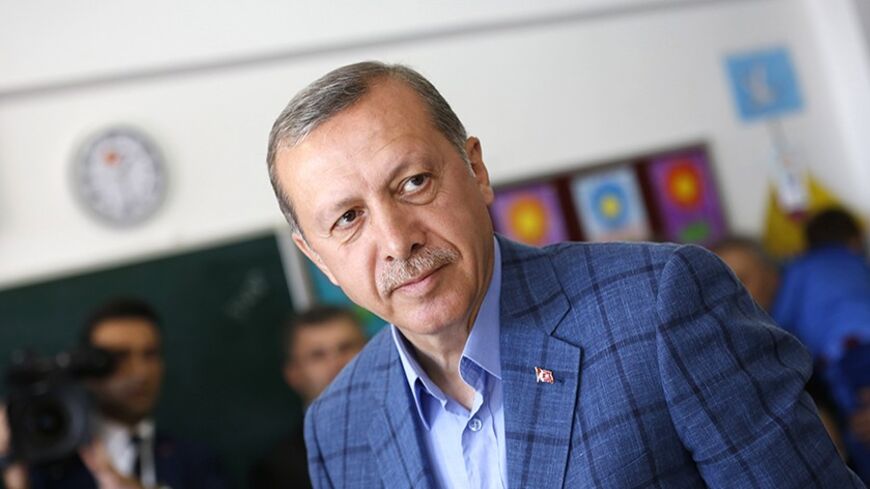 If the article hadn't had a Seymour Hersh byline, it wouldn’t have dropped like a bomb in Turkey, despite all the upheaval and polarization there over Syria.

“The Red Line and the Rat Line,” published in the London Review of Books, alleges that the source of the sarin gas used against the Ghouta suburb of Damascus on Aug. 21, 2013, was Prime Minister Recep Tayyip Erdogan. According to the piece, Erdogan arranged supplies of the gas to jihadist groups to create the impression that the gas was used by the regime of President Bashar al-Assad and to goad US President Barack Obama into military intervention in Syria.

It is a sensational piece of writing for lovers of conspiracies. Interestingly enough, the number-one subscriber to conspiracy theory in Turkey is Erdogan himself and his close associates. It is as if Hersh’s piece, which surely sounds like a top-rate conspiracy theory, boomeranged and smashed back into Erdogan and his Syria policy.

Claire Berlinski, a resident of Istanbul, Manhattan Institute scholar and biographer of the late Margaret Thatcher, tweeted on Hersh’s piece: “I’m no great fan of [Erdogan]'s Syria policy, but if you think he launched a Sarin attack on Syria's civilian population, you're losing the plot.”

Before I read my good old friend and colleague’s London Review piece (and before it exploded in Turkey’s already dizzying daily political life), I wholly shared Berlinski’s take on the matter. However, the byline of Seymour Hersh merits a moment of pause and reflection.

Seymour “Sy” Hersh is an investigative reporter based in Washington who gained worldwide recognition in 1969 for exposing the My Lai massacre in Vietnam. For his reporting of the Vietnam War, he received the 1970 Pulitzer Prize. His reports on the US military’s mistreatment of detainees at Abu Ghraib prison gained much attention as well, landing him the 2004 George Orwell award. He is recipient of too many journalism awards for the spatial limits of this article.

I have known him personally for more than a decade as the enfant terrible of journalism for American authorities in Washington. He hated the neoconservatives, arch-conservatives and American nationalists in the US administrations and was hated by them in turn. Yet, he had reliable sources of information in the top echelons of the American military establishment and Western intelligence community, so what he wrote was considered credible or at least taken seriously.

I was in Tehran when one of his bombshells at The New Yorker, “The Iran Plans,” was published on April 17, 2006. I witnessed myself the impact it made in Iran and on Iranian decision-makers. On my return, I found Sy in Istanbul to share my Tehran impressions, and he was generous enough to give me the details of the sources on which his story had depended.

Therefore, anything that comes from Hersh is received seriously. Although The New Yorker and The Washington Post declined to publish “The Red Line and the Rat Line,” The London Review of Books, an equally prestigious venue, decided to run it as a serious and important piece.

He does not spare the Democratic White House from his damaging allegations. In this latest article, Obama was targeted along with Erdogan. The most incriminating part of Hersh's piece starts:

“For months there had been acute concern among senior military leaders and the intelligence community about the role in the war of Syria’s neighbors, especially Turkey. Erdogan was known to be supporting [Jabhat al-Nusra] … as well as other Islamist rebel groups. ‘We knew there were some in the Turkish government,’ a former senior US intelligence official, who has access to current intelligence, told me, ‘who believed they could get Assad’s nuts in a vice by dabbling with a sarin attack inside Syria — and forcing Obama to make good on his red-line threat.’ "

The article really gets damning when it addresses the sarin gas attack at Ghouta.

“We now know it was a covert action planned by Erdogan’s people to push Obama over the red line," Hersh quoted the former intelligence official as saying. "They had to escalate to a gas attack in or near Damascus when the UN inspectors … were there. The deal was to do something spectacular. Our senior military officers have been told by the DIA and other intelligence assets that the sarin was supplied through Turkey — that it could only have gotten there with Turkish support. The Turks also provided the training in producing the sarin and handling it."

Hersh concluded, “Barring a major change in policy by Obama, Turkey’s meddling in the Syrian civil war is likely to go on. ‘I asked my colleagues if there was any way to stop Erdogan’s continued support for the rebels, especially now that it’s going so wrong,’ the former intelligence official told me. 'We could go public if it was somebody other than Erdogan, but Turkey is a special case. … They can’t live with us if we take any active role against Turkish interests. If we went public with what we know about Erdogan’s role with the gas, it’d be disastrous.'"

Even after such excerpts, I still tend to stick to my opinion that believing in such a role for Erdogan in the sarin gas attack at Ghouta is losing the plot.

Nonetheless, after Hersh’s piece, Turkey’s alleged relations with groups like Jabhat al-Nusra and other jihadist Islamist insurgent groups will be under even greater international scrutiny, and perhaps the United States will think harder about providing armed assistance to the Syrian opposition via Turkey.

After the publication of Hersh’s piece, claims that Erdogan’s Syria policy is in jeopardy should not be dismissed as exaggeration.