A slew of allegations that Turkey may have been seeking to provoke a military intervention in Syria, even if untrue, have depressed morale among Turkish bureaucrats. 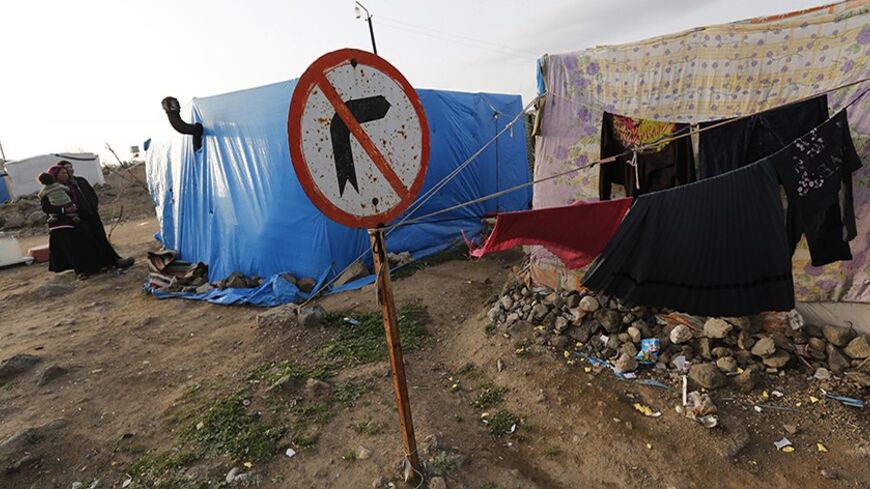 A traffic sign stands outside the Kilis refugee camp on the Turkish-Syrian border, March 17, 2014. - REUTERS/Murad Sezer

As Al-Monitor columnist Cengiz Candar pointed out on April 7, if it wasn’t for the prestigious byline, few people would have noticed the London Review of Books article by the veteran journalist Seymour Hersh. In Hersh's April 6 article, he alleges that the government of Prime Minister Recep Tayyip Erdogan aided and abetted the chemical attacks that killed more than 1,000 civilians in the Ghouta suburb of Damascus in August 2013. According to Hersh, an al-Qaeda-affiliated rebel group carried out the attacks, not the Assad regime. It was a testament to the gravity of the issue that even Turkey’s cowering media outlets talked about it.

Irrespective of whether Hersh is right or wrong, the telephone interviews that this author has had with several Turkish bureaucrats since April 7 suggest that the claims in “The Red Line and the Rat Line” (which I hope are not true) will sharpen the paranoid attitude prevailing among Turkish decision-makers against the United States. More importantly, the assertions will worsen the morale of Turkish bureaucrats and their declining trust in their elected superiors.

For one thing, the Hersh piece comes at a very bad time for the Erdogan government. One Turkish diplomat in Ankara, who spoke to Al-Monitor on the condition of anonymity, went to some length to explain why the allegations troubled his superiors: “We’re in deep s*** if our American counterparts think that we went so far as to use chemical weapons in Syria to blame it on Assad.” The diplomat continued, “I don’t think that’s the case — that the Americans think we’re behind the chemical attacks [in Ghouta] — but when you combine that [Hersh] article with the recent leaks alleging that our government is trying to start a war in Syria, it looks bad.”

“I sometimes wonder,” the middle-aged diplomat jokingly added, “if someone somewhere is not trying to get us into a war with the United States and Syria at the same time.”

I asked my diplomat friend whether, given Erdogan’s increasingly hostile stance toward the United States, which he implicitly accuses of enabling the Fethullah Gulen group, the Hersh piece won’t put additional strains on US-Turkish relations. “Absolutely,” he exclaimed. “Things will only get worse before they get better.” He added, “But, long after these politicians are gone, it’s going to be mid-level people like me who’re going to clean up the mess.”

I also spoke to an army colonel who shared his views with Al-Monitor on condition of anonymity. The colonel preferred not to address the Hersh piece directly — although he did call it “crazy” to think that the Turkish state would hand over chemical weapons to al-Qaeda to make the Assad regime look bad. The colonel then moved on to something closer to his heart: “We want to avoid getting entangled in Syria, right? Our [the Turkish military’s] biggest problem is that we’ve disbanded much of the assets that would have helped us to that end.” The aging soldier, who twice served two-year tours in southeast Turkey fighting the Kurdistan Workers Party (PKK) in the 1990s and a subsequent two-year appointment in the Turkish General Staff’s psychological operations units, was talking about the purges in the Turkish armed forces — the famous Ergenekon and Balyoz cases. “When Ergenekon and Balyoz first came to light,” he said, “the AKP [Justice and Development Party] government forced us to cease our ‘psy-ops’ at home and abroad.”

He continued, "At the time, we kept a close watch on Fethullah Gulen’s followers at home and abroad, and the AKP punished us for it." The officer then lamented, "Now, we are told that Gulen’s followers are the enemies of the Turkish state and that they are leaking state secrets." Even over the phone, the soldier’s frustration was palpable.

These exchanges reveal a belief shared by many bureaucrats in Turkey’s national security and foreign policy apparatus: that the Erdogan government’s interconnected problems regarding the Gulen group, the leaks and Syria are self-inflicted. The leaked tapes of March 27 were quite illuminating in that respect. In the recording that allegedly features Foreign Minister Ahmet Davutoglu, his undersecretary, Ambassador Feridun Sinirlioglu, Vice Chairman of the General Staff Yasar Guler and National Intelligence Organization chief Hakan Fidan, these Turkish officials complain about how their policies “are not integrated” and how they “cannot coordinate.” At one point, Fidan discusses how a pre-emptive attack against al-Qaeda in Syria could lead “to the explosion of many bombs inside Turkey” because “the border [with Syria] is not under control.” The conversation then turns into a series of lamentations of what Turkey would/should/could have done when the Syrian civil war started in 2011. Davutoglu suggests that Ankara should have “deployed special forces units” and “trained those guys [Syrian fighters] over there.” Ambassador Sinirlioglu, who claims to have been part of the discussions when Turkey sent military units to pursue PKK militants in northern Iraq in the 1990s and 2000s, wonders why Ankara can’t do the same thing with Syria today.

It may have been refreshing to see that such high-level officials are prone to human flaws — if the problem was not so consequential to Turkey’s well-being. While the March 27 tapes reveal the dysfunctional state of foreign and security policymaking in the Erdogan administration, it is obvious that the mid-level and junior bureaucrats who have to implement their superiors’ faults are not too happy about their lot. Perhaps Hersh gave too much credit to the Turkish government.