The “Justice March” of Turkey’s main opposition leader Kemal Kilicdaroglu spawned a unique togetherness between disparate groups, but will this spontaneous coalition last? 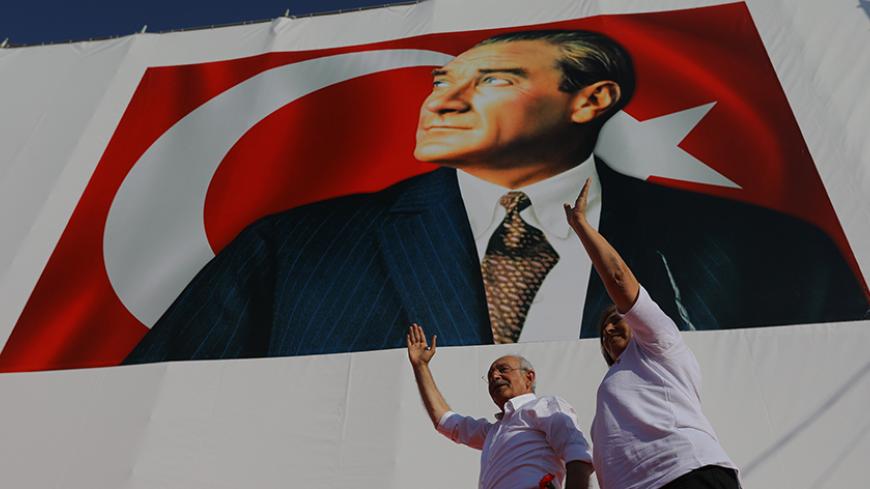 Kemal Kilicdaroglu, the leader of main opposition Republican People's Party, and his wife Selvi greet people during a rally to mark the end of his 25-day protest, dubbed the "Justice March," against the detention of the party's lawmaker Enis Berberoglu, in Istanbul, Turkey, July 9, 2017. - REUTERS/Huseyin Aldemir

On July 9, the head of Turkey’s main opposition Republican People’s Party (CHP), Kemal Kilicdaroglu, completed a 25-day “Justice March” from Ankara to Istanbul, marking one of the most memorable protests in Turkey’s political history. The 420-kilometer (260-mile) trek, meant to denounce the government’s crackdown on the opposition and call for a return to democracy, drew comparisons to Gandhi’s 390-kilometer Salt March, a milestone in India’s independence struggle, with Kilicdaroglu’s soft-spoken nature and physical resemblance to Gandhi reinforcing the association. More importantly, however, the CHP leader’s march set a milestone of its own, bringing together disparate groups from Turkey’s fractured opposition, which, many believed, could never happen.

The march culminated with a rally in Istanbul’s Maltepe district, with a huge crowd packing the vast meeting area. Many people could not even enter the venue. It was hard to tell what groups the participants represented, as they heeded Kilicdaroglu’s call to avoid displaying political symbols and brandish only the march’s hallmark “Justice” banner and the national flag. Only the presence of familiar faces and the statements made to the press demonstrated the diverse political quarters the rally attracted. They included socialist parties and groups that have traditionally sniffed at CHP policies, as well as trade unions and various civic society groups. The Peoples’ Democratic Party (HDP) — Turkey’s main Kurdish political movement and a frequent critic of the CHP on the Kurdish question — was also there. The participants, however, were not limited to the left. Disgruntled co-founders and former lawmakers of the governing Justice and Development Party (AKP) as well as estranged figures from the Nationalist Action Party, a critic-turned-ally of the AKP, were among the most attention-grabbing faces in the crowd. The CHP’s own Kemalist base, which few had imagined would stand side by side with those quarters, was also present in force.

Institutional identities aside, the ordinary Turks flocking to the rally were equally diverse. Among others, Al-Monitor came across women wearing Islamic headscarves and black chadors, a group the AKP has often portrayed as the victim of CHP oppression in the past.

The bulk of the crowd was made up of people over the age of 50, the same group that joined Kilicdaroglu in big numbers during the march. As noted previously in Al-Monitor, they were predominantly people seeking justice for their adult children who were imprisoned or left jobless in the massive purges after the coup attempt. The symbolic face in this group was, no doubt, 65-year-old Veysel Kilic, who never left the CHP leader’s side during the trek. Both his attire and remarks to the press revealed a deeply religious person who marched to demand freedom for his son, one of the jailed cadets who had been commandeered to the Bosporus Bridge on the night of the putsch, unaware of what was actually transpiring. Kilic burst into tears as Kilicdaroglu thanked him personally in the poignant speech he made at the rally.

In remarks to Al-Monitor, Kilic expressed deep disappointment with the AKP, the party he used to support, convinced that his son was innocent and unjustly jailed. “They just tossed us to the garbage,” he said, reflecting a sentiment prevailing among many ordinary Turks affected by the crackdown after the putsch. Then, pointing to the crowd, he said, “Those people took us out of the garbage and gave us back our dignity. Even death is no worry to me now.”

The rally often resembled a colorful carnival, as some came with pets to highlight animal rights, while others played saxophone and beat drums. Famous Turkish musicians, singing songs for freedom and democracy, further lifted everyone’s spirits. In the front rows, CHP lawmakers, who are often scorned by the AKP as being elitists detached from the people, sang along and kept time on bare feet — swollen, blue and bloodied from the 25-day march.

The defiant energy at the rally reverberated so strongly that AKP quarters set out to play it down in chorus. The number of participants became the primary focus of their effort, with prominent figures alleging that the rally had attracted less than 100,000. Even the office of the Istanbul governor chimed in with a midnight statement claiming an attendance of 175,000 people, even though President Recep Tayyip Erdogan himself had previously described the venue as one that has a capacity of 2 million people. Based on surface area measurements, the independent Topographical Engineers Chamber said that 1.6 million people were present, an estimate seen as the most credible so far.

The reason why the size of the rally became so important lies in the unique character of the crowd it attracted. By bringing together Kemalists, socialists, Kurds, disgruntled conservatives and Islamists, the rally upended a widely held conviction that those groups could never join hands. The rally may have marked the end of Kilicdaroglu’s march, but it could prove to be the starting point of political alliances to counter the AKP.

Indeed, the rally has galvanized CHP headquarters. Party members are pondering strategies to keep this spontaneous coalition intact and beef it up ahead of the 2019 presidential election. HDP co-chair Serpil Kemalbay has already sent a positive signal, saying that parties could come together around shared principles.

For the AKP, this is certainly an alarming prospect, as the party’s 15-year rule owes much to the scattered opposition, among other factors. The government may continue to belittle and shrug off the opposition, but Kilic’s brief detention the day after the rally seemed to manifest its covert concerns over a potential coalition.

The onus is now on the CHP. A smart political strategy sustaining the Maltepe coalition could give Erdogan a hard time in the 2019 presidential race.