Why Erdogan is unhappy with return of nationalist student oath

After the Turkish judiciary announced it would be bringing back a nationalist school oath done away with in 2013, President Erdogan has seized on the opportunity to benefit him in several political battles. 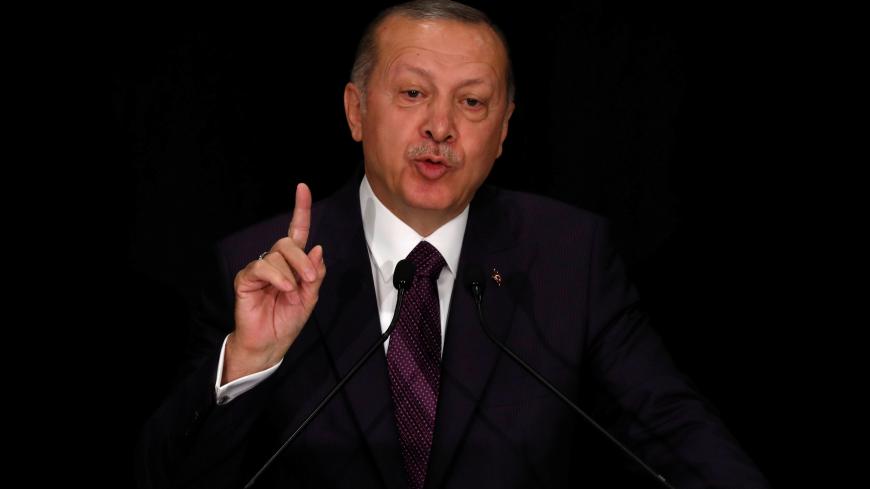 Turkey’s highest administrative court, the Council of State, announced Oct. 18 that the student oath will be reinstated at all primary schools. The student oath has been a controversial issue in Turkish politics for decades. In 1933, Minister of Education Resit Galip introduced the oath, which starts by declaring “I am a Turk” and ends with the statement “How proud is the one who can say ‘I am a Turk!’”

In September 2013, right after the Gezi protests and as part of the democratization package, Recep Tayyip Erdogan announced the “nationalist” oath would be removed. At the time, Erdogan said, “Lining up kids every morning and making them chant slogans from the 1930s, the Cold War and the era of the Iron Curtain is not nationalism.”

The announcement to reinstate the student oath rekindled the existing lines of division between Erdogan’s Justice and Development Party (AKP) and its unofficial ally the ultra-nationalist Grey Wolves — the youth branch of the Nationalist Movement Party (MHP). Interestingly, it was revealed that the court’s decision to reinstate the oath was made in April, but it was not conveyed to the government until Oct. 10. Al-Monitor asked prominent politicians in Ankara, and all concurred that they believed Erdogan knew the decision and delayed its announcement till now. Speaking at the court’s annual assembly on Oct. 24, Erdogan lambasted them about their decision. He emphasized the time lapse — five years — and angrily asked, “You thought about it now?”

Erdogan warned against the dangers of juristocracy — the judiciary overstepping its limits — saying, “Then let the judiciary to take over the executive branch as well.” He reiterated multiple times that the judiciary isn’t the place to make a decision, but it should act as a consultative institution. He said, “If the judiciary is convinced it is the decision-making body, then why I am standing here. Especially if before preparing the presidency executive orders, we are required to seek permission from the court, then I should not stay in this position. I should pack and leave.”

Since the decision on the student oath was announced in mid-October, almost every day either a nongovernmental organization related to education or a politician made public comments about it, keeping it in the spotlight. Kemal Kilicdaroglu, the leader of the main opposition, left-leaning Republican People’s Party (CHP), told the press Nov. 1 that he is convinced Erdogan will get his way in regards to eliminating the oath from the schools. The appeals process has already started to reverse the court’s decision, and the Ministry of Education has not granted permission to schools to recite the oath again.

Erdogan said Nov. 4, “[The court’s] decision [to reinstate] the oath has bad intentions. The events we witnessed after the court’s decision made us even more determined to oppose the oath. This oath is the creation of those who advocated for the call to prayer to be recited in Turkish. Our oath is the national anthem.”

Erdogan is certainly enjoying fanning the flames of this debate and is indeed winning at least three battles in the process.

Smooth breakup with ultra-nationalists for the March 2019 municipal elections

The debate over the student oath also coincided with the fallout between Erdogan and ultranationalist MHP. Their alliance has been working rather well since the July 15, 2016, coup attempt. The unofficial alliance has allowed the MHP to criticize the government from time to time as a party in opposition, while also allowing them to reap the benefits of being a part of the administration. It is understandable that Erdogan would not want the court’s decision on the oath to be revealed in April, right before the election, where ultra-nationalist votes were critical for this victory of the presidency. Yet now securely settled into the presidency, Erdogan understands well that for March 2019, a municipal elections alliance with the MHP is not that lucrative. For instance, before the collapse of the alliance idea, MHP leader Devlet Bahceli had announced that he would not nominate any candidates from Istanbul but would instead endorse the AKP candidate in return for other cities to do the same. This was a no-go for Erdogan.

There were other issues that escalated the MHP-AKP rift, but the oath provided Erdogan a strong justification to use Islam as a shield while breaking up with the ultra-nationalists. On Oct. 23, Erdogan told the Turkish parliament repeatedly, “I am a Turk, but I have to say I am not a Turkish ultra-nationalist. They are different. Racism is banned in our religion. It doesn’t exist.” Understanding the right-wing alliance with the MHP will not be beneficial for its party, Erdogan had to distance himself from the MHP without upsetting its own base. The AKP and the MHP share a portion of the voter base. Erdogan utilized the Islam card by embracing all Muslims, and he acted shrewdly before the presidential elections by embracing nationalism while afterward relaxing one condition after another — such as paid exemption from military service.

A senior AKP official from the security establishment told Al-Monitor on condition of anonymity, “The competition for government jobs is intense. AKP elites are bitter that MHP groups are getting bigger shares. The state cadres are being restructured, and the Grey Wolves are taking over the places of the Gulen members. This move is a juggling act by Erdogan; he oscillates between pious Muslims and dedicated militaristic ultra-nationalists.”

Although initially there were questions whether Erdogan is indeed trying to approach Kurdish voters, there is not sufficient reason to hope. Pervin Buldan, the chairwoman of the pro-Kurdish People’s Democratic Party (HDP), said, “Erdogan is winking to the Kurdish voters with this oath discussion, but Kurds are not going to be fooled.” Erdogan has already replaced all HDP-affiliated mayors by appointed government personnel in the majority Kurdish municipalities. His only target audience may be pious Kurds in these regions who are not aligned with the HDP, but their numbers are not sufficient to win a majority in these areas.

Rather, Erdogan’s escalation of the student oath issue serves the purpose to generate a wedge between two left-wing opposition parties: the HDP and the CHP. Both reacted cautiously.

The CHP replied that it was mainly going to focus on the hypocrisy of Erdogan’s statement. For instance, Kilicdaroglu emphasized that the Turkish national anthem that Erdogan praised also mentions “brave race.” Hence, to claim that the student oath would be racist is not accurate. Yet Erdogan focuses on Kilicdaroglu, avoiding deliberately to name the MHP and Bahceli when it comes to directing criticisms against the oath.

Through his resistance against the court’s decision, Erdogan is flexing his muscles one more time in the public sphere. In the last 16 years, Erdogan’s dismantling of the democratic process has been slow and evasive.

He has undermined democracy in a series of incremental steps where he almost always appears in the public eye to be the defender of some sort of justifiable cause. It was under Erdogan’s rule in which signs stating “How proud is the one who calls himself a Turk” in Diyarbakir were removed. It was also during his rule that Kurdish signs were replaced with Turkish ones. Arbitrary acts have become the norm in this system.

In this patronage-driven and nepotistically organized state structure, there are no officials left to resist Erdogan’s political power. The judiciary, as a non-elected institution, is not an independent branch. For instance, the head of the highest administrative court's daughter, another justice, is serving at the Palace. As Erdogan explained, the judiciary is there to consult with when and if need be. But it is one that should act in sync with the president.

If the appeals process goes as Erdogan wishes, it will certify for good that all institutions are under Erdogan’s command. The battle will no longer be about the student oath.