Many journalists lost their jobs and suffered from police violence following the shifting of Prime Minister Erdogan’s hard-line reactions to media freedoms. 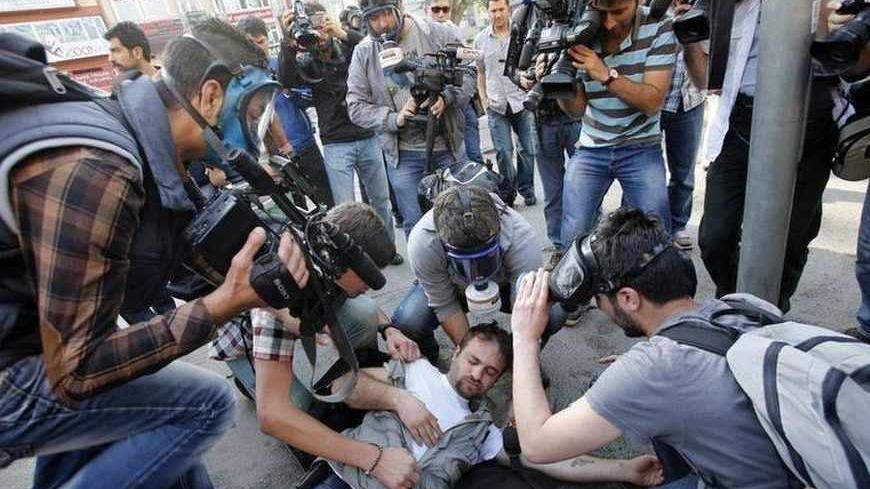 An injured journalist is filmed and helped by his colleagues during clashes between riot police and May Day protesters in central Istanbul, May 1, 2013. - REUTERS/Murad Sezer

Turkish journalists have become victims of Prime Minister Recep Tayyip Erdogan’s hard-line reactions to the Gezi Park resistance that erupted as a societal explosion after the May 31 police intervention and that spread to the whole country. Erdogan chose to see the Gezi Park movement — which has lost its scope and intensity of the June events but whose effects and ramifications will continue — as an international plot spearheaded by the “high interest-rate lobby” that seeks to topple him.

The prime minister built his policy on an approach that criminalized the Gezi opposition. He tried to unite his followers around himself by sticking to this narrative and with it he silenced some critical voices from inside his party. Erdogan must have thought that his polarization policy based on charges of an “international plot” had provided him with an opportunity to exert even more pressure on journalists — hence the expanding of already substantive press freedom gap in the country.

According to a July 25 statement from the Press Institute Association, which comprises the Turkish National Committee of the Vienna-based International Press Institute (IPI), since the beginning of the Gezi Park protests —  as a result of the oppressive atmosphere formulated by the government — dozens  of journalists were fired from their jobs, some were sent off on compulsory leaves and some resigned. Many journalists reporting the events were subjected to police violence, and some were hurt and detained.

The latest example of journalists who were fired was the ombudsman of the pro-government daily Sabah and Al-Monitor writer Yavuz Baydar. On June 15 after the expulsion of the protesters from Gezi Park by a harsh police action, his newspaper came out with a front-page banner headline, “Good morning, Gezi,” which praised the police action, Baydar criticized this report by quoting readers’ complaints. But his article was censored, was not printed and Baydar departed on compulsory leave. Then it was reported that Baydar’s article of July 22, which was supposed to appear after this return from leave, was also spiked. He was then fired.

The statement of the Press Institute Association cited examples of police violence used against journalists following the Gezi Park events. Photographs used by the international media showing 13 wounded journalists on July 6 were but one of them.

According to a report of the Photography Foundation, 111 press photographers were detained, subjected to violence and their work destroyed in Istanbul and Ankara between May 31 and July 8.

The Freedom for Journalists Platform that was formed in 2010 by more than 90 local and national media organizations organized an international conference in Istanbul on July 24 to deal with the oppressive measures and increasingly felt self-censorship that significantly targeted freedom of press after the Gezi Park protests.

The final communiqué of the “Freedom for Journalists Congress” said this about self-censorship:

"The Gezi Park protests demonstrated once again how the collusion of the government with some media bosses and pressures on some other media owners have made media organs unable to report news. The Congress emphasized how this situation has become the single most important cause of self-censorship that is paralyzing journalism in Turkey and called on the government and the media bosses to take the necessary steps to ensure editorial independence.”

Dunja Mijatovic, the media freedoms representative of the Organization for Security and Cooperation in Europe, said in a video message to the conference: "It is enough to look at the events in the last two months to see how serious the situation is in Turkey: In this period, we saw journalists threatened, beaten, severely injured, harassed, their equipment confiscated, convicted of defamation, sentenced to prison for terrorism charges."

Journalists — who, by the nature of their profession, maintain their distance from the government and criticize it — suffered job losses and  silencing, including being essentially forced into self-censorship. Detentions and police violence inflicted on reporters as a result of the Gezi Park protests coverage, while important issues in themselves, still must not detract from the importance of the “journalists in prisons” issue.

The report on imprisoned journalists issued by the main opposition Republican Peoples’ Party, CHP, on July 22 says there are 64 journalists in prisons. The majority of these journalists are from Kurdish media and they are being tried on charges of “membership in terror organizations.”

Turkey is the No. 1 prison for journalists in the world and at the center of the issue of press freedom in the country is the threat of imprisonment against journalists.

I am concluding with a quotation from the speech of the IPI Senior Press Freedom Consultant Steven Ellis at the Istanbul Congress of Freedom for Journalists:

"I argue that a state that cannot bear any scrutiny or acknowledge any misstep, that cannot look in the mirror and say, 'We can do better and we must do better,' is the greatest threat to its own long-term survival."