A Turkish newspaper’s censorship of its own ombudsman rings alarm bells over the issue of press freedom in Turkey. 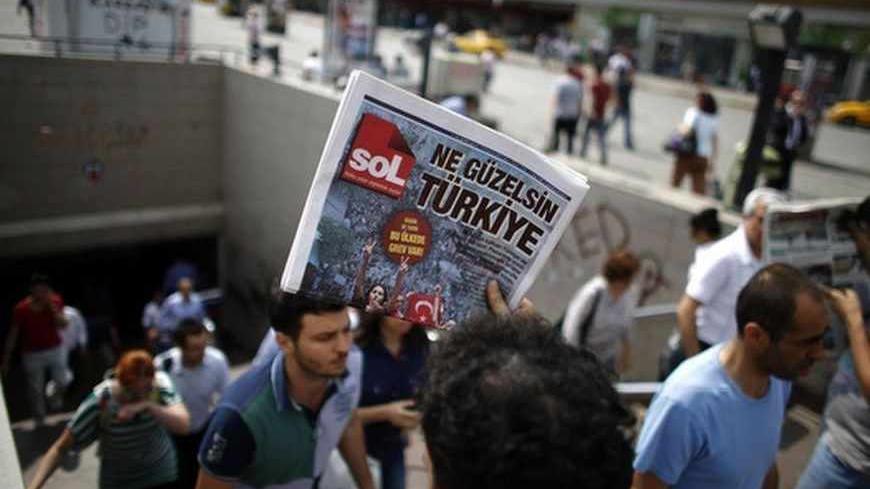 A man sells newspapers to people as they leave the subway station at Taksim Square in Istanbul, June 4, 2013. The headline reads, "What a beautiful Turkey." - REUTERS/Stoyan Nenov

Each time a political crisis embarrasses Turkey’s government, the noose around the freedom of the Turkish press gets a bit tighter.

In February, the daily Milliyet faced Prime Minister Recep Tayyip Erdogan’s wrath when it published the minutes of a meeting between three parliament members and Kurdistan Workers Party (PKK) leader Abdullah Ocalan on the prison island of Imrali, held as part of Ankara’s Kurdish peace drive.

Milliyet initially defended its publication of the minutes as an act of journalism. “Down with your journalism,” Erdogan responded, raising his criticism to a bullying tone. As a result, Milliyet, one of Turkey’s oldest newspapers, censored an article by its chief columnist Hasan Cemal, one of Turkey’s most popular and respected journalists, which defended the newspaper’s stance in the row. Cemal eventually quit and began writing for T24, an Internet news site published by a handful of leftist and liberal intellectuals.

The protests that erupted on May 31 over the cutting down of trees at İstanbul’s Gezi Park marked another turning point for press freedom in Turkey.

The three-week nationwide anti-government protests became a shameful test for Turkish media. As in previous crises, the media acted within the limits the government set for it. During the first week when the protests reached their peak, Turkey’s leading news channels broadcast documentaries rather than coverage of the protests. A documentary about penguins aired at the time has since made the penguin a symbol of media self-censorship.

The Gezi Park crisis ignited another big debate on press freedom in Turkey. Cemal, who was censored and lost his job at Milliyet in the previous crisis, made striking observations about the state of the media in the wake of the Gezi Park protests. Here are excerpts from his July 3 article:

“It is a bleak time for journalists who are skilled and dedicated to their profession and who have conscience and dignity. I would even say that things are now going berserk."

“Each and every day, Prime Minister Erdogan tightens the screw further. He is seeking to create a media that fully submits to him and obeys him like a slave."

“He doesn’t want to hear any dissenting voice."

“He wants to have a 'Rockefeller' media that would never annoy him and be only the voice of its owner."

“He fails to see that this is impossible in our times, in a society so mature and diverse, and in a country where only democracy could be the social glue. Sadly, he fails to realize — despite the message of the Gezi Park resistance — that putting Turkey into a screw press will only make it explode."

“The problem is grave. But unfortunately, it is being ignored. The mechanism of censorship and self-censorship is at work — big time."

“Endless guidance is coming from government quarters about how print and television journalism should be, what commentaries should be avoided and what the coverage should contain."

“Government quarters in Ankara are being asked about who should be appointed as a manager and where, or who should write a column in which newspaper."

“I repeat: None of this is new. But those unpleasant and sad examples of journalism are constantly growing.”

One of the most striking of the unpleasant incidents that Cemal refers to concerns Yavuz Baydar, the ombudsman of Sabah, one of Turkey’s largest newspapers (and a contributing writer to Al-Monitor).

Baydar took a critical stance on his paper’s coverage of the Gezi protests. Like many pro-government papers, Sabah’s coverage depicted the protests as an anti-government conspiracy.

What happened on June 24 may well go down in world censorship history: Sabah refused to publish the article of its own ombudsman. Baydar’s article included criticism of government attempts to explain the Gezi Park protests in the context of an international conspiracy. Baydar also criticized Sabah reports which, in line with Erdogan’s rhetoric, depicted foreign media coverage of the events as another part of the conspiracy.

Sabah did not stop at just censoring Baydar. The same day, Editor-in-Chief Erdal Safak published in his column "A Reader’s Letter," which was critical of Baydar and expressed support for Sabah’s coverage of the Gezi Park protests. He further criticized Baydar for breaching the paper’s editorial policy. Here are excerpts from the “reader’s letter:”

“I support Sabah’s choice of headlines and front-page stories during the Gezi Park demonstrations. I stand by you. That’s why I have extended you support, even if small. A newspaper that protects the country’s interests in these crucial times and reports the truth deserves to be my newspaper.

“Mr. Baydar, if you are really impartial, you need to publish or take into account this letter, too. You say that readers disagree with the headline ‘Good Morning, Gezi!’ Which readers, Mr. Baydar, which readers? Subscribers who receive the paper at their door like me? Or fake Sabah readers who organize on social media and collectively send protest messages with calls ‘to flood pro-government papers with thousands of critical messages’? You could verify my contact info with customer service, Yavuz Baydar, and see that I am a Sabah reader who has been a subscriber for no less than two years. Why don’t you check the contact info of those who criticize headlines like ‘Good Morning, Gezi!’ and see whether they are really Sabah readers?

"If you fail to prove that, Yavuz Baydar, it would mean that you, too, are part of the blackmail campaign against the Sabah management. We, the subscribers, are happy. Non-Sabah readers, Sozcu or Cumhuriyet readers, may be unhappy. What I mentioned above is important: Those who organize on the Internet in forums, mail groups and social media — especially those who favor violence at the Gezi Park demonstrations, those who lash out at the police all the time, the groups that deceive the people with fake photos and videos, they are all collectively organized in sending critical letters to what they call pro-government newspapers under the guise of readers. I see them, I know them.

"Don’t be a player in this game, Yavuz Baydar. Don’t present non-Sabah readers as Sabah readers and as a majority. Don’t harm the Sabah newspaper. Sabah is not alone; we stand by you, brother Erdal …”

So we have a paper that declines to publish the article of its own ombudsman and whose editor-in-chief publishes — on the same day — a “reader’s letter” criticizing him. This incident takes censorship in Turkey to a new level. The paper appears to have chosen an exclusive mobbing method to bully the ombudsman and force him to resign, marking a new chapter of disgrace in the history of Turkish media.

This incident alone illustrates how far censorship and self-censorship have gone in Turkey and how suffocating the media climate has become. Press freedom in Turkey is ringing the alarm bells.