Shooting the Arbiter in Turkey: How Sabah Fired Its Ombudsman

The former ombudsman of Sabah tells his story of the firing that has shaken Turkish journalism and generated international criticism of Turkey’s approach to the media. 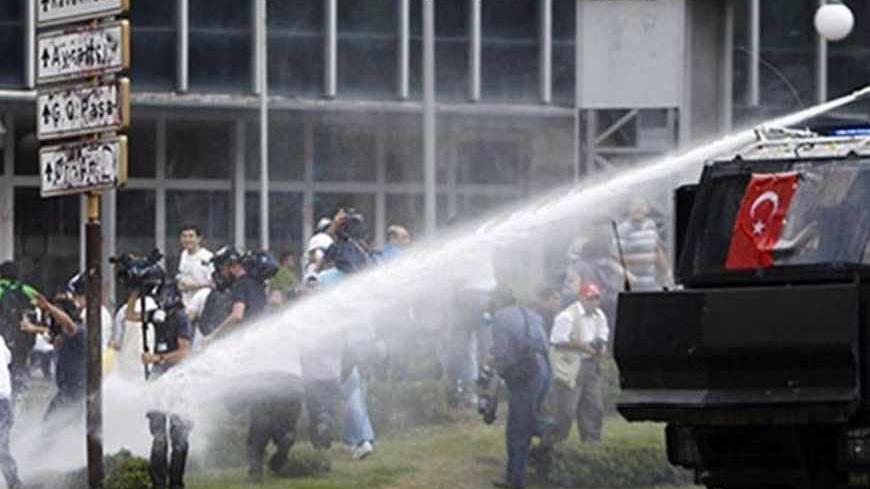 Members of the media are fired upon by a water cannon during protests at Kizilay square in central Ankara, June 16, 2013. - REUTERS/Dado Ruvic

It was early May. I published an important correction in my ombudsman’s column, I guess it was on the first Monday of the month (I could not check the precise date, because the newspaper deleted the ombudsman’s digital archive the day [July 24] after it fired me).

The story in question was a front-page report about a Justice and Development Party (AKP) meeting and contained also the results of a public-opinion poll, which was said to have been commissioned by the AKP and presented to the prime minister. The figures were irrelevant for the ombudsman. What mattered was the objection of the polling company, KONDA, which confirmed conducting the survey but said it was not commissioned by the AKP. It was a simple correction, but still it had to be put on record so as to not mislead the reader.

After the article was sent to the editors in the late-edition hours on Sunday, the ombudsman had to handle busy telephone traffic. The writer of the story — the correspondent who covers the AKP — had already seen the early edition and “alerted” his superiors. The ombudsman came under meaningless pressure to modify the content of his piece in those late hours of the evening, but, as always, no external intervention was allowed to creep into the article.

The next day, a senior editor relayed a message from Sabah’s top management to the ombudsman: “Ombudsman Baydar should better stop slamming this newspaper. Either he gives up those constant attacks or he goes elsewhere to write.”

At the time, it was the most serious friction I had had in my adventure as an ombudsman, a post I assumed in November 2004 under a special contract that guaranteed the ombudsman’s independence.

The message, however, was a flare signal that the “countdown” had started for the ombudsman in a move going beyond even the many existing testaments of the upside-down course the Turkish media had taken.

I continued to do my job. Then the European Commission invited me to speak at a comprehensive open discussion on the deteriorating state of the Turkish media. (At the gathering, held on June 20, I spoke to a crowded audience about the death of media independence and investigative journalism into corruption in my country.)

As the institutional tensions lingered, the Gezi Park protests broke on May 28. Sabah failed so badly in its coverage of the events that the readers virtually went mad. As always, I weeded out the insults and curses from the inpouring criticism and dedicated three straight articles to the issue. Each article heightened the tension.

In May and June, I had private meetings separately with the Sabah Media Group chairman and the editorial coordinator. I was the one to request the first one, while management initiated the second.

At the meetings, I emphasized the following points: “If high-quality journalism is the priority, Sabah should pay attention to editorial independence and ethics and present the reader with ample, accurate and objective news. A news ombudsman supervises only these principles. Sabah is a mass-circulation daily with 30-year liberal credentials. It has a very diverse readership — Turks, Kurds and Alevis, believers and seculars, urbanites and villagers, the young and the elderly. It can never afford partisanship, and government-guided reporting is destined to backfire with this type of readership. In line with my duty, I will continue to share reader complaints and my comments in my column. The column will remain open to any statement, correction or apology you may address to the reader. Criticism is good. To perceive criticism as slamming or attacking does not mesh with professionalism.”

Those meetings also proved futile. At the “Raise Your Voice” conference of the EU on July 20, I spoke about the indispensable role of free and independent media for democratic transitions in key countries like Turkey, and tried to analyze as plainly as possible the pathetic state of Turkish media.

On Sunday, June 23, I wrote a general media critique on how the Turkish media demonized the international media and proclaimed it a conspirator in the wake of the Gezi Park events. The Sabah editor, however, rejected this piece even though he did not have that authority. He did not stop there and directed accusations at the ombudsman in his own column.

Following this sanction, which was so scathing to the paper’s institutional structure, I took two weeks off. Then, upon the request of The New York Times, I penned a commentary about the negative effects of media ownership by conglomerates on editorial independence globally, using the Turkish case, which The Times published. They must have doubted that the article would get enough attention in the choking media climate in Turkey, since they took the unusual step of posting also its Turkish version, on July 20, as did the International Herald Tribune.

On Sunday, July 21, I sent Sabah a fresh ombudsman’s column. The article spoke to how paper-reader and editor-ombudsman relations should be, emphasized the importance of authority boundaries and self-supervision, and explained to the reader why censoring the previous article had been wrong.

This article, too, was rejected without any explanation.

Two days later, the Sabah ombudsman was dismissed on grounds that he had “insulted” the newspaper on various platforms, primarily The New York Times. The ombudsman, however, had always voiced critical opinions since 2004, when he assumed the job, at a series of international gatherings, workshops and reporting he attended not only as the Sabah ombudsman but also in his capacity as a board member of the Organization of News Ombudsmen and a member of the UNESCO National Communication Committee in Turkey.

Censoring the articles of an ombudsman and then sacking the ombudsman is a first in the history of media self-supervision. Sabah also blocked access to all of the ombudsman’s past articles on its web site. The ombudsman position is likely to be abolished altogether.

What I feel about what happened is only sorrow and great disappointment. For 14 years, I have done my best to help the Turkish media — covered with decay, grappling with serious problems and having its professional activities squeezed by judicial screws — to produce credible reporting for the people. My struggle has been “awarded” with censorship and sacking. My whole mission now seems to me to have been a “fight against windmills.”

On July 24, the day after I received the notification of my sacking, there were traditional “celebrations” to mark the 105th anniversary of the lifting of censorship in Turkey.

What an irony! For me and thousands of desperate colleagues, it was no more than a bitter reminder of the treatment accorded to our editorially paralyzed media and our debilitated profession.