Turkish Media Drifting Toward an Abyss

The crisis at Sabah and Milliyet, two of Turkey’s flagship newpapers, has deepened under persistent political pressure, sounding the alarm for the country’s media. 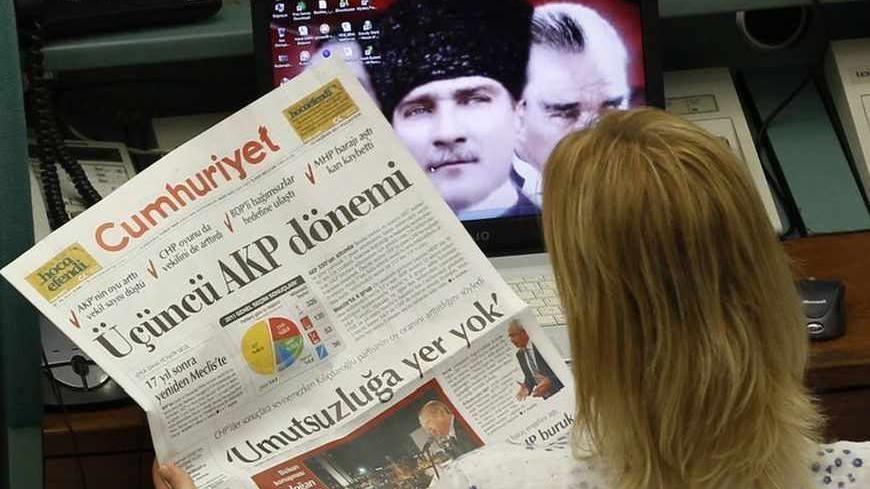 Turkey’s bleeding media is drifting fast into an abyss, which may soon become the final resting place of free and independent journalism in Turkey. The crisis at the Milliyet daily, a major hallmark in the Turkish press, deepened this week as editor-in-chief Derya Sazak resigned and columnist Can Dundar was fired in a phone call by the daily’s owner himself. The turmoil at Milliyet had boiled over earlier this year when veteran journalist Hasan Cemal was forced to quit after he criticized Prime Minister Recep Tayyip Erdogan and the media establishment. Fears are rife that the political “cleansing” at the paper will extend to other writers.

A similar climate of fear has gripped the Sabah newspaper. Some reporters have been shown the door. At least two columnists have recently been censored on “orders” by management (one was critical of political counseling, while the other of the tax inspectors’ raid at TUPRAS, a company owned by the Koc business family, which has become the target of government ire).

Murat Mentes, a columnist at the pro-government Yeni Safak daily, has also quit under pressure.

Dedicated journalists have no doubts that the wave of intimidation is part of a government-guided project to redesign the media. The tremor rattling Sabah and Milliyet has an added significance. Both are two deep-rooted press establishments, representing respectively the liberal and social-democratic camps of the political center. Milliyet left its mark on Turkey in the 1960s and '70s, Sabah in the 1980s and '90s.

These two flagships of journalism have run aground.

Sabah’s former editor-in-chief, Ergun Babahan, says developments since the Gezi Park protests have confirmed “what a good decision he had made'' when he resigned at the end of 2008.

“Today we see a Sabah in agony, fighting for its life. In the blink of an eye, Sabah became the government’s media organ with a team of columnists detached from Turkey’s realities and an editorial board aloof from any professional and ethical considerations with only one real concern — their paychecks,” Babahan told Al-Monitor.

For seasoned journalists, the hemorrhage in the sector is the result of ownership structures corrupting media-government relations big-time.

“In the 1980s, the structure of media ownership underwent a significant transformation. This contributed to newspapers claiming a social engineering role in the 1990s. As journalism strayed from universal norms at that time, it ended up lacking the means to counter the AKP government when the party came to power with a strategy of installing ‘mission journalism.’  And that’s how journalism failed against the AKP,” Faruk Bildirici, the ombudsman of the Hurriyet daily, told Al-Monitor.

“The government ‘successfully’ advanced its strategy — at times by pressuring bosses or singling out journalists as targets and getting those journalists fired, at times by creating new media outlets or laying hands on existing ones,” he added.

Alper Gormus, a columnist with the T24 website, blames media owners for consolidating what was already a “corrupted media order.” Gormus was formerly editor-in-chief of Nokta magazine, which was closed down by its owner after it published the coup plans of a four-star admiral.

In comments to Al-Monitor, Gormus highlighted the following points: “In the summer of 2000, a heated debate took place among journalists when the government brought to parliament the bill on the Supreme Board of Radio and Television [RTUK]. The most controversial provision entitled media bosses to take part in public tenders. Various journalists, and primarily those from the Dogan media group, openly backed that provision. They argued that it would empower media bosses financially and make them more resilient to government pressure. A small number of other journalists argued the opposite — that media bosses would become dependent on the government. That group highlighted also the failure and reluctance of Turkish journalists to defend their editorial independence vis-à-vis their bosses and argued that this would make it easier for bosses to comply with the wishes of governments. The point we have reached today demonstrates clearly that the journalists who were the minority in that summer of 2000 were absolutely right. Media bosses are devoting all their energy to stay on good terms with the government, resorting to self-censorship and silencing their writers. And sadly, any calls for editorial independence — supposed to come from the journalists themselves to force bosses to display some degree of resistance to external pressure — are still very feeble.”

Babahan, for his part, added: “I’d repeat what I have been saying ever since 2002: In the ownership of this predatory mindset, the media is dragging both Turkey and itself to a disaster.”

The prevailing conviction among journalists is that this campaign of media re-design, aimed at defanging journalism and carried out via media owners, is a key priority for Erdogan, who is shaping his entire strategy on the goal of further consolidating his power in key elections in 2014 and 2015.

According to Bildirici, fears are rife that “the choking government pressure on critical, investigative and independent journalism will grow even further as the elections approach.”

In an article following Sazak’s resignation and Dundar’s sacking, Hasan Cemal loudly rings the alarm bells. “The media bosses’ collaboration with the government — be it voluntary or involuntary — undermines not only journalism but also democracy, and disembodies free speech. This is exactly what is happening in Turkey today. The tightening siege around the media is besieging democracy, too. Any failure to see this reality, or turning a blind eye to this reality, or keeping mum in the face of this reality is recklessness and disgrace for democracy.”

The drive to bind the media to the government is likely to extend beyond Sabah and Milliyet. The print and audiovisual media are already badly pruned. Acute anxiety reigns at national newspapers which have somehow managed to protect their editorial independence so far — Zaman, Radikal, Cumhuriyet, Taraf and Dunya. With their resolve to stick to professional journalism, they risk drawing the government’s wrath upon themselves. The risk is growing by the day as the elections approach. The audiovisual media, on the other hand, has been openly gutless.

So, the scene is being left between the media placed under government control and a partisan media with organic ties to the opposition.

In the meantime, an increasingly desperate public — including political and economic decision-makers — is scrambling to find other channels for objective news and independent commentary.