Can Dundar, veteran journalist of Milliyet daily, is fired under government pressure. 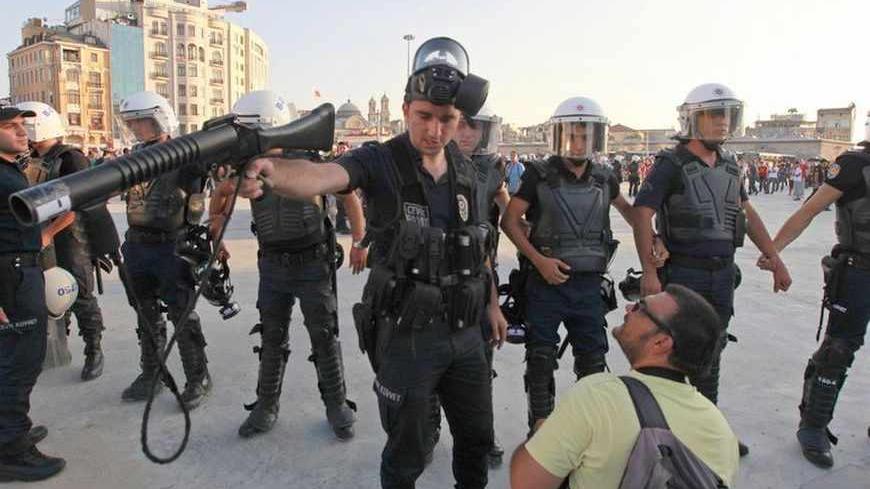 A riot police officer orders a news photographer to move away during an anti-government protest in central Istanbul, July 28, 2013. - REUTERS/Osman Orsal

It’s getting more depressing every day writing about yet another veteran journalist, this time Can Dundar of Milliyet daily, getting fired because of his critical approach to government handling the Gezi Park protests in June, and being personally warned to be cautious by family, friends and colleagues in this new political environment before commenting on anything about the Justice and Development Party (AKP). As someone who lost her contract in May 2010 with Haberturk, allegedly by a request from the prime minister’s office, I empathize with those caring voices around me.

But what happens if all our voices are silenced one by one? While I privately feel grateful not to be working for a Turkish media organization, I strongly urge everyone to include George Orwell’s 1984 in their summer reading list as I keep finding myself referencing that novel in my articles because it feels like it's reflecting the atmosphere here well.

There is undoubtedly a heavy cloud over the Turkish media’s freedom and independence moving forward — not that it was perfect in the past. As the Committee to Protect Journalists (CPJ) writes, “Covering the news in Turkey is more dangerous than it has been in two decades. CPJ has documented dozens of anti-press attacks since the [Gezi Park] protests began, including vandalism and assaults, with police posing the biggest threat.”

In his initial remarks after the news broke, Dundar said he is neither the first victim nor will be the last of the country's new political atmosphere. “I learned in a telephone call I received from Erdogan Demiroren [Milliyet’s owner] that my job is terminated. … I was expecting this for a long time; there was no surprise,” he said yesterday, Aug. 1. “What’s important is it’s not only about losing a job, we’re on the verge of losing a profession. Until we get together again, there will be more victims.”

“There is no Abdi Ipekci [the legendary editor-in-chief of Milliyet from 1959 until his assassination in 1979] journalism at Milliyet for a long time, but there is, 'Let not the Master be disturbed' journalism,” wrote Hasan Cemal, who was forced to resign in March after 35 years at Milliyet when the daily broke the biggest scoop about the negotiations between the AKP and the imprisoned Kurdistan Workers Party leader Abdullah Ocalan.

Looking back at that time, Dundar wrote yesterday: “It was clear what was happening to those who do not bend down before all [AKP] policies. … When Erdogan said from the platform [days before Cemal’s contract was suspended] that 'damn your journalism' was not an expectation, but an order. The boss’ floor was flooded by those telephone calls from the ministers/advisers to indeed accomplish that.”

Aysenur Arslan, another veteran journalist who was fired from CNNTurk due to her strong opposing views of the AKP government, wrote about the Dundar case on July 28. “The Gezi protests have become a real turning point for Erdogan. Erdogan’s fear and anger as result of these events are so huge that he and his team could do anything.” Indeed, the AKP was so troubled by the Gezi Park protests that Mehmet Ali Sahin, deputy chairman of the ruling AKP, said the protesters should be legally evaluated under a section of the Turkish penal code that “requires life sentence.” “Because I believe the protesters were trying to bring down the government,” Sahin said.

Arslan’s point about the mounting pressure regarding Dundar was this, though: “The AKP came to such a point that they can even discard the Demiroren group, which has been supporting [the ruling party] for years. Surely, if what they want does not happen!” she wrote. “They want Can Dundar’s contract to be terminated. Can is on leave for a while. I knew this even before he was forced to go to vacation. Here is what I know. After the most heated days of the Gezi Park protests, Yalcin Akdogan [the most prominent adviser to Erdogan] screamed the place down in Ankara. In fact, by giving names: What are these Demiroren doing? Are they trying to stab us from the back? If they don’t do what’s required, we will immediately sacrifice them. We know who does what one by one. Starting from Can Dundar, all will go. Whoever sides with those Gezi Park protesters stands against us. Maybe his words were not verbatim exactly like this, but I know Yalcin Akdogan’s rhetoric well.”

On July 30, Akdogan responded to Arslan from his column at the Star daily. “The negative image that is trying to be established against Prime Minister Erdogan is being done by accusations such as silencing the media, intolerance to criticism, and clearing the media from contrarian columnists,” wrote Akdogan under the headline, “Are we on the hook for media engineering?”

“The AKP government certainly does not have any policy or taken any step in an attempt to create partisan media, silencing the press, or discharging the opposition. … For some time, Aysenur Arslan has been writing wrong facts about me. … First of all, she claims we screamed down the place during Gezi events. But the media’s approach and coverage of the protests are so open out there that no explanation is needed. I even did not talk to any friends in the media at that time — let alone scream down the place.”

Nevertheless, for Dundar and others to lose their jobs due to government pressure at privately owned media networks, one needs to spotlight the relationship between the government and media owners, and how the media ownerships continue to increase their wealth through this privileged access to the highest authorities of the state. Mehmet Baransu of Taraf daily, for example, provided quite a controversial account about the Demiroren group’s background nine days before the Gezi Park protests started.

“It was discovered that the owner of Milliyet and Vatan dailies, Erdogan Demiroren, is being accused of murder and seizing the victim's wealth,” Baransu wrote on May 20 as if it was a sign of a mounting pressure on the Demiroren group. “According to the records of General Staff, the investigation about the murder is an ongoing one since 1982. According to the document that Taraf had found, Erdogan Demiroren has unjustly appropriated the properties of Arsimidis company and has a role in the murder of a businessman owning a brick factory.” Baransu went on to write: “The date is prior to 1980. One of the owners of the Greek-origin Arsimidis Co. was murdered and his corpse was burned somewhere around Halkali, Istanbul. The representatives of this company sued [Demiroren] for illegally seizing the assets of this company. This trial went on for many years.”

Once the government discovers such a suspicious element, the general perception is that that is how power is being used to clamp down all those divergent views in the media. Therefore, the media ownership needs to be clean and free of being dependent on the government work or bids to sustain their wealth and investments. Although this is nothing new about the loose ends of the fourth estate and it is one of the reasons why it fails to stand to the highest standards of contributing to the advancement of democracy in this country, the Erdogan government is probably the most wise and the talented in knowing how to use these pitfalls to their benefit.

In Cemal’s words, “During Erdogan’s period, the media’s livelihood is getting encircled more and more every day.”