The Death of Journalism in Turkey

Cengiz Candar writes that when veteran Turkish journalist Hasan Cemal resigned on March 18 from his 15-year stint with daily Milliyet after it refused to print his latest article, it was the death of decent journalism in Turkey. 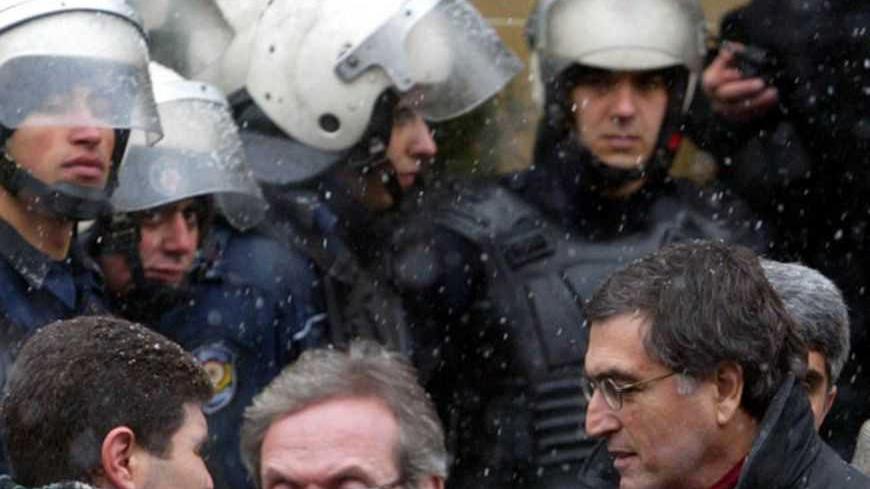 Turkish columnist Hasan Cemal (R), one of five journalists who were on trial for insulting the country's courts, leaves the court house following their trial in Istanbul, Feb. 7, 2006. - REUTERS

In Turkey, Jan. 17, 2013, will be remembered as “The Death of the Journalist.” Nobody will ask which journalist because the name that most deserved the label, ‘’The Journalist,” was without doubt Mehmet Ali Birand. On that day he died. It was a sudden death.

He was a journalist with international stature who had signed his name to so many successes in journalism and, more importantly, he was the pioneer and unrivaled master of television journalism. In recent years, he had added to his long list of qualifications being the anchorman of an important TV channel. Although he had been afflicted with pancreatic cancer two years ago, he never abandoned the TV screen apart from his days of surgery and annual leave. Even in the evenings of his chemotherapy sessions he appeared in front of his millions of viewers. His death did not come as the inevitable end of his cancer. One night he said to his viewers that “We will meet tomorrow night" and went to the hospital for a simple surgery. His heart just stopped totally unexpectedly after a successful surgery. Probably his heart had mutinied against sustaining the formidable energy that had kept him going for over 50 years.

His was not a physical and biological death. Cemal was censored.

Birand died suddenly. Millions of people who knew him for years and who welcomed him as a member of the household were shocked by his loss. On Jan.19, Istanbul was the scene of one of the most spectacular funerals ever seen. People came from all corners of Turkey to bid farewell.

Birand's death was "The Death of the Journalist."

Two months later, on March 18, 2013, one of the Birand’s closest friends, Hasan Cemal, known as the "doyen of the print media,'' was killed when he was alive. His was not a physical and biological death. Cemal was censored. He was prevented from writing and his ties to the daily Milliyet, where he spent 15 years, were severed.

For many, this event is “The Death of Journalism’’ in Turkey. Many agree that the profession of journalism and practice of this profession in Turkey have been dealt a fatal blow.

Birand was 71 and Cemal is 69. Both are recognized as ‘’titans” of the Turkish press from the end of the 1960s. In Turkey’s recent press history, Hasan Cemal lived a colorful adventure.

For one thing, Hasan Cemal is the grandson of the Cemal Pasha, one of the notorious triumvirate of the Union and Progress Party that brought about the end of the Ottoman Empire. The founding cadres of the Turkish Republic, including Ataturk, were members of Union and Progress. Unionism is the label affixed to political behavior that has left important marks on Turkish politics. But Hasan Cemal’s grandfather Cemal Pasha owes his reputation more to his service as minister of the navy before World War I and later as the governor of Damascus. The region from the northern border of today’s Syria to Gaza was under his “monarchic'' rule. He ruled the region with an iron fist.

He didn’t allow breathing space to Arab nationalism. The martyrs’ statues in Beirut and Damascus honor Arab nationalists and intellectuals Cemal Pasha had sent to the gallows. He spent the war years at his headquarters in Damascus and at Jerusalem’s August Victoria. No book that narrates the years that led to the establishment of Israel goes without mentioning his name. Also, his name is mentioned in every reference to the Armenians because of his standing  in the Union and Progress triumvirate. He was assassinated in 1922 by an Armenian militant in Tiflis.

Hasan Cemal, who never relinquished the name of his grandfather, was first heard of in 1969-70 as the editor of Devrim newspaper, which had links to a military junta that aspired to stage a military coup with the Unionist traditions. Later, for many years he was the editor-in-chief of Turkey's oldest daily, Cumhuriyet, which was considered to be the most important mouthpiece of the same tradition. While preserving the newspaper’s serious outlook, which made it known as Turkey’s ''Le Monde," he carried his paper to the level of Spain’s El Pais, the pride of post-Fascism era.

He fell afoul of Turkey’s influential military hierarchy. Eventually, he became one of Turkey’s most vocal opponents of the military and a spokesman for democracy. In the 1980s, he stood against the military rule as a member of the executive board of the International Press Institute. He got into a conflict with the Cumhuriyet he was editing. His separation from the paper became a big story and the newspaper was split.

Hasan Cemal spent the better part of 1990s as a columnist and also as a successful field reporter with daily Sabah. He had no problems in the transition from being one of the most revered newspaper managers to a mischievous correspondent. After 1998, when he started to work at Milliyet — most of his time there corresponded to Prime Minister Recep Tayyip Erdogan’s reign — he also stood out as a writer of many best-seller books. Although he lived with the name of his grandfather, their views never had anything in common.

He became known as the most outspoken voice of democracy against coups. He led the way in Turkey’s struggle to join the European Union. But his most prominent role was in the Kurdish issue and its solution. Along with the writer of these lines, he became known as the most influential name on the Kurds. In 2006, after the murder of Armenian journalist Hrant Dink in Istanbul, he became interested in the Armenian issue at levels that would best be described in idiomatic Turkish as “rattling the bones of his grandfather in his grave.” To his books against military coups, on Kurds, on his journalism experience and unheard of self-criticism books, he added on September 2012 his book, ‘’Armenian Genocide — 1915,’’ which shook Turkey.

His credibility in journalism could not be disputed. For the vast majority of journalists, he was their guiding elder brother [Cemal abi, in colloquial Turkish]. Even Prime Minister Erdogan was respectfully addressing him as "Cemal abi." Over the last two years, because he did not refrain from criticizing Erdogan, their relationship cooled off. He began calling attention to the anti-democratic tendencies of the prime minister.

In the last decade, the Turkish media business changed so drastically and the media went under Erdogan’s thumb so incredibly that what was feared finally happened. The new owners of Milliyet, who were worried about the fate of their business relations with the government, tried to censor Hasan Cemal’s articles and to stop him from writing. His last article, ”The political rule-media relations and principles of journalism," was not printed by Milliyet and as of March 18,  2013, Hasan Cemal was silenced in the print media.

Sure, the article received coverage in social media but for Cemal not to find a place in print media was interpreted as “The Death of Journalism in Turkey.” In today’s circumstances, you can’t do journalism in Turkey, and if you are the object of Erdogan’s wrath you won’t be writing anymore even if you are a doyen journalist.

These are the dramatic implications of silencing Hasan Cemal. Just as we were beginning to believe that the Kurdish issue was about to be solved, the question “Can there be peace without democracy?” is now posed in reference to Cemal.