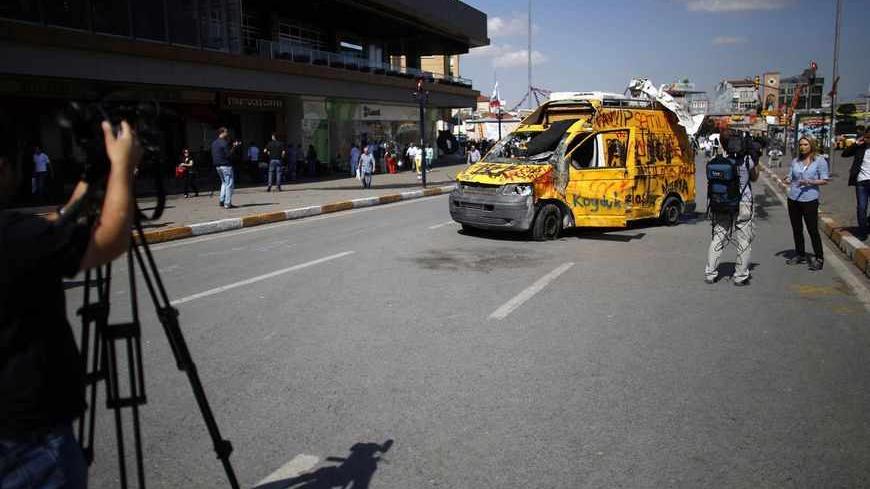 Social explosions sometimes unexpectedly produce multiple outcomes. The first consequence of the demonstrations that erupted from Gezi Park was the realization that Istanbul's media conglomerates no longer were capable of independent news reporting and analysis — and that they had become editorially bankrupt.

May 31 marked the milestone that exposed how those grandiose, pompous buildings of the media that calls itself  “mainstream” — whose bosses are engrossed in many other money-making ventures — were devoid of courage, professional perception and ethics.

On that day,the traumatic events in the center of the city had no news value for any of those media channels. While the anger that ignited at Gezi Park was spreading street by street, almost all those channels were airing documentaries or talk shows that had no relevance to the extraordinary story breaking out.

Their editorial choice was a necessity.

Reporting the developments could have angered Prime Minister Recep Tayyip Erdogan. To practice good reporting would be out of question for media bosses and managers who fear his anger could affect their business connections and their expectations of economic benefits from the government. Those who were appointed as editor-in-chief and managing editors were those who had special experience in knowing what is news or not according to the bosses' interests.

For example, in December 2011 when Turkish warplanes bombed and killed 24 Kurdish villagers in Uludere, many channels decided this had no news value and imposed a blackout on it while the entire country was following it through social media.

This disaster of journalism that compounded the Uludere tragedy was the natural outcome — albeit against the public interest — of the verbal agreement that was reached in the fall of 2011 in Ankara between Erdogan and the grand media bosses.

The same format is in practice again. For example, while Taksim Square protesters were being attacked by police with suffocating pepper spray, Haberturk TV was airing a live talk program by three experts discussing schizophrenia.

It was truly difficult to come up with a more ironic example than this to illustrate the editorial paralysis and pathetic helplessness of the Turkish mainstream media.

No wonder that the people of Istanbul camped in front of their screens to see what was happening at Taksim and  to hear what TV was saying went berserk when their mobile phones and social-media reports contradicted the mainstream media’s world of make-believe.

On the night of May 31, people saw a media that had hit the rock bottom under the ruthless censorship of bosses who have long been the slaves of political-bureaucratic power.

The elites of this city had not cared all that much about the systematic blackout of news on the Kurds and the PKK. Only when the events right under their noses were treated as if they didn’t happen did  the people see the true picture.

By June 1, public trust in news reporting had all but vanished and the death notice of the conglomerate media was posted in peoples’ minds.  But when the embarrassed silence of the media continued on that day and when an exclusive interview an insensitive journalist conducted with the prime minister on Haberturk TV turned to a parody of “politician-journalist accord,” people truly lost their heads.

This anger spread to streets and people marched to buildings of big media such as NTV and Haberturk. Thousands of people shouted slogans, called for boycotts and staged sit-ins to protest the news blackout, the censorship by bosses and their bias to justify government behavior.

The question of the media sector and the journalism profession, revealed by these pathetic sights, is far more than the question of journalists in prison. To be blunt, major media establishments whose owners are active in non-media business affairs resemble a slave camp, an open-air prison where professional freedoms count for nothing and editorial independence is non-existent.

Real journalists are unhappy. They all feel shackled. Institutional culture is so oppressive nobody can debate the essentials of news reporting. Merits and competence is defined by sheer obedience to the boss and propensity to self-censorship.

Why did the media groups resort to censorship on the night of May 31? One reason matches the true grievance of the Gezi Park protests: corruption.

For a long time now, the news coverage of the Turkish media has been shaped by the personal interests of ambitious, powerful, money-making bosses with the government.

These businessmen active in energy, construction, tourism, telecommunications and mining use the media they own as cards to play when going after public and municipal contracts. Everybody knows that the owners of most channels that blacked out the news on May 31 have either received or are waiting for giant Istanbul contracts.

Erdogan knows well that this politics-media alliance built on money and influence is a “win-win’’ situation for both sides, the government and media bosses. The true decision maker of this alliance is Turkey's prime minister. People resent this alliance.

Behind the recent reshuffling of media ownership was this quest for power (such as ShowTV, Star TV, Skyturk360). Whoever takes over the government first wants to control the media by using public contracts as a “carrot.”

Media bosses are after ever-expanding Istanbul projects that mean millions of dollars. These bosses cannot, therefore, allow true journalism: Angering the government is a major risk.

That is why you never hear in the major media any of the corruption stories we all know about. There is no investigative journalism. That no big media boss appears on the list of taxpayers despite the big money they make leads us to ask one question: How can a media that grows with corrupt capital cover the raging corruption in a country?

This is the reality the people of Istanbul realized on May 31: Media are colluding with this glut of corruption and the oppressed group of working journalists can do nothing but watch helplessly.

Now everyone is focusing on alternative news sources. People are finding out the importance of getting the truth via the Internet.

The other day, Semih Idiz wrote in the independent daily Taraf  that international websites such as Al-Monitor or The Huffington Post and national ones as T24 and Bianet are now much more attractive to Turkish people craving for free and independent news reporting.