Erdogan Threatens to Settle Score With The Times

Turkish Prime Minister Recep Tayyip Erdogan threatens to “do what we can in the legal sphere” against the British daily The Times for publishing an advertisement denouncing his government. 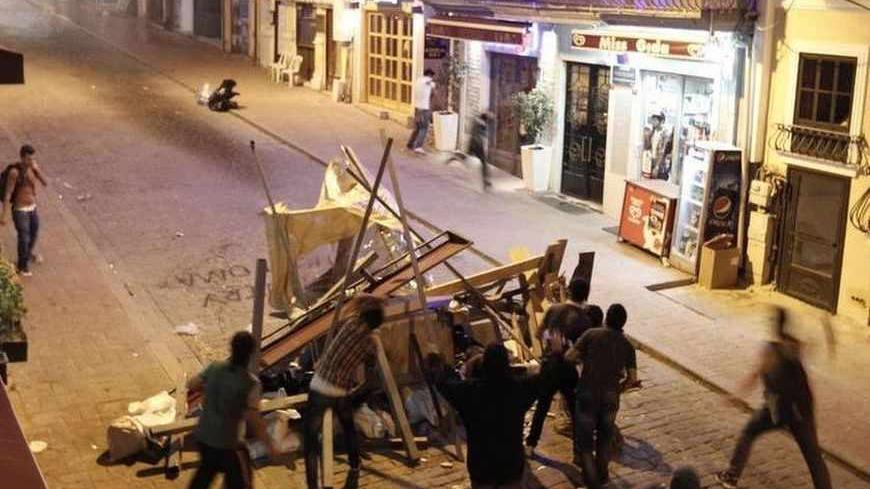 Turkish Prime Minister Recep Tayyip Erdogan is threatening legal action against one of Britain's oldest and most influential newspapers, The Times. The newspaper published an open letter, in the form of an advertisement, signed by 30 prominent names, ranging from Ataturk's biographer Andrew Mango to Oscar-winning actress Susan Sarandon. The letter addressed Erdogan directly, harshly criticizing the brutal use of police force to clamp down on the Gezi Park protesters in June, as well as his dictatorial instincts. Erdogan's unflinching outburst against the ad is a typical act of intimidation, targeting a domestic audience rather than actually filing a case against The Times or the letter's signees.

Erdogan has previously acted in a similar fashion, for example, when he threatened to sue the US State Department in December 2010, but to no avail. As I wrote that same month in the Weekly Standard, "At issue is the insinuation, laid out in US diplomatic cables purloined by Wikileaks, that Erdogan is corrupt." One such cable, dated Dec. 30, 2004, was penned by former US ambassador to Turkey Eric Edelman, stating, "We have heard from two contacts that Erdogan has eight accounts in Swiss banks." Erdogan denied the allegation.

Edelman further wrote in one of the cables uncovered by WikiLeaks, "[H]is explanations that his wealth comes from the wedding presents guests gave his son and that a Turkish businessman is paying the educational expenses of all four Erdogan children in the US purely altruistically are lame."

Back then, I concluded the article stating, "The WikiLeaks story will eventually fade away but a legal case against American diplomats would keep the allegations of AKP [Justice and Development Party] corruption front and center — the same allegations that so unnerved him in the first place."

It's not that potential lawsuits against the State Department and The Times are identical, but that Erdogan and his AKP members talk about the alleged freedoms of the Turkish media. The more people talk about Turkey sliding backward in freedoms of media and expression, the more there will be people writing and voicing the kind of criticism that unnerved Erdogan with the ad. It won't be a pleasant ride for Erdogan to sue The Times, at least for that very simple reason.

Western diplomats told Al-Monitor that the prime minister is totally ill-advised in handling such matters, and that there is no reason for him to take all criticism as a direct assault on his integrity. They suggested that he could have easily dismissed this ad, remarking, "I'm running a country. There's more important stuff that I need to take care of. Look what's happening in Syria or the attack to our embassy in Somalia. I need to deal with more serious issues than responding to an ad in a British paper." Period. That would be the end of the talk.

Though talk of a lawsuit against The Times will surely die down soon, Erdogan is simply showcasing what he can do to Turkish citizens who share the sentiments of the letter's signees. The Reporters Without Borders 2013 Press Freedom Index lists Turkey as a "difficult situation." Kadri Gursel, an Al-Monitor contributing writer, laid it all out in a recent article titled, "Gezi Cleansing in Turkish Media," by writing, "According to [the Union of Turkish Journalists], 36 journalists resigned, 20 were fired and 14 were sent on compulsory leave." If this is not yet again another chilling effect on the media, what is?

Truth be told, it is difficult to assess whether Erdogan's take on the media would have an electoral impact on the constituency that keeps the AKP in power. In any case, many who previously sympathized with him in Western capitals, from politicians to journalists, are now having second thoughts about his perception of democracy — and that is a huge blow to his image in the international arena.

On July 26, Erdogan said, "These people who have signed this letter are seriously deceived, truly misled. Such a letter won't bring any stain to Turkey's credibility, but such a letter, filled with nonsensical and incorrect accusations, only clouds the respectability of those who signed it." He continued, "So how much money did you make out of this advertisement, Times? That is what you're worth. We will do what we can in legal sphere. We will settle this score accordingly."

For those who honor freedom of expression, the issue should not be what the advertisement says, which basically draws attention to the fact that the Gezi Park protests have "left 5 people dead, 11 blinded due to indiscriminate use of pepper gas, and over 8,000 injured."

The ad also stated, "Yet, only days after clearing Taksim Square and Gezi Park relying on untold brutal force, you held a meeting in Istanbul, reminiscent of the Nuremberg Rally, with total disregard for the five dead whose only crime was to oppose your dictatorial rule."

That said, anyone who is not interested in this point of view can simply choose not to read it. It is as simple as that. But to deny the right of such opinions to be published surely cannot be explained by honoring freedom of media and expression — to say the least. The problem, however, lies with Erdogan's perception of the function of newspapers, that they should only convey messages that comfort those in power, as if they can all be bought or sold for a certain amount of money.

By the same token, one may also take the same approach and question the recent change of hands in prominent Turkish media networks. The governmental agency Savings Deposit Insurance Fund (TMSF) seized the Aksam daily, Show TV and SkyTurk 360 due to their huge debts only to be sold in July — without any open bidding — to Kolin-Limak-Cengiz, a consortium known to have close relations with the AKP government.

In that framework, Erdogan may not be contradicting himself when he questions how much it costs to buy The Times' integrity. This may be how he perceives the sale of Show TV, SkyTurk360 and Aksam daily. As more of those from Erdogan's side of the political divide come to control the media, there will be less critical views on his governance.

If one really needs to look out for someone to blame, I would advise all to dispense blame between the Erdogan government and the newsrooms, including the media ownership, the latter of which I find more responsible regarding today's media and freedom of expression challenges in Turkey.