US, Turkey try to contain chill in relations 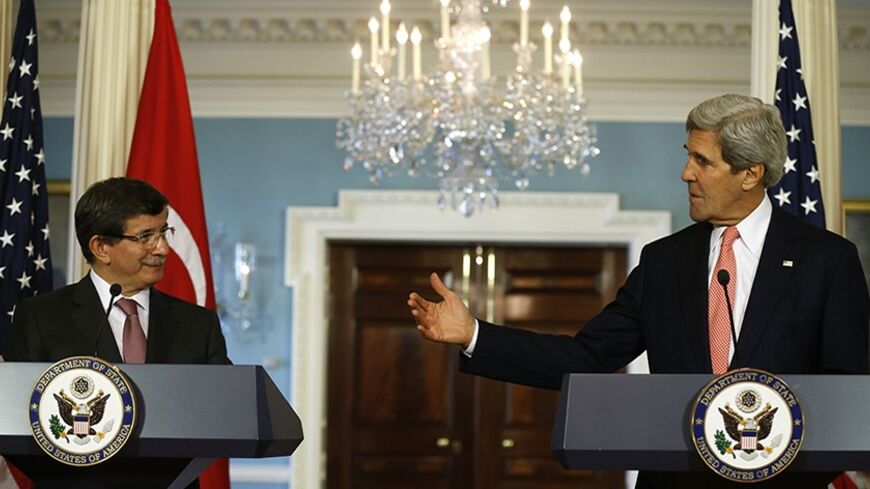 US annoyance with Turkish Prime Minister Recep Tayyip Erdogan, over his barely veiled allegations that the United States was behind the Gezi Park protests, has been apparent for some time. Washington has, nevertheless, given him the benefit of the doubt due to Turkey’s geopolitical importance and alliance with the West, especially at a time of turmoil in the Middle East.

New accusations by Erdogan, following the Dec. 17 corruption scandal, have aggravated matters, and it seems that in Washington, patience with him and his party is wearing thin.  A rise in negative commentary and editorials on Turkey in the US media — including the views of two former US ambassadors to Ankara — shows that not all is well in Turkish-US ties.

Tellingly, President Barack Obama has not felt the need since August to call Erdogan for consultations on anything, including crucial developments in the Middle East. The US side is said to be increasingly nettled over Erdogan’s allegation that the United States is also behind the current corruption scandal, and particularly angered by his suggestion that US Ambassador Francis Ricciardone remain in Ankara on sufferance.

“We told them to cut their relations with Iran. They did not listen to us. You will now watch the fall of the empire,” Ricciardone was quoted as telling the EU ambassadors. These papers cited this as proof that the United States wanted to get rid of Erdogan. Erdogan himself accepted these reports at face value. Some say this proves it was a government spin.

“Ambassadors are engaging in some provocative actions. I am calling on them: Do your job. We are not obliged to keep you in our country,” Erdogan told supporters in Samsun on the day press reports targeting the US ambassador appeared. He did not name Ricciardone, but few had doubts as to whom he was referring.

Ricciardone rebutted the press reports after hearing Erdogan’s remarks. “The United States is in no way involved in the ongoing corruption and bribery operation. Nobody should put Turkey-US relations in danger with unfounded claims,” he said in a Dec. 21 post on the US Embassy’s Twitter account. Though Ricciardone referred to the Yeni Safak, Star and Aksam reports and made no reference to Erdogan, the target was again clear.

Noel Clay, a deputy spokesman for the State Department, also expressed US dissatisfaction over the allegations in the Turkish media, which Erdogan accepted unquestioningly. “Attacks by certain elements of the Turkish media against our ambassador, representatives of the international media and US individuals and quarters are extremely disturbing,” Clay told Turkish reporters in Washington on Dec. 24, according to the daily Hurriyet.

Remarks attributed on Jan. 31 to Melih Gokcek, Ankara’s long-serving mayor and member of Erdogan’s ruling Justice and Development Party (AKP), will only add fuel to the fire. According to daily Vatan, Gokcek claimed in a Jan. 30 address to party supporters that seeing Turkey get stronger economically “was driving neocons in Washington mad,” and prompting them “to stir up trouble in Turkey.”

Gokcek also said he had challenged Ricciardone in July over remarks Ricciardone allegedly uttered — although it was not clear where and when — to the effect that “Erdogan and the AKP would be sent off in November or December.”

Maintaining that Ricciardone did not deny anything, Gokcek said, “The picture is clear. These barons and neocons have decided to redesign Turkey to govern it, and, as a priority, aim to send Erdogan and the AKP off.”

Once again the US Embassy was quick with its rebuttal. In a statement made available to Al-Monitor Jan. 31, the US Embassy “categorically denied the inaccurate statement attributed to Mayor Gokcek regarding his conversation with the ambassador on July 22.” The statement said that Ricciardone had “stressed to the mayor that the United States has not and will not interfere in Turkish politics and rejects all allegations to the contrary.”

These developments come not long after Turkish Foreign Minister Ahmet Davutoglu was lauding relations with the United States, and arguing that the “value-based model partnership” between the two countries “will continue forever, and will be one of the main assets for the international community to resolve any issue.”

Davutoglu uttered these remarks at a Nov. 19 joint press conference with US Secretary of State John Kerry following official talks in Washington. The current chill in ties, however, belies this upbeat assessment.

No one expects a dramatic break in these ties, of course. The mutual strategic interest and decades of military cooperation are simply too important for either government to put at risk. Washington has therefore maintained a relatively diplomatic line with Ankara, despite the wild claims from Erdogan and members of his government and party.

Clearly, though, personal ties between Erdogan and Obama are not what they were in May 2013, when Erdogan visited Washington for what was later billed as very successful talks. When asked by Turkish reporters why Obama has not called Erdogan for nearly seven months, Ben Rhodes, the US deputy national security adviser for strategic communications, noted the “cautious annoyance” felt with Erdogan.

“I think that over the course of the last five years, the president has been able to cooperate very effectively with Prime Minister Erdogan. And frankly, that remains — if you look at the regional agenda that we have, we’re still working very closely with Turkey,” he diplomatically stated on Jan 29.

Asked about allegations that the United States is meddling in Turkey’s internal affairs, Rhodes said these allegations “were not helpful.” He added, “I’m going to be candid with you. It’s — there’s a baseline of trust when you’re an ally that we, I think, maintain. Turkey’s a NATO ally. We cooperate as a matter of course on lots of different issues. I think as a general matter, we would reject the notion, again, that somehow the United States is — or our ambassador, for instance, is somehow involved in any of the political machinations inside Turkey. We’re not. And so that’s something we will continue to make clear.”

Washington’s anger toward Erdogan, on the other hand, was left to two former US ambassadors to Turkey, now retired, to express. In a Jan. 23 opinion piece for the Washington Post, Morton Abramowitz and Eric Edelman, co-chairs of the Bipartisan Policy Center's Turkey Initiative, along with Blaise Misztal, the center’s acting director, did not mince words.

They argued in a piece titled “The United States needs to tell Turkey to change course” that denunciation by Erdogan — who they said “is destroying his country’s parlous democracy” — of "supposed US meddling" in Turkey was putting Washington in a difficult position.

"US policymakers should lay aside their reluctance to confront the disastrous impact of Erdogan’s dictatorial tendencies and remind the Turkish leader of the importance the United States attaches to Turkey’s political stability and democratic vitality," they wrote.

Their sentiment was later echoed by a Jan. 27 New York Times editorial titled “Turkey’s Wrong Turn.” “Once hailed as the leader of a model Muslim democracy, [Erdogan] has created a political disaster at home, transforming Turkey into an authoritarian state that poses dangers not just for itself but for its allies in NATO, including the United States.”

The New York Times added that the "Obama administration also needs to send a strong message about the damaging course Mr. Erdogan is pursuing," and, “Whether Turkey nurtures its hard-won democracy, which has contributed to its impressive economic growth, or turns authoritarian is as critical to regional stability and to its NATO allies as it is to Turks."

The Obama administration will likely maintain its cautious diplomatic stance until things settle down in Turkey. That could take time, though, given that the election period that starts at the end of March will only end in 2015, unless early elections are called.

Meanwhile, Gokcek’s remarks show that the AKP is determined to work this hobbyhorse. It is therefore unlikely that Obama will be picking up the phone anytime soon. As for Davutoglu and Kerry, who meet from time to time, they will try and do their best to contain the situation.