The United States may be rankled, however, by the Turkish prime minister implying that Washington was part of international conspiracy behind the corruption scandal. 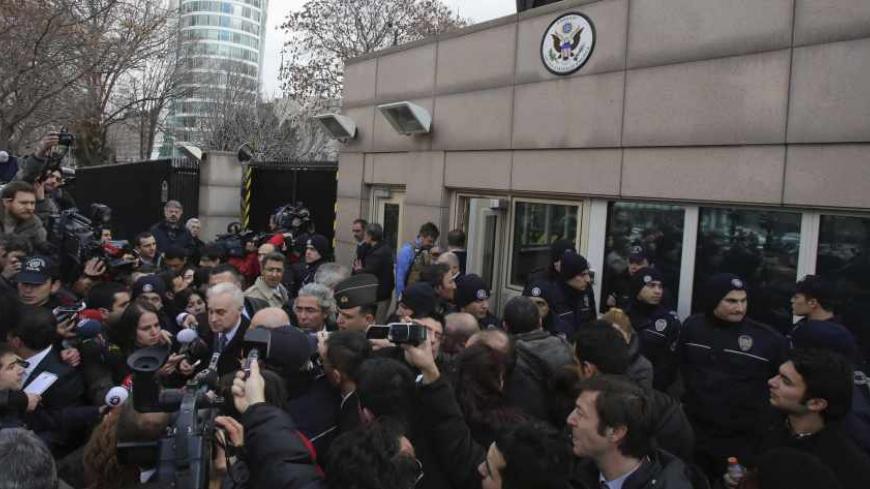 US Ambassador to Turkey Francis Ricciardone Jr. (L, with white hair) speaks to media outside of the US Embassy in Ankara Feb. 1, 2013. - REUTERS

The massive corruption probe that has left Prime Minister Recep Tayyip Erdogan with the most damaging crisis of his political career has started to spill over into Ankara’s relations with Washington. A crisis between the two countries has been averted for now, following intense diplomatic contacts, but Western diplomats have confirmed to Al-Monitor that patience with Erdogan is running thin on the American side, where officials are threatening dire consequences to relations should he continue in this vein.

Never the one for diplomatic niceties or sensitivities when it comes to politicking, Erdogan has latched on to reports in Turkey targeting US Ambassador Francis J. Ricciardone Jr. in connection with the current probe. After accusing the ambassador, without naming him, of engaging in “provocative actions,” Erdogan even threatened to send him packing. Erdogan’s attack followed an orchestrated and concerted assault on the ambassador by pro-government media trying to deflect attention from the government after news of the corruption scandal hit the headlines on Dec. 17. Days later, on Dec. 21, Aksam, Star and Yeni Safak accused Washington, in large print, of being behind the probe that has left four government ministers under suspicion.

Washington was said to be angry with Turkey for circumventing sanctions on Iran by buying oil from Tehran and paying in gold cleared through the government-owned Halk Bank. The CEO of the bank has been arrested for taking bribes and is facing a trial after millions of dollars were found in shoeboxes in his home.

According to the papers above, Ricciardone told the EU ambassador in Ankara the day the scandal broke that Washington had warned Turkey to cut its ties with Iran. “They did not listen to us. You will now watch the fall of the empire,” Ricciardone allegedly said.

Erdogan has trotted out his usual accusations when he finds himself in a difficult political situation, claiming once again that there is a conspiracy against his government by international forces and their lackeys in Turkey. Such accusations invariably involve the United States and Israel in one form or another. A day after news of the corruption probe became public, Star claimed that Mossad, the Israeli intelligence agency, had unleashed the scandal to undermine Erdogan and his government.

The massive corruption probe currently under way has seen the arraignment of the sons of three ministers, with two of them being sent to prison, while the third awaits trial for involvement in the scandal. Al-Monitor’s Turkey Pulse has provided full coverage of the scandal.

Acting without questioning the veracity of the reports in the pro-government media, and thus fueling suspicions that his government is behind them, Erdogan blasted at the American ambassador over the weekend during an address to supporters in the Black Sea city of Samsun. “Look at these past few days, it is very interesting. Ambassadors are engaged in provocative actions. I call on them from Samsun: Do your jobs. If you exceed the boundaries of your jobs, then this will go as far as falling under the responsibility of our government. We are not forced to keep you in our country,” Erdogan said, using highly charged language.

Erdogan did not name Ricciardone, but few had any doubts as to whom he had in his crosshairs. Ricciardone, for his part, wasted no time in responding. He declared in Turkish, which he speaks well, on the embassy’s Twitter account that he had not attended any meeting with European Union ambassadors, as alleged, adding that the claims being made were slanderous. Ricciardone went on to say, “No one should endanger US-Turkish relations with unfounded claims.” These words were taken by many as targeting Erdogan. Ricciardone added, “The friendship and cooperation between the US and Turkey is vitally important for both sides.”

US officials are reportedly angry, not just by Erdogan’s remarks, but also remarks by other ranking members of his Justice and Development Party. Talking to reporters on the day the allegations about Ricciardone appeared in the press, Suleyman Soylu, a deputy head of the party, accused the American ambassador of acting like a colonial governor. “I would like to remind him that this is not a colonial country, and he is not a colonial governor,” Soylu said. “Turkey is not a country that can be made unstable by trickery and plots,” he added, going on to list Afghanistan, Egypt, Iraq and Vietnam as countries against which the United States had conspired.

Ricciardone is not issuing any further comments on the matter. The Turkish Foreign Ministry released a brief statement after Ricciardone’s tweet, saying the ambassador’s words had been sufficient and that he would not be called into the ministry for an explanation.

Ankara and Washington have refuted claims in the pro-government media that Foreign Minister Ahmet Davutoglu’s recent phone discussion with Secretary of State John Kerry had to do with remarks attributed to Ricciardone, countering that Syria, Iran and Iraq were discussed. Western diplomats contacted by Al-Monitor say that although the United States is used to unfounded remarks from the upper echelons of the Turkish government and ruling party by now, they have started to grate on nerves in Washington, where not everyone is happy about Turkey’s Middle East policies.

This not the first time that Erdogan has fired at Ricciardone, of course. Shortly after he was appointed in January 2011, Erdogan chastised Ricciardone over critical remarks he made about press freedom in Turkey. Erdogan called the newly appointed ambassador a “rookie” who, he said, “did not know much about Turkey.” Erdogan also angered Washington over insinuations this summer that the United States was part of the “international interest-rate lobby” allegedly behind the Gezi Park protests. Erdogan’s remarks followed criticism by the Barack Obama administration for his handling of the protests. Washington was further annoyed when Erdogan accused Israel of planning the coup in Egypt and made its displeasure clear in official statements.

Meanwhile, Turkish media reports citing US officials in Washington are also corroborating Western diplomats who say that patience with Erdogan is running thin. Washington correspondent Toga Tanis quoted a senior US State Department official in his Dec. 24 article in Hurriyet as saying the United States did not want to increase tensions with Turkey because it would have negative consequences for ties. The unnamed official stressed, however, that Washington would not allow its ambassador to be attacked in this way and expressed concern over the effect negative Turkish media reports would have on already rife anti-Americanism in Turkey.

Hurriyet also quoted Noel Clay, a deputy spokesman for the State Department, as expressing dissatisfaction with these reports. Clay offered, “Attacks by certain elements of the Turkish media against our ambassador, representatives of the international media and American individuals and quarters are extremely disturbing.” Vatan also cited angry remarks by a US State Department official on the same day as the Hurriyet report, warning about the potential damage to relations and expressing hope that Ankara would condemn unfounded media allegations and oppose efforts to harm vitally important ties between the two countries.

It remains to be seen whether Erdogan will be able to restrain himself and heed these remarks, given the desperate situation he finds himself in politically with this corruption probe, which emerged unexpectedly with critical local elections are just around the corner. What is clear, however — now that the European Union has criticized Erdogan over his handling of the probe — is that this scandal is going to give him a major headache at home and abroad just when he needs it least.