Following its corruption scandal, Turkey's relations with Arab states, the United States and Europe have undoubtedly been affected, though no immediate foreign crisis has arisen. 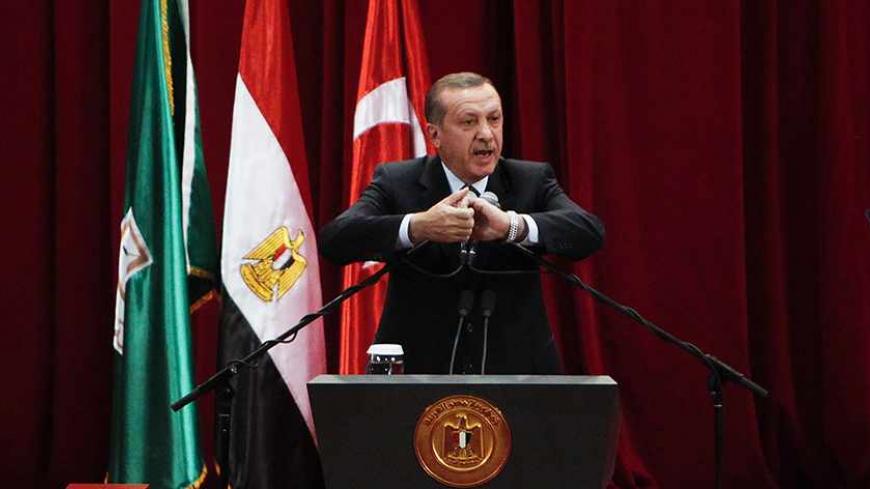 Turkish Prime Minister Recep Tayyip Erdogan is faced with a crisis that could scuttle his political career at the very moment he felt himself to be politically invincible. He has been left now with little choice but to concentrate all of his energies on trying to bolster his government’s credibility at home at a time when critical local elections are around the corner. Diplomats in Ankara are also wondering how all this will affect Ankara’s foreign policy goals.

The massive corruption scandal, involving tens of millions of dollars, which has implicated four key ministers — all of whom have lost their jobs — is moving in a direction that could also involve members of Erdogan’s family, particularly his son Bilal whose name has started being bandied around in the press.

The damning press statement by Muammer Akkas, the investigating prosecutor, on Dec. 26, in which he said the case had been taken away from him after he issued warrants for a second wave of arrests in the corruption probe, has made matters worse for Erdogan. Many suspect the government used its influence to take the case from Akkas to prevent the investigation going further and reaching members of Erdogan’s family.

Meanwhile, three ministers under suspicion have been forced by Erdogan to resign. One of them, Urban Planning and Environment Minister Erdogan Bayraktar did so, however, only after implicating Erdogan and calling on him to resign also. EU Minister Egemen Bagis, the fourth minister under suspicion who refused to resign, was dismissed in Erdogan’s cabinet reshuffle of Dec. 26, which saw 10 ministers changed.

“We have weeded out the bad among us,” Erdogan said after announcing his new ministers. Al-Monitor’s Turkey Pulse continues to provide details on the scandal and its political fallout.

Diplomats sounded out by Al-Monitor in Ankara are trying to gauge now what all this will mean for Erdogan’s political future, coming at a time when he hoped to strengthen his political base in local elections at the end of March and get elected president in July 2014.

Diplomats also appeared united in the belief that most of the current leaders in the Middle East are unlikely to be shedding too many tears for Erdogan as he faces these difficulties. Many of these leaders have a personal animosity toward him, which is mostly the result of Erdogan’s own bellicosity toward them in the past.

It is also clear to these leaders that a Turkey preoccupied with a domestic crisis of this magnitude will be unable to play a major role in the Middle East at a time of crucial regional developments. Looked at from the eyes of Iraq’s Prime Minister Nouri al-Maliki, Syria’s President Bashar al-Assad, Egypt’s Gen. Abdel Fattah al-Sisi and Israel’s Prime Minister Benjamin Netanyahu, this is not an unwelcome prospect.

These leaders have been vilified by Erdogan at one time or another and are wary of Turkish meddling in the region, especially where this was openly seen to be along sectarian lines and in favor of the Muslim Brotherhood. Erdogan’s open support for the Muslim Brotherhood has also angered regional Sunni powers headed by Saudi Arabia.

Aware of how Turkey’s regional credibility is on a downward spiral, Foreign Minister Ahmet Davutoglu has been pushing Erdogan’s claim that Turkey is faced with an international conspiracy aimed at undermining the successes of the ruling Justice and Development Party (AKP).

Maintaining that “the revolution” by Turkey in its region had “disturbed some,” Davutoglu said in an address to the Turkish Exporters Assembly (TIM) on Dec. 25, “Turkey’s rising trend will continue no matter who says what.”

It is not clear what Davutoglu means by “Turkey’s rising trend,” when the opposite is true with Turkey becoming increasingly isolated in the Middle East due to a series of policy mistakes and miscalculations.

“The Turkey we have in our mind is a Turkey that is in peace, based on people’s sovereignty, accountable only to its own nation, integrated with its neighbors and which makes itself talked about across the world with its policies, culture and economy,” Davutoglu added.

The latest corruption scandal may have provided breathing space for Erdogan’s rivals in the Middle East, but it has already shown it has the potential to cause turbulence in Turkey’s ties with the West, too.

Erdogan’s claim that he is faced with an international conspiracy is generally taken in Turkey as targeting the West, and especially those countries which stand behind Israel, meaning the United States.

Attacks by the pro-government media against the US ambassador to Turkey, Francis Ricciardone, which connected him with this corruption scandal, have already been reproached by Washington. Taking its cue from Erdogan’s claim about an international conspiracy, the pro-government media have alleged that it is the United States — with help from Mossad — which pressed the button to unleash this scandal.

The United States and Israel did this, according to these reports, because of Ankara’s business dealings with Tehran that violated US sanctions. These papers also claimed that Ricciardone had told EU ambassadors in Ankara, after the corruption probe was revealed on Dec. 17, that Erdogan’s empire was crumbling.

Ricciardone and Washington denied these allegations and called on the Turkish government not to lend any credence to such reports. “The continued baseless attacks by some elements of the Turkish media against US Ambassador to Turkey Francis Ricciardone, other senior US officials, international media representatives and private American citizens and groups are deeply disturbing,” US State Department spokeswoman Jen Psaki said in a press statement on Dec. 24.

“We have made known to Turkish authorities our concerns about such allegations regarding American officials. Turkish officials have assured us that they do not credit such false accusations against individual American officials, including Ambassador Ricciardone,” Psaki added.

A crisis between Ankara and Washington has been averted for now, after reassurances by Turkey, but diplomats say the US side remains on alert given Erdogan’s proclivity for off-the-cuff accusations based on unsubstantiated media reports.

European diplomats are also bracing for trouble after the European Union expressed displeasure with the way Ankara has been handling the scandal, calling on the Erdogan government to respect the rule of law and not interfere in a corruption probe.

Stefan Fule, the EU’s commissioner for enlargement and European neighborhood policy, expressed “serious concern” over the legally questionable steps taken by the Erdogan government in an apparent effort to shield against corruption allegations.

“The latest developments, including the sacking of police chiefs and the instructions to police to inform authorities on investigations, raise serious concerns in regard to the independence, efficiency and impartiality of the investigations and the separation of powers,” Fule’s spokesman Peter Stano said in a statement on Dec. 24. “This further highlights the need for establishing a proper judicial police, as already recommended by the EU,” Stano added.

Stano also issued a statement on behalf of Fule, after arrests in connection with the corruption probe started on Dec. 17. He pointed out that the EU Commission was underlining the need to guarantee the independence and impartiality of the judicial process.

“The commission has noted the government's vow not to intervene in the probe and stand behind the judiciary in the investigation, and recalls the responsibility of the relevant authorities to investigate allegations of wrongdoing in an impartial manner,” Stano said.

Diplomats say Erdogan could lash out against the EU in the coming days because of such criticism, as he goes on the campaign trail to try and disperse the heavy clouds gathering over him and his party by railing against international conspiracies.

Such expectations are not unjustified given that Erdogan has shown, on more than one occasion, that he is not putting his domestic political interests above Turkey’s foreign policy interests, by using the latter to bolster the former.