The government of Turkish Prime Minister Recep Tayyip Erdogan claims a foreign plot is behind the corruption charges. 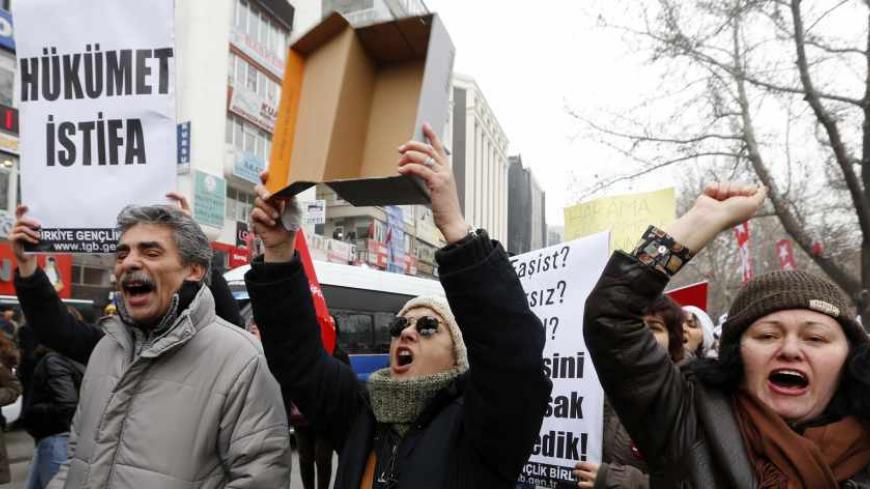 A demonstrator holds a shoebox in reference to what the media said are shoeboxes of cash found in the house of Halkbank CEO Suleyman Aslan, during a demonstration against Turkey's ruling party and Prime Minister Recep Tayyip Erdogan in Ankara, Dec. 21, 2013. The sign reads: "Government has to resign.'' - REUTERS/Umit Bektas

Since a secret two-year graft probe hit the surface on Dec.17 — bringing into the spotlight allegations that three sons of cabinet members in a close-knit network abused their fathers’ power and received bribes, tearing apart the government’s self-declared presumption of innocence in the fight against corruption since it came to power over a decade ago — Turkish Prime Minister Recep Tayyip Erdogan has been on the offensive attempting to paint the scandal as a foreign plot against his government.

Speaking in Giresun, a Black Sea coastal city, on Dec. 22, Erdogan said, “In the last week, certain power centers in the security establishment have started to implement a conspiracy plot. They are setting a very illegal, ugly, and a very dark trap hidden behind corruption allegations.” He argued, “Turkey has lowered interest rates in the past 11 years and earned 642 billion [Turkish] lira [$307 billion]. The interest rate lobby is now enraged because this money would have been in its pockets. It lost that 642 billion lira. That is the issue. It wants to get back that money it lost in interest rates. It wants to rob and exploit Turkey.”

Erdogan had claimed during the Gezi Park protests that the interest rate lobby had encouraged people to take to the streets to oppose the government’s decision to turn one of Istanbul’s last green spots into a shopping mall. Although it has not been clear as to whom exactly Erdogan was alluding to by that interest rate lobby, it has been widely perceived to mean pro-Israel organizations in the United States.

In Ordu, another Black Sea coastal city, he said on Dec. 21, “This international plot has its roots abroad. [Local] people are used as subcontractors. Just as we spoiled their game at Gezi [park protests in June], we will spoil their game this time, too. Their slander campaign continues.” He added, “What did you want from Halk Bank? … This bank steps on the feet of the interest-rate lobby. Turkey’s enemies fear this bank. As long as God gives us health, we will explain this truth to everyone. Our nation is well-aware of this game, but we will also continue talking about it.”

And in Samsun, yet another Black Sea coastal city, he raised the possibility of expelling Francis Ricciardone, the US ambassador to Turkey. “Ambassadors are engaging in some provocative actions. I am calling on them: Do your job. We are not obliged to keep you in our country. If our ambassadors engaged in such plots in your countries, we would withdraw them before you did that.”

Just a few hours after that statement hit the news, Ricciardone released a written statement not in answer to Erdogan’s statement, but rather addressing news reports that appeared on the front pages of three pro-government dailies — Yeni Safak, Star and Aksam on the same day, Dec. 21. These dailies claimed that Ricciardone told European Union member countries’ ambassadors in Ankara on Dec. 17, the day a large operation took place to make arrests in the bribery scandal, “We told them to cut their relations with Iran. They did not listen to us. You will now watch the fall of the empire.” Ricciardone wrote in response, “The United States is in no way involved in the ongoing corruption and bribery operation. … Nobody should put Turkey-US relations in danger with unfounded claims.” The Turkish Foreign Ministry toned down these tit-for-tat responses between Erdogan and Ricciardone, stating that there is no reason to summon the US ambassador to the ministry for any kind of warning, and that it was satisfied with his answer. Yeni Safak, however, did not seem convinced and claimed today, “in diplomatic circles, the view that prevails is to declare … [the US ambassador] as persona non grata.”

You have to read Turkey Pulse columnist Kadri Gursel’s article on Dec. 19 to have a detailed view of the seriousness of this corruption and bribery saga. Although the Erdogan government is desperately trying to paint itself as the victim of an incredible international plot targeting Turkey, arguing that big powers started to get jealous of and disturbed by Turkey’s unmatched success, specifically in its economy, it fails to answer one simple question. If government officials are sure of their innocence, why does Erdogan still keep Interior Minister Muammer Guler — whose son Baris Guler was  arrested as a result of a court order for allegedly accepting a bribe — and allow him to reassign police chiefs, department heads and their deputies who played crucial roles in this investigation? If this does not seem like the government using its authority to cover up a scandal, what is?

And it might be better to focus on the allegations in the case rather than on an alleged international plot. Until the court decides, it surely is wrong to convict the accused, but it might be more worthwhile to take a more cautious approach in claiming the innocence of those involved. Instead of claiming that the United States or Israel are behind the plot, why not question why Suleyman Aslan, head of state-owned Halkbank, was found hiding $4.5 million in shoeboxes in his house in Ankara? He claimed that the money was raised to build a religious vocational high school. If so, why is there no voucher to show who gave that money, and why is that money kept in shoeboxes instead of a bank account?

The more government officials fail to provide answers to such key questions, the more they seem to be pointing the finger at the Unietd States as well as Israel as plotters against Turkey. Erdogan adviser Yigit Bulut, for example, argued on Dec. 21, “Despite Israel’s warning, Halkbank was providing an essential lifeline to Iran. With the transfer of the money that the bank made, Iranians were buying medicine for children. We were expecting an international plot against Halkbank for some time. No one claims whether there was corruption or not. But when you put these anomalies one after another, you see that there is an international plot against Turkey. It started with the Gezi [Park protests] and continues with this one.”

However, it is quite important whether there was corruption or not. And if any outside power aimed to benefit from such a shameful scandal, it still would be the mistake of those who engaged in corruption and bribery — not the other way around.

For an Islamic-based government, however, it is easier to accuse the United States and Israel. Erdogan had also claimed Israel had a role in toppling ousted Egyptian President Mohammed Morsi, and that Turkey had the “evidence” for that. In August, White House spokesman Josh Earnest said those comments were “offensive and unsubstantiated and wrong.” What forced Ricciardone to release the written statement cited above is also no different than that case, which could also drive others to conclude that the Erdogan government is trying to implement a well-crafted policy to distance Turkey from its long time strategic allies for a different kind of political project. While it’s up to the people to decide whether they sign up for such domestic political engineering in the first place or not, one could only hope that the constituency would act more responsibly than ever now in the face of such serious corruption allegations, and demand to know the truth.