Turkish Prime Minister Recep Tayyip Erdogan has vowed to break the "dirty alliance" at the core of the crackdown. 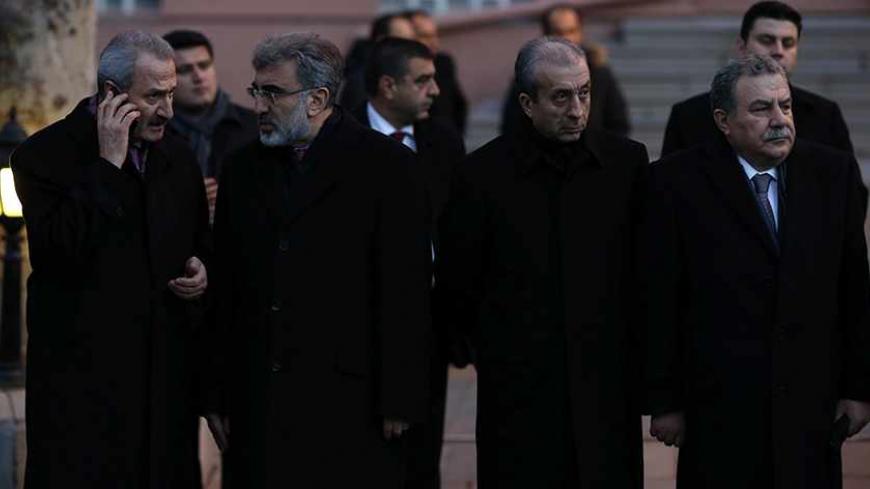 The easiest way in Turkey to get out of a difficult political corner, especially if you have Islamist leanings, is to point at Israel as the country orchestrating developments you don’t like. This is not to naively suggest that Israel does not interfere in the affairs of other countries in an effort to arrange things to its advantage. But to see a Jewish or Israeli hand in every Turkish crisis has become a knee-jerk reaction, even in crises that are blatantly home grown.

The massive corruption probe that went public Dec. 17, the fine details of which have been amply covered by Al-Monitor’s Turkey Pulse, has shaken the Turkish government to the core when crucial local elections are just three months away and presidential elections are due to be held later in the year.

To have four ministers implicated in a bribery scandal involving tens of millions of dollars, a shady Iranian businessman, the head of a government bank, a mayor from the ruling Justice and Development Party (AKP) and prominent housing contractors who work closely with the government is a political tsunami for Prime Minister Recep Tayyip Erdogan.

Erdogan is fully aware that he has few options, if any, that will make him look good as this scandal unfolds. The firing of so many police chiefs by his government after news of the corruption probe broke and the appointment of “supplemental” prosecutors to the case already looks bad for him.

Erdogan has decided to brace himself against all criticism and declare war on the “gang” — to use his term — that he claims has lodged itself in the bowels of the state where, together with its international connections, it allegedly plans such operations against the government.

Addressing a crowd in Konya, Central Anatolia, on Dec. 17, shortly after the arrests in connection with the probe started, a visibly angry Erdogan claimed there was a “dirty alliance” against Turkey, saying, “Those who have the power of capital and the media behind them can't change the direction of this country.”

He said that those who planned this operation were both outside and inside Turkey, adding, “You can guess who they are. This was a process that started with Gezi Park, and now they have taken a new step,” he claimed.

The culprit for Erdogan behind the Gezi Park protests in June, which left him and his government in a negative light internationally, was a curious “interest-rate lobby.” He alleged this lobby was trying to undermine Turkey’s economic and political successes. The pro-government media made sure that this was understood to be an essentially Jewish lobby.

Having taken its cue from Erdogan’s remarks, this portion of the media is doing the same again by using convoluted arguments to bring in the Israeli and Jewish angle. The Star newspaper, for example, claimed Dec. 18 that Turkey’s oil transactions with Iran, for which Halkbank — the government bank implicated in the current probe — was used, was the reason the Mossad had launched the probe.

Given the way the Turkish lira melted against the dollar and the stock market went into heavy turbulence over news of the scandal, it will not be surprising to hear Erdogan revive the “interest-rate lobby” argument or something similar in the coming days. It is also apparent that Erdogan can not risk a normalization of ties with Israel at a time when the pro-government media, with prompting from government circles, is claiming that Israel is involved in a conspiracy against his government.

Meanwhile, pro-government papers are also trying their utmost to downplay the details of the corruption probe being leaked to the media and undermine some of the most damaging of the revelations. The flow of damning claims, however, appears unstoppable. What is certain at this stage, despite government-orchestrated efforts to deflect attention by using Israel and other such arguments, is that Turkish Islamists have drawn swords on each other. Judging by Erdogan’s remarks, the AKP and the Gulen movement are readying for a bitter and mutually destructive war.

Both come from the same base and have supported each other in the past. But they have not seen eye-to-eye on a number of issues, and their rivalry boiled over recently after the government’s decision to close down prep schools, many of which were run by the Gulen movement. Kadri Gursel’s post for Al-Monitor's Turkey Pulse on Nov. 18 provides the background to this rivalry.

The Gulen media, headed by Zaman and its English-language version Today’s Zaman, is adamant that the probe reveals a corruption story that implicates government ministers and demands that the truth is revealed. Other media organs that are free of government control are also following this line. The pro-government media, however, is claiming a grand conspiracy against Erdogan.

With one part of the Islamist media claiming an international conspiracy, and the other saying this is a corruption scandal pure and simple, grass-roots followers of the AKP are confused. If Israel is behind the current scandal — as some in the pro-government camp claim — this means Fethullah Gulen, whose supporters in the police and judiciary allegedly initiated this probe, is in collusion with a country that is universally vilified by Islamists.

Many AKP supporters who are sympathetic toward Gulen will find this hard to accept. It is telling in this regard that all the accusations coming from official AKP quarters refer to the Gulen group indirectly, without naming it. When asked if they mean the Gulen group, government spokesmen deny it. The closest they get to naming Gulen is to point to a gang in the state apparatus that uses the group’s name.

This clearly shows that the Gulen issue is a sensitive one within AKP ranks also. This was brought home in a striking way on Dec. 16, when Hakan Sukur — one of Turkey’s most revered soccer stars, who never hid his closeness to Gulen — resigned from the AKP after criticizing Erdogan over the issue of the prep schools. Sukur was elected as AKP deputy after Erdogan invited him to the party in June 2011.

Given the magnitude of the potential damage to the government, Deputy Prime Minister Bekir Bozdag is leading efforts to get a news blackout imposed on the current corruption probe. Bozdag is also claiming on his Twitter account that this probe is designed to harm the AKP’s chances in the local elections as well as Erdogan’s chance of being elected president.

Such remarks, when combined with Erdogan’s angry words, show Turkey is heading for a tense and turbulent period politically, with negative economic consequences that are already being felt. This will also undermine an inward-looking Ankara’s capacity as a regional player at a critical moment in the Middle East.

Fighting and surviving this domestic war nevertheless appears to be of existential importance for Erdogan, who seems to be less concerned presently over the instability his war with the Gulen group and others he considers his enemies will create for the country.

Otherwise, he would have demanded the immediate resignations of the ministers implicated and supported the rule of law, instead of pushing the international conspiracy line. Some are even suggesting that in a normal democracy, Erdogan would have also resigned after such a scandal. But that is expecting too much from today’s Turkey.