Erdogan tries to shake Sisi comparison as elections near

The legacy of the Gezi Park protests, the Kurdish opening and tensions with the Gulen movement are generating a disparate opposition to Turkey's prime minister. 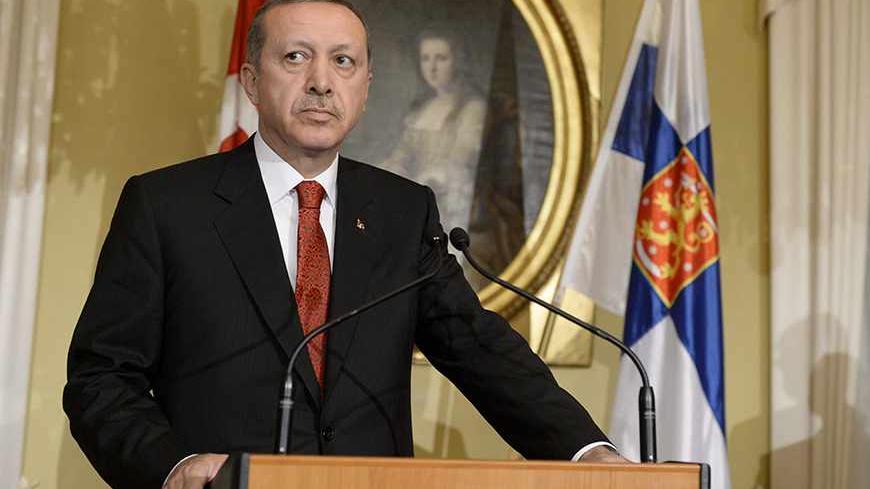 With only four months left before critical local elections, an increasingly beleaguered Prime Minister Recep Tayyip Erdogan is trying to shake the negative image that has become stuck to him as an uncompromising and authoritarian leader who uses heavy-handed methods against his political rivals as well as those who do not share his worldview.

On the surface, Erdogan still appears strong, self-confident and unbeatable in any election. Few dispute that he is poised to remain a key figure on Turkey’s political landscape for some time yet. But his is no longer the smooth sailing it was a number of years ago, when he appeared untouchable. Today, there are indications he may be losing his magic, especially now that his opponents span a spectrum ranging from the Gezi Park youth to members of the Islamist Gulen Movement, led by the influential religious leader Fethullah Gulen.

The National Movement Party, meanwhile, is campaigning hard against Erdogan because of his “Kurdish opening,” which nationalists oppose. They claim Erdogan is betraying the Turkish nation and are doing their utmost to add the stigma of treachery to his already tarnished image. Like religion, nationalism also runs deep in Turkey. Erdogan was playing to the nationalist gallery a mere year and a half ago, threatening to have deputies from the pro-Kurdish Peace and Democracy Party (BDP) expelled from parliament. Today, however, he has changed tack and is cooperating with the BDP to resolve Turkey’s Kurdish problem.

Erdogan knows that he must successfully finalize his efforts to make peace with the Kurdistan Workers Party, the group that has been waging a 30-year separatist war within Turkey. He is also aware that he has to do this in a manner that disarms his nationalist rivals in the Anatolian heartland.

Erdogan is therefore canvassing hard for public support for his Kurdish policies, knowing that many even within his party are wary of them. If Erdogan fails to make serious headway on this issue in the run-up to elections, it will work to his political disadvantage.

Many see Erdogan’s courting of the Iraqi Kurds and his recent high-profile hosting of Kurdistan Regional Government President Massoud Barzani in Diyarbakir in this light as well. There is of course the energy-cooperation dimension with northern Iraq, too. But Erdogan is also trying to garner Kurdish support in Turkey in this way to compensate for a loss of support from other quarters.

Meanwhile, the government’s failure to bring the 2020 Olympics, as well as the World Expo that same year, to Turkey dealt Erdogan another blow at a critical political moment. He was overly confident that the Olympics in particular would go to Istanbul, and therefore put a lot of eggs in that basket, only to be deeply disappointed when the games went to Japan.

Given the massive construction projects the event would have entailed, Erdogan was clearly hoping the Olympics would bring him an added boost on the eve of  local elections in March. He also has an eye, of course, on next year’s presidential elections and the parliamentary elections due to be held in 2015.

Erdogan has long relied on spectacularly large projects to silence his critics, as was apparent in the fanfare arranged by the government a few months ago for the ground-breaking ceremony for a third suspension bridge over the Bosporus. The same tactic was witnessed recently during the inauguration of the Marmaray railway line that unites the European and Asian sides of Istanbul under the Bosporus.

Erdogan’s mishandling of Turkey’s foreign policy following the Arab Spring has also left many questioning his competence as an international leader, a particularly hard pill for Erdogan to swallow given that he was listed as one of the most influential foreign leaders when he assumed the premiership in 2003.

The resetting of Ankara’s foreign policy priorities, which is currently under way and aims to place Turkey back in the Middle East as a key player, has inevitably provided grist for the mill of Erdogan’s domestic and foreign opponents. The opposition in Turkey frequently highlights that Ankara, which set out to have “zero problems with neighbors” under Erdogan, is left today with hardly any friendly neighbors due to a series of foreign policy miscalculations by the government.

Meanwhile the, government’s mishandling of the Gezi Park protests this summer energized an unprecedented nationwide opposition to the ruling Justice and Development Party (AKP) and seriously damaged Erdogan’s international reputation.

Erdogan’s close associates are livid today that Time magazine has him currently listed immediately after Abdel Fattah al-Sisi in its “Person of the Year” survey for 2013. This lineup seems to put Erdogan in the same category as the anti-democratic leader of the Egyptian coup. The list is arranged in alphabetical order, but Erdogan supporters still see an affront.

“Time deploys a survey as means of black propaganda; something even the [Syrian President Bashar al-]Assad regime's propaganda machine failed to think of,” an angry Culture and Tourism Minister Omer Celik tweeted on Nov. 30, claiming that “placing our PM against Sisi in Time” was another stage of the international conspiracy against Turkey.

To have two prominent ministers attacking a foreign magazine in this way clearly shows how touchy AKP members currently are. Many in the AKP still believe there is a Jewish-led international “interest-rate lobby” that is committed to undermining Erdogan’s political success as a leader.

To be associated with Sisi is particularly annoying for Erdogan, as he has based his support for ousted Egyptian president Mohammed Morsi and the Muslim Brotherhood, as well as his vitriolic opposition to the Egyptian military, on democratic arguments.

Many Turks and observers of Turkey, however, believe that Erdogan and Sisi are similarly merciless against anti-government protesters, differing only in degree. Erdogan and his ministers are also angry that the United States and the European Union remain critical of the government’s handling of the Gezi protests and have issued reports to this effect.

Meanwhile, relations between the AKP and the Islamist Gulen group have taken a nose dive and become a political feud. The sides are exchanging angry barbs over the government’s decision to close down prep schools, including many that belong to the Gulen movement.

Ties between Erdogan and Gulen were further strained after Taraf revealed in a recent scoop that the AKP government had acted with the secular Turkish establishment in 2003 to undermine the Gulen movement. Al-Monitor’s Turkey Pulse has been following the subject. providing details about this ongoing confrontation. The bottom line is that this rivalry has left Erdogan looking heavy handed and uncompromising in the eyes of a segment of society that shares his Islamic worldview and would under normal circumstances support him.

Nothing said here is meant to suggest that Erdogan is on the way out. But there was a time in the recent past — in particular, after he swept the June 2011 elections by winning one out of every two votes — when Erdogan would not have had to worry very much about his image. Today, that seems to be changing.