US stays out of Turkish politics

Former US ambassadors to Turkey and Turkish analysts in Washington are following Turkish politics with interest, although Turkey is not a priority for US foreign policy given developments in Ukraine and elsewhere. 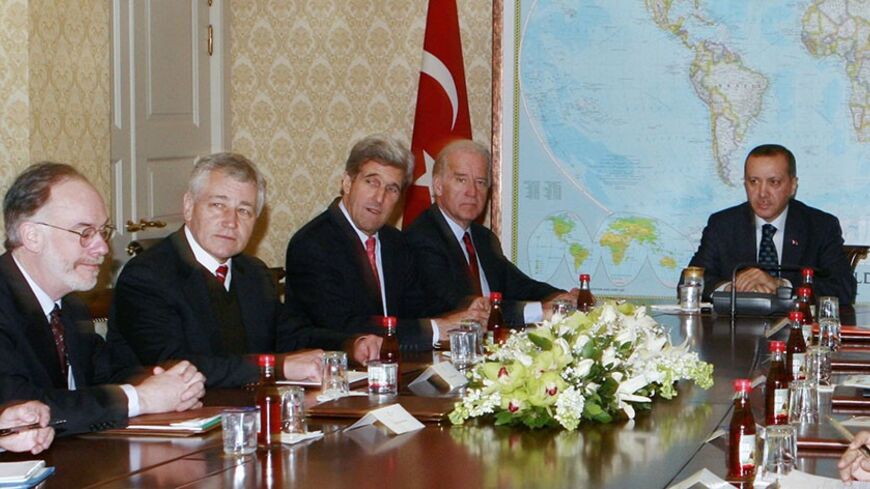 WASHINGTON — In the US capital, Turkey is still considered a relatively stable country in its region despite the judicial investigation made public three months ago that has put Turkish Prime Minister Recep Tayyip Erdogan, his family and other members of the Justice and Development Party (AKP) under pressure for alleged direct involvement in a massive corruption and bribery network; despite the government’s unprecedented application of power to prevent a deepening of the graft probe, and despite the endless stream of leaked audio tapes allegedly exposing the government’s murky deals in action.

While there may be concern over the deteriorating rule of law in Turkey and the anti-American narrative recently adopted by Erdogan, events in Turkey are not categorized as a pressing crisis, unlike the situation in Ukraine.

“The prime minister does things all the time that we scratch our heads over,” said James Jeffrey, a former US former ambassador to Turkey (2008-2010), speaking to Al-Monitor at a March 7 event on Turkey at the Washington Institute for Near East Policy. While defining Turkey’s importance “not as a model country but as an island of relative stability,” Jeffrey touched on the issues raised above.

“[Erdogan] can make the case to some degree that, OK, even if he was involved in corruption, and even if he has kind of stamped out independent media, there is a cabal of people who do not answer to the government, state or other religious group that is after him,” said Jeffrey, alluding to the US-based Sunni cleric Fethullah Gulen and his followers, whom Erdogan has accused of having formed a parallel state in Turkey in an attempt to bring him down. Jeffrey added, “There are times when countries fall off the wagon on the move toward [true democracy], and there are risks Turkey could do this. Again, we have to trust Turkish people. They know what’s going on. They’re evaluating all of this.”

Ross Wilson, another former US ambassador to Turkey (2005-2008), sounded cautious about developments in Turkey. “The wheel of politics turns in Turkey just like it turns everywhere else. And the results of the March 30 municipal elections may well surprise. Turkish voters will figure this out. We should be confident about that. We should be concerned about the [deteriorating rule of law in Turkey],” Wilson told Al-Monitor at the Washington Institute for Near East Policy event.

Wilson furthered noted, “The attack on Frank [Ricciardone Jr., the current US ambassador to Turkey] generated an immense amount of resentment here in Washington. I think some of that, or a lot of that, has been patched back together. I hope so. It does a huge disservice to our relations. It’s critical to the success of Turkey and to the government in Ankara.” Erdogan had suggested expelling the US ambassador days after the graft probe surfaced on Dec.17, implicitly blaming the Americans for orchestrating the allegations.

In contrast, just 10 months ago, the US-Turkish relationship appeared to have reached a new peak. For Erdogan's visit to the White House on May 1, the Obama administration extended an exceptional welcome, unlike any offered previously to a Turkish prime minister. This was not only a matter of protocol. Indeed, the content of the conversations held signaled a new beginning in cooperation, intimacy and communication. It was also the first time that a Turkish intelligence chief had attended a meeting at the White House.

The two sides agreed to enhance cooperation over the Syrian conundrum and most likely on other issues as well. Less than two weeks later, however, Erdogan’s hysterical reaction to the Gezi Park protests caught the Obama administration by surprise. That shock was then followed by the Turkish prime minister’s anti-American vitriol, which gradually dragged the US-Turkish relationship to new lows. Erdogan's actions were perceived as a shift from treating the United States as a strategic ally to stabbing it in the back.

Jeffrey believes that Turkey has miscalculated its political capital in the region, in particular in Syria and Egypt. He contended, “We realize that soft power and regional prominence do not necessarily get you the kind of influence where you can pick up the phone and tell the president of a neighboring country to please step down or to call the generals in a third country and say please don’t let your tanks roll. It does not work that way for us or for the Turks.”

Wilson agreed with Jeffrey's assessment, noting, “The limits of Turkish power has become stark. If not policy failures, they did not work out very well.” He added, “Turkey is not a superpower, but one should not exaggerate those limits or exaggerate Turkey’s failings or difficulties in the region. It’s an influential country. Its power is substantial and it’s unique.” He described Turkey as “dynamic, turbulent, confusing, confounding, frustrating, irritating, tough to figure out.”

Sources told Al-Monitor that the Obama administration was confused by Turkey's decision in September 2013 to select the China Precision Machinery Import and Export Corp (CPMIEC), a firm under US sanctions, for its anti-missile defense system, worth $3.4 billion. Turkey, a member of the North Atlantic Treaty Organization (NATO) for more than six decades, had agreed in 2012 to the deployment of the alliance's new radar system at Kurecik to strengthen NATO’s defense system against any potential Iranian ballistic missile threats.

The Americans' confusion over Turkey’s logic concerning the CPMIEC deal also stemmed in part from Ankara's knowledge of US and NATO concerns about cybersecurity. Since the announcement of the decision, however, Ankara has not been able to seal the deal or free itself from the potential commitments it has made to the Chinese. In short, it remains unclear how Turkey will resolve the deal given that NATO has made it clear that Turkey will not be able to integrate the Chinese system into the alliance’s network.

In addition, in 2013 NATO deployed six Patriot anti-missile batteries along the Turkey-Syria border to bolster Ankara's defense against a potential missile strike from neighboring Syria. Addressing this issue, Jeffrey stated, “This is the third time the Patriot deployments have been made in Turkey since 1991 by NATO.” He also noted, “NATO in many ways watches Turkey’s back, and Turkey watches NATO’s back. So it is a long-term relationship. It is not something that can deviate easily.”

Erdogan's policies and attitude, however, might be hampering Ankara in achieving its goal regarding another matter. Turkey has been on the Financial Action Task Force’s gray list for the last two years for failing to address strategic deficiencies in its anti-money laundering efforts and measures to combat financing terrorism. Erdogan's lobbying of the Obama administration to have Turkey removed from the list has thus far failed to bear fruit.

Beltway insiders stressed to Al-Monitor that the United States has no desire to get involved in Turkey’s domestic affairs or be drawn into taking sides between Erdogan and the Gulenists. It thus sounds like Erdogan has not been able to convince the policymakers in Washington that the Gulenists have indeed established a parallel state and are trying to bring him down. The sense here, instead, is that the Gulenists helped Erdogan to consolidate his power and build up his image in the US capital and elsewhere. Of interest, Erdogan’s claim of having raised the issue of Gulen’s potential extradition to Turkey during a phone conversation on Feb.19 with President Barack Obama is in question. “There is no word about that in the transcript of the conversation,” one source told Al-Monitor.

“Erdogan has no friends left [in this town],” Michael Werz of the Center for American Progress told Al-Monitor. “Everybody is on the defensive. There is a sea of change. [Show] me one positive article about the Justice and Development Party.”

Regardless, it's clear that the United States is taking an approach that is cautious and distant to developments in Turkey and is eagerly awaiting the results of the March 30 local elections, which Erdogan has turned into a vote of confidence for his government.

Wilson observed, “The sense of crisis in Turkey today — the instability, the turmoil — and the sense not only here in Washington but also among a lot of other people [of] rising authoritarianism, these detract from the US-Turkey relationship. It detracts from Turkey’s ability to play a larger role in the region.” He concluded, “These images detract from our ability to objectively understand what is going on in Turkey.”