James Jeffrey, the special representative on Syria, met with senior Turkish officials amid renewed threats Ankara could send forces to a region controlled by a US-allied militia. 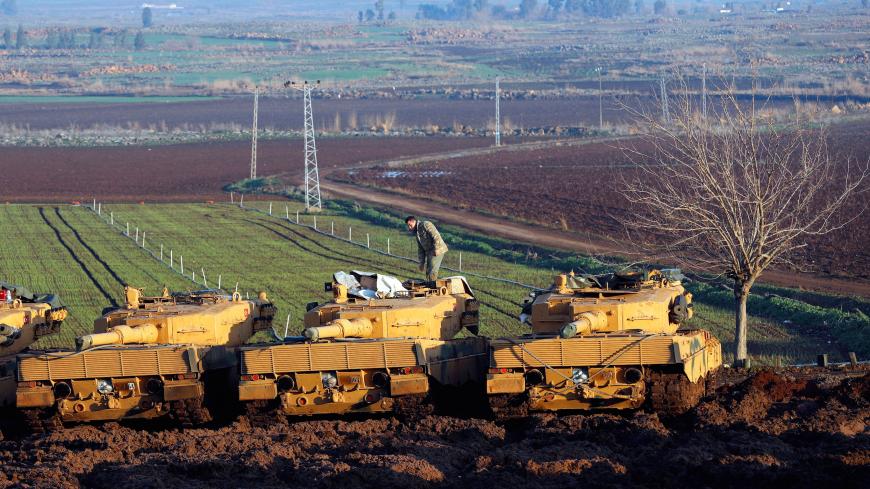 A Turkish soldier stands on top of a tank near the Turkish-Syrian border in Hatay province, Turkey, Jan. 28, 2018. - REUTERS/Murad Sezer

ISTANBUL — The United States dispatched a senior diplomat to Turkey on Monday for talks aimed at averting a unilateral invasion by the Turkish military into northern Syria as tensions near a boiling point following Ankara’s acquisition of a Russian-made missile system that its NATO partners fear foreshadows a split with the West.

A delegation led by James Jeffrey, the US special envoy on Syria, was in Ankara to meet Defense Minister Hulusi Akar and Foreign Ministry officials. It was not clear what the talks had produced at the time of publication.

It was but the latest round in long-running negotiations over the establishment of what Turkey calls a “safe zone” south of its border in a swathe of territory that is now under the control of the Syrian Democratic Forces, which is dominated by a Kurdish militia that Ankara considers a terrorist network.

The SDF has fought alongside US soldiers in Syria against the Islamic State since 2014 and the United States has vowed to protect them against a Turkish onslaught.

Jeffrey’s visit comes at a time of unprecedented friction after Turkey purchased a $2.5 billion Russian-made missile system that Washington says threatens NATO security. Now the United States is weighing sanctions to punish it for buying Russian the hardware and its perceived disloyalty to the alliance.

For its part, Turkey is applying its own pressure to limit the severity of or prevent the sanctions that could wreak havoc on its $750 billion economy that has stalled over the past year. Although Ankara has long warned it could enter northeast Syria, where the United States keeps an estimated 2,000 special forces troops, it revived those threats this month and has reportedly sent troops to the border.

Before Jeffrey even began his talks in the Turkish capital, Foreign Minister Mevlut Cavusoglu said in a television interview that if the meeting failed to yield an agreement, Turkey could launch a military operation to push back the SDF. Turkey is frustrated with US foot-dragging after more than a year of discussions over the fate of the Syrian town of Manbij, now under SDF control, and President Donald Trump’s pledge in December to pull out US soldiers and allow Turkey to administer the area east of the Euphrates River.

The main sticking points in the deliberations appear to be Turkey’s desire for full control of an expanse of of Syrian territory 30-40 kilometers (20-25 miles) wide, while the United States has said the zone should be 10 kilometers (six miles) without a permanent presence of Turkish troops.

Now, Turkey is mobilizing soldiers and the Syrian opposition forces it backs on the outskirts of Manbij, under the SDF’s control, in advance of a “widespread military action,” the Syrian Observatory for Human Rights reported over the weekend.

“In Washington, a potential cross-border operation as retaliation for US sanctions is taken seriously … and I believe these threats will be part of the decision-making calculus when it comes to going forward with sanctions against Turkey,” said Aykan Erdemir, a senior fellow at the Foundation for Defense of Democracies in Washington.

“What makes these [Turkish] threats credible is the fact that it’s not just rhetoric, but there has been a military buildup along the border, so the Turkish government seems to have backed up its threats with boots on the ground,” he told Al-Monitor.

In his Monday interview, Cavusoglu also said Turkey is ready to hit back against any US sanctions. “If the US exhibits a hostile stance against us, we will retaliate. This is not a threat or a bluff,” he said, adding that his government may review the status of Incirlik Air Base, which the United States has used since the mid-1950s and plays a key role in its operations in the Middle East.

Russia began sending components of the anti-aircraft system last week, dispatching 14 shipments of equipment with more to continue through early 2020. The arrival of the parts prompted Washington to kick Turkey out of its F-35 fighter jet program over worries the Russian system would compromise the stealth warplanes’ technology. Turkey argues the S-400 will not be integrated into NATO systems and does not threaten alliance infrastructure.

Now Turkey is waiting to see if the United States follows through with congressional sanctions and is pinning its hopes on Trump’s amicable relationship with Turkish President Recep Tayyip Erdogan to forestall any severe measures against its economy.

Trump has expressed understanding over the S-400 purchase and last week reiterated that Erdogan was forced to buy the batteries because the Barack Obama administration would not sell US-made Patriot missiles to Ankara. (In fact, the US government agreed in 2013 to sell Turkey the Patriot system, and Trump’s administration also approved the sale.)

Trump and Erdogan remain in close contact over the issues dividing the allies. The American leader opposes sanctions against Turkey and has the power to delay or block any penalties, Cavusoglu said in the interview.

Trump has to dissuade his own party’s lawmakers who want to punish Turkey and is reportedly meeting with Republican senators on Tuesday to discuss the potential sanctions.

“Turkey’s game plan is to bet it all on President Trump’s intercession, hoping he will shield Turkey from sanctions. [This] is based on a shocking misreading of how things work in Washington … whereby the US president has wide authority to call the shots,” Erdemir said. “This might result in a disappointment for Erdogan and a lesson of the internal workings of US politics.”

But while the dispute marks a turning point in the US-Turkish relationship, Erdemir does not see a “radical break” ahead. Trump’s standoff with Iran, developments in Syria and worries that Turkey could move even further into Russia’s orbit may temper Washington’s response, he said.

Cavusoglu dismissed the recent handwringing out of the United States that Turkey’s defiance over the S-400s signals it is breaking up with the West. “It’s impossible to remove Turkey from NATO. I laugh at this criticism of an orientation shift,” Turkey’s top diplomat said.

by Murielle KASPRZAK and Joseph SCHMID | AFP | May 26, 2022
END_OF_DOCUMENT_TOKEN_TO_BE_REPLACED