As Idlib burns, Turkey focuses on another corner of Syria

Last year, Turkey helped stave off an attack on Syria’s last rebel stronghold of Idlib, but the truce may be crumbling as regime and Russian bombardments kill dozens. 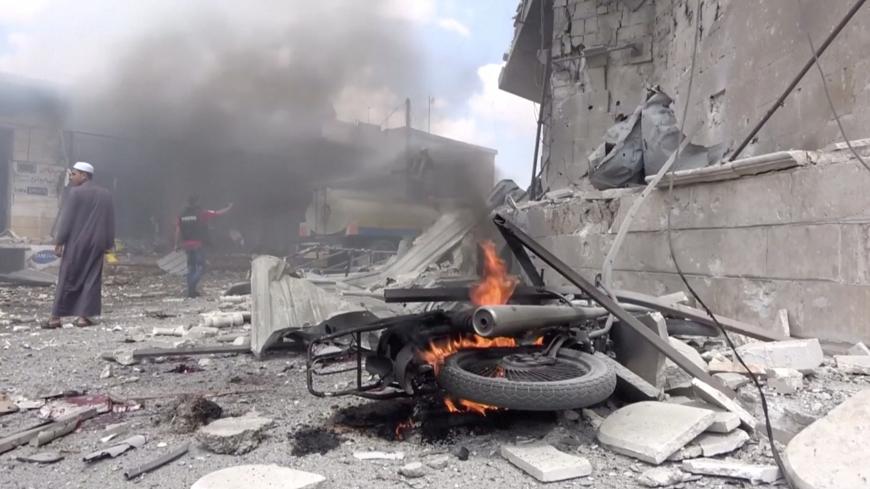 A motorbike burns after an airstrike in this screen grab from a video said to be taken in Idlib, Syria, July 16, 2019. - White Helmets/REUTERS

ISTANBUL — Dozens of people were killed in airstrikes in the Syrian province of Idlib this week in what the United Nations called a “worsening nightmare,” as a truce negotiated between Russia and Turkey for the last rebel stronghold threatens to shatter.

Turkish President Recep Tayyip Erdogan won a reprieve from a Russian-backed Syrian government onslaught on the northwestern province in September 2018. Now his focus appears to have shifted to the other side of Syria amid a Turkish troop buildup that portends an incursion east of the Euphrates River against a Kurdish militia Ankara deems a terrorist group.

In a series of raids on Idlib, at least 59 civilians were killed and more than 100 people wounded on Monday, according to a UN statement that called for an immediate halt in the attacks to protect the three million civilians living in the province.

The Syrian Observatory for Human Rights said Syrian President Bashar al-Assad’s forces as well as their Russian allies carried out the bombardments from the air and ground as they push to retake Idlib in what could be the last — and bloodiest — battle in the country’s eight-year war.

Turkey and Russia, which support opposing sides in the conflict but have crafted a close partnership in other areas, agreed to a de-escalation zone in Idlib that has been severely tested since April, when Syria and Russia stepped up attacks in the province.

Turkish Foreign Minister Mevlut Cavusoglu said on Monday the attacks on Idlib should end. “Russia has a special duty. Stopping the regime’s attacks is Russia’s responsibility,” he said in a television interview while the assault was underway.

But Ankara’s protestations to Moscow have been otherwise muted. Cooperation with Russia has allowed Turkey to take 1,500 square miles (2,400 square kilometers) of Syrian territory along its border since 2016, which has restrained Syrian Kurdish ambitions for self-rule. Turkey is also in the process of acquiring the Russian-made S-400 missile system, defying its NATO allies and the threat of US economic sanctions.

Ankara has called for a summit with Russia and Iran early next month in a bid to quell the violence. A new refugee crisis could send tens of thousands across the border to Turkey when it is straining to care for the 3.5 million refugees it already shelters. The government faces public pressure to curtail the movements of refugees within Turkey amid an economic slowdown.

Reports have emerged that Turkey is deporting hundreds of Syrians who entered illegally or are believed to have engaged in criminal activities. Police have also detained legal refugees in Istanbul whose residence permits require them to live elsewhere. The governor’s office set an Aug. 20 deadline this week for Syrians without Istanbul permits to leave the city.

“Turkey’s key vulnerability in Syria is Idlib because of the potential for more refugees,” Soner Cagaptay of the Washington Institute for Near East Policy told Al-Monitor. “Putin knows he can threaten to send in millions of refugees and create social unrest in Turkey. This is one reason why Turkey did not have the luxury to walk away from the S-400 deal. The sad part is Russia may still do that.”

Turkey has instead directed its anger toward US policy in Syria’s relatively more stable northeast, which is dominated by the Kurdish-led Syrian Democratic Forces. The Pentagon’s partnership with the SDF since 2014 to fight the Islamic State has outraged Turkey, and it has vowed to launch an incursion to repulse the militia from its border. Hundreds of US special forces remain in the area.

The US special envoy for Syria, James Jeffrey, met Turkish diplomats and Defense Minister Hulusi Akar on Monday to discuss a buffer zone along the Turkey-Syria border. Akar outlined Turkey’s demands, which include the expulsion of the SDF from the area and the collection of its weapons. The two sides plan to establish a “safe zone … in a coordinated manner” and discussions will continue between military officials in the coming days, the Defense Ministry tweeted on Tuesday.

The United States and Turkey remain divided over the zone’s size, the administration of Kurdish-majority towns and control of its airspace, among other sticking points, reported Al-Monitor columnist Metin Gurcan. Turkey still needs to convince the United States to allow it access to the airspace to support such an offensive, he wrote.

In a sign of the looming violence, Turkey fired on SDF targets late on Monday after six people were wounded when a rocket from Kurdish-controlled territory in Syria hit the Turkish town of Ceylanpinar.

Jeffrey’s talks took place as President Donald Trump weighs whether to sanction NATO member Turkey for its purchase of the Russian S-400 missile defense system, which could undermine the alliance’s security assets. Trump has assured Erdogan he does not face sanctions, despite Congress’ threat to punish Turkey, the Wall Street Journal reported. An announcement on sanctions could come as early as this week, it said.

“A Turkish incursion is more likely to take place after the sanctions are unveiled, because it would allow Erdogan to frame this as retaliation,” said Cagaptay. “We could see a modus vivendi where Trump delays sanctions and Turkey delays an incursion into northeast Syria [because] both sides know that they will trigger the other side.”

Policy-makers may also worry that crippling US sanctions on Turkey’s already battered economy would push it further into Russia’s orbit. In an op-ed on Monday, Ibrahim Kalin, a senior adviser to Erdogan, blamed Turkey’s troubled relations with the West on the United States and Europe having ignored its security concerns.

“Turkey’s repeated attempts to purchase the Patriot missile system from the US have unfortunately resulted in no deal. What was worse was the decision by the Obama administration to remove Patriots from Turkey in 2015, while Turkey remained under threat from the Syrian war. Turkey’s efforts to purchase Patriots over the past two years have produced no results. The Russian air defense system became not a choice but necessity for Turkey,” Kalin wrote in his Bloomberg piece.

For its part, Russia not only clinched a $2.5 billion missile sale that is likely to see further integration of the two countries’ defense networks, it is increasingly unfettered in northwest Syria and likely cheering on the standoff in the northeast, possibly viewing the threat of a Turkish operation as the best chance for its ally Assad to retake the rest of war-weary Syria.

“Russia knows that in the eventuality [of a Turkish operation against the SDF], the US will probably step down rather than risk spilling American blood,” Cagaptay said. “Faced with the prospect of a Turkish invasion, [the Kurds] will pick Assad coming back. … Russia is hoping that much of eastern Syria will return to Assad without a single bullet being fired.”