As many as three million refugees could be settled in northeast Syria if Turkey establishes a buffer zone along its border, President Recep Tayyip Erdogan told world leaders at the United Nations summit, though a meeting to persuade US President Donald Trump did not materialize. 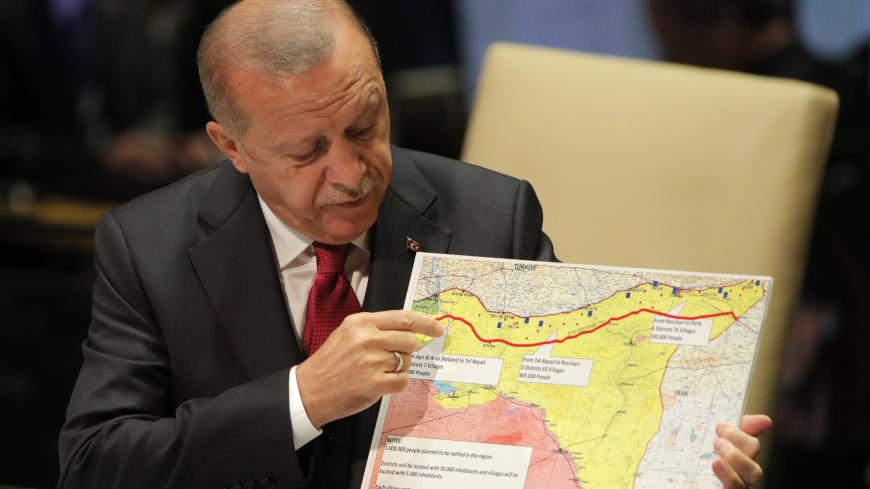 Turkey's President Recep Tayyip Erdogan holds up a map as he addresses the 74th session of the United Nations General Assembly at the UN headquarters in New York City, New York, US, Sept. 24, 2019. - REUTERS/Brendan Mcdermid

ISTANBUL — Turkish President Recep Tayyip Erdogan took his case for a "safe zone" in northeast Syria to the world stage this week, telling the United Nations General Assembly that as many as three million refugees could be moved to an area of the war-torn country now controlled by US-allied Kurds.

Turkey wants to create an initial “peace corridor” 30 kilometers (19 miles) deep and 480 kilometers (300 miles) long east of the Euphrates River to repatriate Syrians who have fled the eight-year war that has killed a half-million people, Erdogan told world leaders gathered for the UN’s annual meeting on Tuesday.

“With international support, we can settle two million Syrians here, and if we expanded the area’s depth to the Deir ez-Zor-Raqqa line, we can lift the number of Syrians from Europe and other parts of the world returning home to three million. Turkey is determined to achieve this issue and has started its preparations,” he said.

Turkey has welcomed 3.6 million Syrians fleeing violence since 2011 and has spent close to $40 billion caring for them. But public discontent with the foreigners is brewing, especially amid a painful economic downturn, and the buffer zone could serve as a release valve if the government can repatriate Syrians there as well as its best bet to stymie Kurdish autonomy.

A large swath of northeast Syria is run by the Syrian Democratic Forces, a militia dominated by Kurds that captured the territory from the Islamic State with the support of the United States. Turkey views the Kurdish fighters as terrorists due to their affiliation with insurgents who have waged an armed campaign inside Turkey since 1984.

The United States and Turkey reached a breakthrough on the buffer zone last month after protracted negotiations and have begun coordinating patrols. But in recent weeks Erdogan has revived his threats to launch a unilateral invasion that risks a confrontation in an area of Syria where an estimated 1,000 American soldiers are present.

The dispute is but one of the issues dividing the NATO allies. Turkey also faces possible US economic sanctions for buying the $2.5 billion S-400 antiaircraft system from Russia that NATO fears will undermine its security, and Turkish pilots have already been kicked out of the US-led F-35 fighter jet program.

Erdogan’s real purpose in attending the UN General Assembly summit was to convince US President Donald Trump to accept more of Turkey’s demands on the buffer zone, a pro-government columnist wrote this week.

By Wednesday, the two men still had not met and a meeting had not appeared on Trump’s schedule as of this writing.  Erdogan and Trump did attend the same diplomatic reception, but Erdogan turned down Trump’s lunch invitation on Tuesday because the table included Egyptian President Abdel Fattah el-Sisi, whom the Turkish leader describes as a “tyrant” after he seized power from the country’s first democratically elected president in 2013.

Trump and Erdogan did speak by phone before they arrived in New York, and the Turkish leader held talks in New York with US Senator Lindsey Graham, who has acted as a kind of mediator with Turkey in the past. Graham told reporters efforts were underway to bring Turkey back into the F-35 program. Senior aide Ibrahim Kalin met with James Jeffrey, Washington’s Syria envoy, in New York and the two men agreed on “intensifying joint efforts” on the buffer zone.

Erdogan met the US ambassador to Turkey, who reportedly proposed a way out of the S-400 imbroglio by promising to lift bilateral trade to $100 billion, readmit Turkey to the F-35 program and sell Ankara US-made Patriot missiles if the military doesn’t activate the Russian system, according to news reports. Turkey has previously dismissed suggestions it will mothball the S-400s.

However, Erdogan prefers to do business face-to-face with Trump, with whom he says he enjoys a “personal bond.” He was able to persuade him to agree to withdraw US forces from Syria last year and that it wasn’t his fault he acquired the Russian missile in June.

“Maybe Trump’s advisers have counseled him not to see Erdogan [with the] realization that the safe zone is an issue between the two militaries,” said the Washington Institute for Near East Policy's Soner Cagaptay, who recently published a book on Turkish foreign policy called “Erdogan's Empire: Turkey and the Politics of the Middle East.” “The bureaucracy in America is trying to downgrade this issue from the presidential level to the technocratic level because Erdogan, in one-on-one sessions with Trump, knows how to get what he wants.”

Returning millions of Syrian refugees, who are overwhelmingly Sunni Arabs, to an arid corner of the country now controlled by Kurds may not be realistic without a broader political resolution of the conflict. But creating space for a few hundred thousand Syrians to return would address domestic political concerns as well as force Europe, which is loath to see another migrant crisis at its border, to back Turkish control of the buffer zone, Cagaptay told Al-Monitor.

“It is not in vain that we have earned the title of the world’s most generous provider of humanitarian aid and accepted the most displaced people,” Erdogan said in the potent speech at the UN, during which he held up an image of a Syrian boy who perished trying to reach European shores and chided the international community for failing to shoulder more of the burden.

But Erdogan has also threatened to “open the gates” to encourage migrants to attempt the perilous crossing to Europe if international support for the safe zone does not emerge. Irregular migration to Greece from Turkey increased sharply last month, most of them from Afghanistan, aid workers say.

Syrians appear to be staying in Turkey despite new restrictions on their movements and reports of forcible deportations to Syria that Turkish officials deny. Still, the change in public sentiment may make them more vulnerable. Mobs in the southern city of Adana attacked Syrian homes and businesses last week following false allegations that a Syrian had sexually abused a boy. Police later arrested a Turkish citizen in connection with the assault.

Separately, Adana was the scene of a bombing that targeted police on Wednesday and wounded five people. There were no immediate claims of responsibility.