Turkey squeezed between Russia, US in Syria

Turkey, pressed between Russia and the United States, is headed toward a foreign policy crash in addition to an economic one. 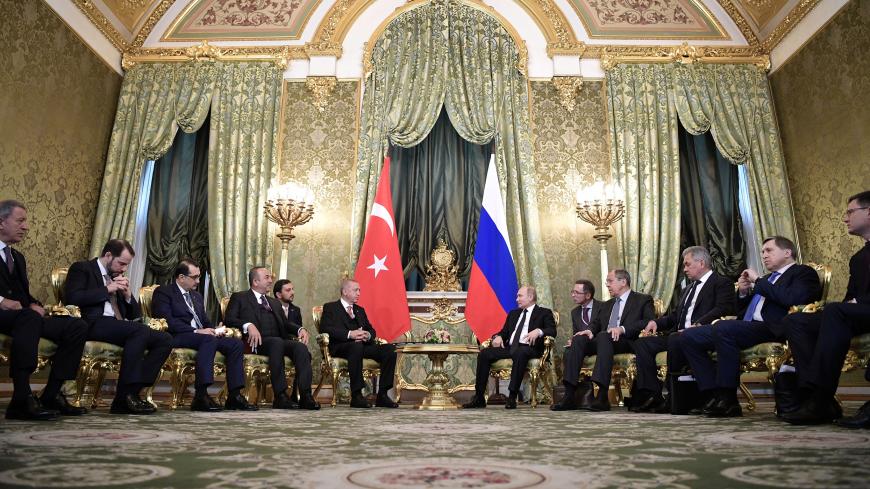 The US administration’s top Syria envoy, James Jeffrey, who is trying to broker a deal between Turkey and Syrian Kurdish groups for a proposed safe zone in northeast Syria, recognizes the irreconcilable positions of the two parties, and is trying to buy some time through continuing the talks, a source in Washington close to the envoy told Al-Monitor.

Turkey’s fateful Istanbul election rerun is fast approaching. For Turkey, it is more than just an election in Istanbul, as the vote could determine whether the Recep Tayyip Erdogan era in Turkish political history expires or not.

President Erdogan has transformed the June 23 election do-over into a showdown over his authoritarian rule involving Turkey’s highly polarized society; these divisions were deliberately crafted by Erdogan himself to consolidate his base.

Another inevitable development is approaching as well: An economic collision for Turkey’s debt-ridden economy. The developments in the foreign policy sphere will bear a strong influence both on the Istanbul election and the Turkish economy as Ankara is under intense pressure — if not crossfire — from Washington and Moscow.

On May 21, an alarming news report heralded dire consequences for Turkey.

CNBC reported, “Turkey has a little more than two weeks to decide whether to complete a complex arms deal with the US or risk severe penalties by going through with an agreement to buy a missile system from Russia, according to multiple people familiar with the matter. By the end of the first week of June, Turkey must cancel a multibillion-dollar deal with Russia and instead buy Raytheon’s US-made Patriot missile defense system — or face removal from Lockheed Martin’s F-35 program, forfeiture of 100 promised F-35 jets, imposition of US sanctions and potential blowback from NATO.”

The report continued, “As it stands now, the US State Department’s current offer is the final one, multiple sources who spoke on the condition of anonymity told CNBC when asked whether the deadline had room for more extensions.”

A few hours later, Reuters reported that Turkish Defense Minister Hulusi Akar said Turkey is preparing for potential US sanctions over its purchase of S-400 missile defense systems. Erdogan and Foreign Minister Mevlut Cavusoglu have persistently emphasized that Turkey will keep its promise on the S-400 deal. The delivery is expected to begin in July. According to the Reuters report, Akar, with some nuance and caveat, reiterated the Turkish position.

The Reuters report said, “While Washington has warned that Ankara faced sanctions under its Countering America’s Adversaries Through Sanctions Act (CAATSA) if it presses on with the deal, Turkey has said it expected US President Donald Trump to protect it."

Reuters also said the Turkish lira has been sliding in part over worries about the potential US sanctions. The news agency added, "Among its other disputes with Washington is the strategy in Syria east of the Euphrates River, where the United States is allied with Kurdish forces that Turkey views as foes.”

Nicholas Danforth, a Turkey expert in Washington, said of Akar’s statement, “Ankara still seems to be pushing for ‘We buy the S-400s and you don’t sanction us solution.'”

Akar’s words that Turkey, in its talks with the United States, sees "a general easing and rapprochement on issues including the east of the Euphrates, F-35s and Patriots," seem unlikely to hold water.

A source in Washington close to James Jeffrey, the US special envoy to Syria who is trying to broker a deal for northeastern Syria east of the Euphrates, told Al-Monitor Jeffrey is trying to buy time.

The source, who did not want to be identified, said Jeffrey is confronted with the irreconcilable positions of Turkey and the Syrian Syrian Democratic Forces (SDF) that control northeastern Syria. The Kurdish forces that the Turkish government declares as its primary adversary provide the military command and the backbone of the SDF.

When it comes to Syria, the predicament of Turkish-US relations hinges on what the source described as “the John Bolton factor.” The US national security adviser, who is considered to be the mastermind of the latest American political moves against Iran, has no interest in conceding northeastern Syria to Turkey, which seems as if it has more in common with Tehran than Washington.

Ankara is aware that unless it compromises with Washington in the Syrian theater, adverse consequences will bear a further lethal impact on the Turkish economy, which is already in crisis.

A showcase of Erdogan’s weakened hand has been the onslaught of the Syrian army, with Putin’s encouragement, in Idlib; this has drawn ire from Turkish leaders from Erdogan to Cavusoglu to Akar.

In Metin Gurcan’s Al-Monitor assessment, “Turkey is trying to maintain warm relations with Russia to revive de-escalation efforts in Idlib and to continue its dialogue with the United States to establish a safe zone in Kurdish-dominated areas. However, this strategy apparently has yet to satisfy the United States or Russia. The Idlib offensive is a clear signal of this failure. Metaphorically speaking, the Idlib offensive is Russia's way of telling Turkey that it won't allow Ankara and Washington to set up a new game in Syria without its consent.”

Russian Foreign Minister Sergey Lavrov on April 29 had said that the situation in Idlib cannot go on like this forever, adding that the Syrian government has every right to ensure the safety of its people on its territory.

Fabrice Balanche, a French expert on the Levant and a fellow at the Washington Institute, said that Idlib will be overrun by the Syrian army before fall and that the operation to reclaim Idlib started in late April. In a recently published interview, Balanche outlined Russia's modus operandi in Idlib and Turkey’s helplessness against it: “Russia forced the hand of Erdogan, who proved to be unable to enforce the terms of the Sochi agreement of September 2018, to create a demilitarized zone and free movement on the Aleppo-Latakia and Aleppo-Hama highways. … By provoking an influx of refugees and jihadis who might seek refuge in Turkey, Moscow urges Ankara to buy the Russian S-400 air defense system to create a break between the Americans and the Turks. There is currently a showdown between these three countries.”

It should be seen as coincidental that Erdogan explained Turkey’s unswerving commitment to go forward with the S-400 deal a day after the heavy bombing in Idlib by Russian aircraft and Syrian artillery. The Russian and Syrian military action jeopardized the safety of Turkish military personnel stationed in Syria’s northwestern province, which is mainly under the control of Hayat Tahrir al-Sham, a jihadi organization in Syria that is a former al-Qaeda branch.

Idlib, with its potential for a flow of hundreds of thousands of new refugees into Turkey, which is already hosting almost 3.6 million Syrians, is a nightmare for Ankara. UN officials emphasized that Idlib could become the “worst humanitarian tragedy of the 21st century.”

Turkey’s overriding interest in Idlib is to keep the situation calm to avoid a bloody military solution that would swell the ranks of millions of refugees, Aron Lund said in a May 21 report. He quotes Dmitri Trenin, the director of Carnegie Moscow Center, as saying that “maintaining some sort of a status quo in Idlib is preferable to either supporting a Syrian offensive or pressuring Turkey hard on Sochi commitments. Russia has been tolerant of Turkey’s apparent failure to fulfill its part of the Sochi agreement.”

That means Russia is still trying to keep Turkey on board to create deeper fissures in NATO and between Turkey and the United States. That also means that Turkey cannot tear away from the S-400 deal that easily.

Turkish foreign policy had never been so squeezed between Washington and Moscow and at the mercy of both or either of them. While the disastrous consequences of Erdogan’s foreign policy and its adverse effects on the economy are imminent, the election rerun in Istanbul has become even more important.

by Murielle KASPRZAK and Joseph SCHMID | AFP | May 26, 2022
END_OF_DOCUMENT_TOKEN_TO_BE_REPLACED