Turkey is sending military reinforcements to its border with Syria after two missiles were recently launched from Syria toward a border city, portending an imminent Turkish offensive in the area. 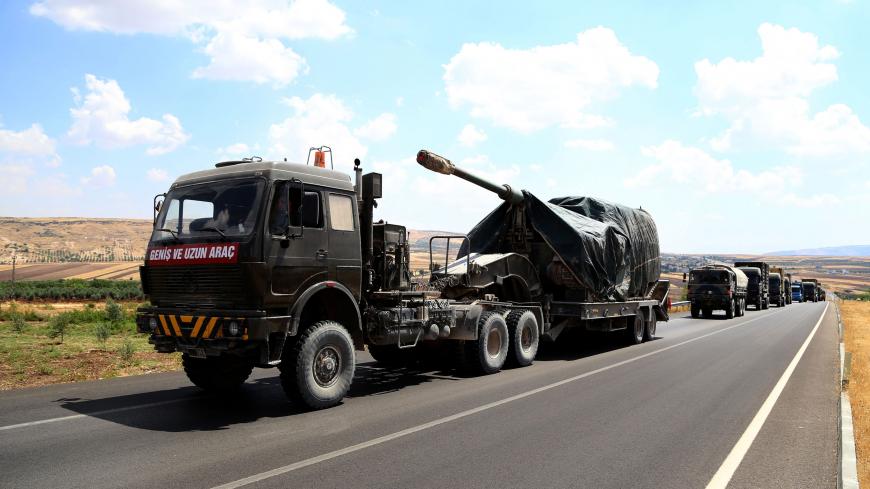 A Turkish Armed Forces military convoy, consisting of armored vehicles, ammunition and howitzers, are being dispatched from Kilis towards Gaziantep to support the units at the Syrian border, on July 14, 2019, in Kilis, Turkey. - Izzet Mazi/Anadolu Agency/Getty Images

QAMISHLI, Syria — On the evening of July 22, two missiles were launched from Ras al-Ain in the countryside of al-Hasakah governorate in northeastern Syria toward Ceylanpinar on the Turkish-Syrian border. Turkish media reported that six people, including a child, were injured, while it remains unclear who was behind the missiles.

The Turkish Ministry of Defense said on July 23 in a statement carried by Anadolu News Agency, which is close to the Turkish government, that its forces on the Syrian border destroyed seven military positions belonging to the Syrian Democratic Forces (SDF) using heavy weapons in response to the two missiles launched from Syria. The statement indicated “the response was a legitimate defense mechanism.”

In a statement the SDF released July 23 on their website, they pledged to reveal the source of the missiles and expose the perpetrators of the incident they describe as provocative. They asserted that the perpetrators are unknown individuals who want to spark strife and destabilize the region.

The two missiles were launched July 23 as Ankara sent military reinforcements to Turkish forces and the Turkish-backed armed Syrian opposition on the northwestern borders of Hasakah governorate, as the Turkish army braced for an imminent attack on Ras al-Ain and Tell Abyad.

The missiles launched from Syria toward Turkey bring to mind an audio recording that revealed a secret meeting between Turkish officials, namely former Minister of Foreign Affairs Ahmet Davutoglu; his undersecretary, Feridun Sinirlioglu; Chief of Intelligence Hakan Fidan; and Deputy Chief of Staff Yashar Guler. In the recording, the group was discussing a pretext that would be accepted by the international community for a Turkish military intervention in Syria, which a German magazine leaked in 2015.

In the recording, Fidan said, “If needed, I will send four men to Syria, then I will ask them to launch mortars on the Turkish side of the borders, and that would create the pretext for war.”

The Syrian Observatory for Human Rights reported July 28 the explosion of a booby-trapped motorcycle in al-Mahmoudia neighborhood in the center of the city of Afrin, which is under the control of the armed Syrian opposition. A Syrian opposition leader told the opposition’s Ugarit Post on condition of anonymity that the Turkish army executed the bombing that rocked Afrin, killing and wounding 15 people. The leader noted that Turkey did this to stir strife among Syrians.

Turkish Minister of Foreign Affairs Mevlut Cavusoglu said in a press conference in Ankara July 24 that the new US suggestions related to the safe zone do not satisfy Turkey, and he accused the United States of stalling.

He added, “If the safe zone is not established and if Turkey keeps getting threats, we will launch a military operation in the eastern Euphrates.”

On July 23, US Special Envoy for Syria James Jeffrey visited Ankara and held talks with Turkish Minister of Defense Hulusi Akar to discuss a safe zone in northeastern Syria.

Freelance journalist Mostafa Abdo told Al-Monitor, “Turkey wants the safe zone to extend from the eastern bank of the Euphrates to Tell Abyad at a depth of 40 kilometers (24 miles), and to include Kobani and Tell Abyad cities so that it can control them militarily like it did Afrin. Turkey also wants to push away heavy and light weapons of Kurdish units to a distance of 20 kilometers (12 miles) from the borders, control the airspace of the buffer zone and empty the area of its original Kurdish citizens, forcibly displace them and help settle Syrian Arab refugees, like in Afrin.”

Meanwhile, the US Embassy in Ankara issued a statement in which it described the talks Jeffrey held in Turkey as “sincere, positive and fruitful.”

Freelance Kurdish journalist Shawrash Darwich believes Turkish military mobilization on the Syrian-Turkish border does not portend an imminent war. He said the Turkish military alertness and the accompanying threats come amid a highly complicated situation after Turkey completed the S-400 deal with Russia. This deal has caused tension in US-Turkish relations, and the United States threatened to punish Turkey as per the Countering America’s Adversaries Through Sanctions Act and to deprive it of the F-35 fighters. This troubled situation does not give Turkey the green light to implement its military operations in the eastern Euphrates, he explained.

Abdo said Turkish President Recep Tayyip Erdogan “is exporting the domestic crisis to Syria, especially after his ruling party lost in the Istanbul elections and most party leaders left and established new parties. This portends an imminent collapse of the Justice and Development Party, not to mention the suffocating economic crisis in Turkey and the accumulated financial debts.”

The Turkish Ministry of Defense noted in a statement July 23 that Akar told Jeffrey he was concerned about the meeting between Commander of US Central Command Gen. Kenneth McKenzie, Deputy Special Envoy for the Global Coalition to Defeat ISIS William Roebuck and SDF Commander-in-Chief Mazlum Abdi July 22 in the town of Ain Issa.

Abdi said in a press statement following his meeting with McKenzie that the meeting revolved around “the current situation and tensions on the joint borders between Turkey and the areas of north and east Syria and ways to reach a solution. The two sides share several perspectives to face the problems threatening the security of the region, and the SDF and the international coalition meet on most issues.”

In an interview with the TGRT Haber television channel July 22, Cavusoglu threatened to take retaliatory steps against US military assets in Turkey — namely the Incirlik Military Air Base and the radar station in Kurecik — if Washington imposes sanctions on Ankara for buying Russian S-400 missile defenses.

Mustafa said that Washington has responded to Turkey’s threats regarding the Incirlik Military Air Base by expanding its military bases in the east of the Euphrates, especially in Hasakah, Kobani, Qamishli and Rmeilan.

On July 25, trucks loaded with tools entered the eastern Euphrates to build a new military base for the US-led coalition near al-Ghanamiya village, 6 kilometers (3 miles) to the south of al-Darbasiyah, after establishing a runway for fighter jets in the west of the village, amid talks about a safe zone to deter potential risks from Turkey.